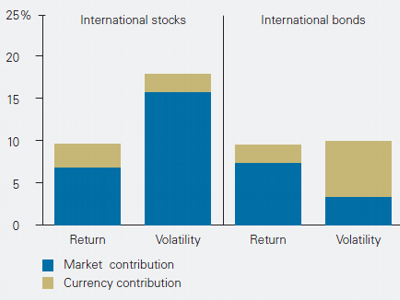 Executive summary. Traditionally, U.S. investors have achieved
diversification of a domestically focused portfolio primarily through the
use of international equities. However, over the past ten years the global
investable market has changed markedly, largely as a result of the growth
and maturation of world bond markets combined with the ongoing
globalization of businesses and capital flow. International bonds now
make up more than 35% of the world’s investable assets, and yet many
domestic investors have little or no exposure to these securities. Are there
empirical or practical considerations that would justify such a home bias in
U.S. investors’ portfolios?

Generally this paper has a lot of great information. Foreign bonds are the largest investment category in the world, yet are surprisingly absent from most U.S. investor’s portfolios. There is much to be gained from the addition of foreign bonds, which we consider one of six important asset classes. The study finds that emerging market bonds add to a portfolio whether they are hedged or unhedged. These are all conclusions we agree with wholeheartedly.

Hedging a foreign bond investment dampens returns as the fund must purchase options against each currency fluctuation. These options expire as worthless if the dollar moves sideways or declines in value but protect your investment if the dollar strengthens against the foreign currency.

I would agree that hedging anything against movements in the dollar reduces volatility when measured in dollars. But dampening volatility ultimately means dampening return. A return of zero also has a volatility of zero. Measuring everything in dollars makes sense only so long as the dollar remains a safe store of value and does not experience the rollercoaster ride of the flood of demand in 2008 and then the flood of supply in 2009.

Even in the Vanguard study, the chart shows  their analysis:

Losing 2.4 percent of the return annually over the past 25-plus years is a significant loss. It reminds me of my favorite Paul Volker quote, “You can’t hedge the world.” In other words, the insurance of hedging is more than I would like to pay.

I used Morningstar Principia Pro to look at two bond funds, PIMCO Foreign Bond (USD-Hedged) Institutional (PFORX) and PIMCO Foreign Bond (Unhedged) Institutional (PFUIX) over the last year and the last five years. Just over the past year the hedged version returned 5.37% and the unhedged version returned 13.85% (year ending 5/31/2011). Losing 8.48% over one year is a lot of practical return to give up for a theoretical reduction in volatility.

The five year returns were no better. PFORX averaged 6.42% verse PFUIX’s 9.33%. (five years ending 5/31/2011). Again, losing 2.91% of the return annually is not something I would readily conceed.  Here are those two investments in share price (which doesn’t include dividends) over the past five years. 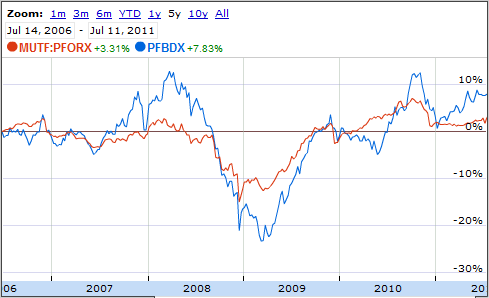 As an aside, there are two reasons why emerging market bonds are a good investment: They aren’t dollars and they aren’t Euros. Since both the U.S. and much of Europe is in the ‘Ring of Fire’ these currencies may not hold their purchasing power as well as emerging market countries with less active Feds devaluing their currency.

Volatility is an important measure, but not in isolation. Make it part of a complete portfolio construction.