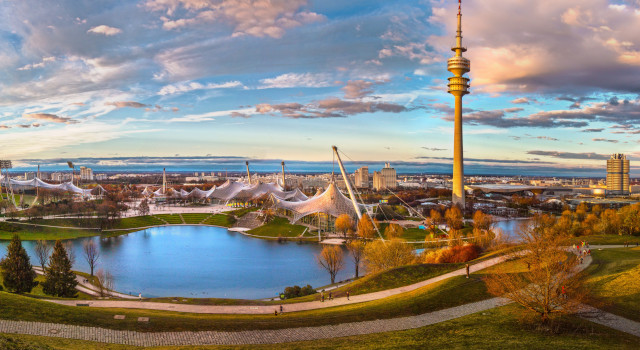 From Salzburg, Austria our U-14 girl’s soccer team traveled to Munich, Germany. One game was rained out but we were able to finish the three-team round robin tournament. Germany is the largest economy in the European Union and Munich is obviously one of its major cities.

Germany’s economy is one of the weakest in the EU. Over the past three year Germany has shown little growth. Their stock market returns have been poor. IShares German (EWG) has a one-, three-, and five-year annualized return of 12%, 8.5%, and -3%, respectively. These returns are all two to three percent under the International Index.

Germany’s deficit exceeds the EU stability pact that German originally advocated. The deficit currently runs 3.6 percent of GDP (2004) and the accumulated debt is 65.6% of GDP.

Because of its weak economy, the country’s national income per person has dropped below the EU average. Reunification of the country has caused expensive public expenditures putting a drag on economic growth.

Non-wage labor costs are equal to 42 percent of gross wages and German unemployment is relatively high at 9.6%.

Recent forecasts for the growth of the German economy have been more optimistic, as are we, and plan on holding our investments there. Germany is the 18th most free county in the latest Heritage Foundation‘s Economic Freedom ranking.

Currently 53 stocks comprise iShares Germany. Siemens (SI) is the largest stock representing 9.73% of the fund. Siemens is a global electronics firm that provides telecommunications, network, and semiconductor equipment worldwide. Its stock has appreciated well, and appears to be a good investment.

After our first soccer match in Munich we were given hats with the Allianz Arena logo on them. The new arena in Munich will be used during the 2006 Men’s World Cup. From the Olympic tower, it looks like a giant sliver tire lying on its side complete with tread. It was named Allianz after the company that helped finance it.

Allianz has not done as well as Siemens, and I would not recommend emphasizing financial stocks at this time. Financial stocks often make their money on the spread between financial rates. As such you might think that the rates themselves don’t matter. But when rates rise, the volume of activity of financial transactions decreases. With rising interest rates there will be fewer homes refinanced and fewer loans initiated. As a result, I would underemphasize financial stocks in general.

Additionally, the German banking system has more regulations and is more dominated by public institutions than Italy or Austria.

DaimlerChrysler (DCX) is the sixth largest company in the German index. DaimlerChrysler is a true German-American company. It was formed in 1998 when Germany’s Daimler-Benz acquired Chrysler. Their brands include Dodge, Jeep, Chrysler, and Mercedes producing about 5 million vehicles a year. Daimler Chrysler also has not done well recently and does not look like it is poised to do well in the future.

Although Germany has not performed as well as any of the other freest major world economies in the past few years, we think their prospects going forward look promising.

We won our tournament in Germany and ended our European trip undefeated having scored 14 goals and only been scored on twice.