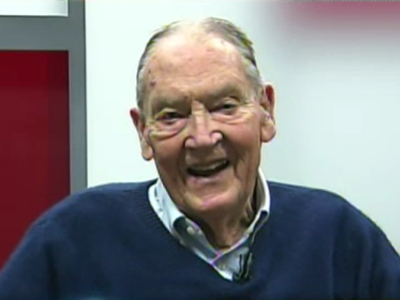 Generally speaking, Bogle says most broad index ETFs are just fine, but he warns investors that individual sector and country funds are probably “too narrow for most.” As for leveraged and inverse ETFs, Bogle says this is where the “fruitcakes, nut cases and lunatic fringe” can be found. “There’s just no possibility or any realistic way that you’re going to win that bet,” he says about leveraged ETFs.

And finally, when you factor in the reality that about 75% of ETF assets are held and whipped around by institutions, and therefore subject to high turnover, Bogle says it’s not the place for the weak of heart.

Bogle suggests that since the ETF is heavily traded that might be a problem somehow. I’ve written many articles agreeing with him about the folly of active trading, including The Power Of Passive Investing, How to Maximize Long-Term Returns, Ignore Daily Financial Noise, and Timing the Market Isn’t All Fun and Games.

Bogle says during the interview, “The ETF runs the risk of people trading it.” But just because other people are trading ETFs doesn’t effect if you any more if you own the Vanguard ETF or the Vanguard mutual fund. Since the underlying stocks in both are being bought or sold either way, the funds will both be moved. The ETF will move throughout the day, and the mutual fund will only be valued at 4pm at the close of the markets. But they will both be equally moved by the underlying trading of securities.

Bogle goes on to say that individual sector and country funds are probably “too narrow for most.” I would agree, but I think most people would misunderstand what he is suggesting.

Index investing is a great idea, but there are over 8,000 indexes. Most people think that index investing means the S&P 500, which is just half of one asset class. I wrote an article about a year ago pointing out that Bogle has a favorite index, and it isn’t the S&P 500.

If an investor wants to invest proportionally to the global markets you could get a single low cost index fund which includes all the developed and emerging markets in the Vanguard Total World Stock Index Fund Investor Shares (VTWSX) or the Vanguard Total World Stock ETF (VT). If you bought this index your investments would only be about 40% in the United States and you would be about 60% Foreign Stocks.

Now any deviation from this single investment has to be because you expect some subset of this total world stock index to have a better return than this index as a whole. The analysis of any alternative is dependent on two questions:

Just to be clear, we are not talking about short term expected excess return by frequent trading. We are talking about long term historical averages. Here are just some of the factors where we might expect to get some excess return: emerging markets, value, small cap, and freedom investing.

Take the last strategy for investing, which we call “freedom investing.” It is based on the idea that counties which are high in economic freedom and low in debt and deficit will perform better going forward. Our studies suggest that the bonus to this style of investing over the EAFE index is about 4% to 5% annually. This should not be surprising given that 61% of the EAFE index is invested in what Bill Gross called ring-0f-fire countries.

Now investing in the other 39% of the developed world is difficult. There isn’t a single ETF which includes this odd collection of countries high in economic freedom and low in debt and deficit. But there are specific individual country funds which allow an investor to overweight these countries which has the result of under weighting countries low in economic freedom or high in debt or deficit. And these country specific ETFs have low expense ratios of 0.50% to 0.55%.

Bear in mind, we would agree with Bogle that investing in one specific country is probably too narrow. But our strategy of over weighting a dozen developed countries along with the United States, the EAFE index and two dozen emerging market countries avoids the narrow investment strategy that Bogle rightly criticizes if you were to put a majority of your investment in a single country.

We use country specific investments for all of our clients. I did an analysis for one client and found that outside of the United States, this type of strategy put less than 3% in Hong Kong as one of the most heavily weighted foreign countries. We believe this strategy boosts average returns without suffering either from too narrow an approach nor excessive fees and expenses.

Finally, we would agree with Bogle that leveraged and inverse ETFs, Bogle is where the “fruitcakes, nut cases and lunatic fringe” can be found. Inverse funds break our Safeguard #4: Buy Investments That Trend Upward.

Just to be clear about what the Yahoo! title really means: ETF [Frequent] Trading (as opposed to ETF Buying, Holding or Rebalancing) is no way to invest.

If the investment world seems unfathomable to you join our mailing list, or better yet, consider signing up for our investment services.