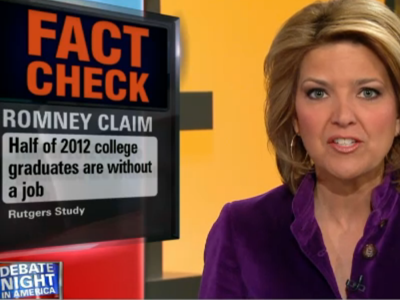 In “Youth Vote May Support More Economic Freedom” I wrote

In 2008 Obama captured 66% of the youth vote. But unlike the liberal ideological baby boom generation, millennials are more pragmatic. Having experienced liberal policies in action, some have realized that well-intentioned policies can have disastrous consequences. Support for Obama among the 18- to 29-year-old age group has dropped to 48%. Others simply won’t vote.

Not getting a decent job after college can be daunting.

In the second Presidential debate Romney said, “With half of college kids graduating this year, without a college – excuse me – without a job and without a college level job, that’s just not acceptable.”  The claim that half of college graduates don’t get a college level job comes from a study of government data done for The Associated Press by Andrew Sum, director of the Center for Labor Market Studies at Northeastern University. The resulting AP article “In Weak Job Market, One In Two College Graduates Are Jobless Or Underemployed” published on the Huffington Post read in part:

The college class of 2012 is in for a rude welcome to the world of work.

A weak labor market already has left half of young college graduates either jobless or underemployed in positions that don’t fully use their skills and knowledge.

Young adults with bachelor’s degrees are increasingly scraping by in lower-wage jobs – waiter or waitress, bartender, retail clerk or receptionist, for example – and that’s confounding their hopes a degree would pay off despite higher tuition and mounting student loans. …

While there’s strong demand in science, education and health fields, arts and humanities flounder. Median wages for those with bachelor’s degrees are down from 2000, hit by technological changes that are eliminating midlevel jobs such as bank tellers. Most future job openings are projected to be in lower-skilled positions such as home health aides, who can provide personalized attention as the U.S. population ages.

Obama’s appeal to the youth vote is to expand federal student aid. Federal student aid is an extremely popular program. Most of my life I’ve assumed the general societal assumption that student loans were basically good public policy. That they were among the “best” that government has to offer. My perspective changed when I read an article by Richard Vedder, Professor of Economics at Ohio University, entitled “Federal Student Aid and the Law of Unintended Consequences.” Libertarians don’t want to ignore the unintended harm caused by many good intentioned programs. If even these well-intentioned programs cause more harm than good we need to first do no harm. 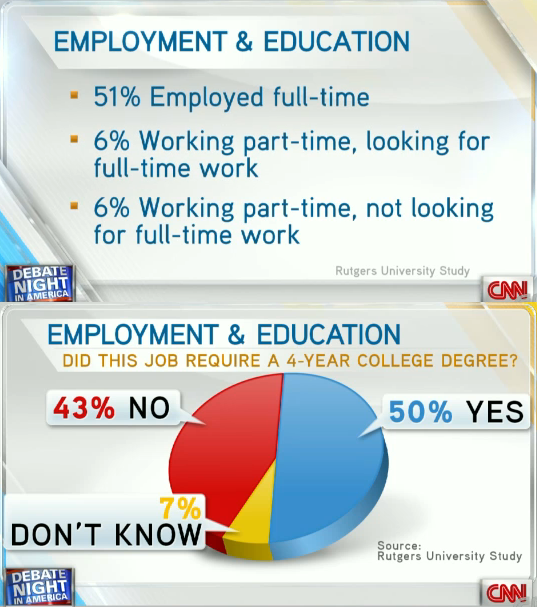 The top 3.8% of small business establishments are responsible for 64.0% of small business employment. Even Obama conceded that everything depends on if the top few percent he intends to burden are actually the job creators. That means that the welfare of college graduates, yea even the country is dependent on which candidate favors small business the most.

The entrepreneurial spirit will survive no matter which candidate is elected. Even Obama conceded in the second debate that “the free enterprise system is the greatest engine of prosperity the world’s ever known.” Government can hinder free enterprise or drive it overseas, but we can’t eradicate it entirely. Our choice in this election is if we favor the traditional American style of economic growth or we prefer slipping into the European malaise of greater taxation and regulation.