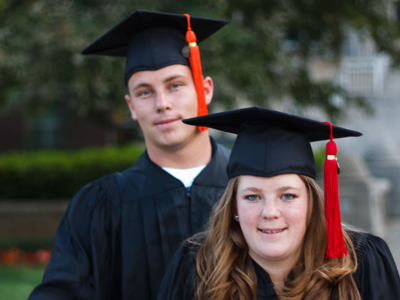 In “Youth Vote May Support More Economic Freedom” I wrote:

This [lack of employment] has hit young people the hardest. The median age for a first marriage has increased two years since 2007. And the rate of couples having children has decreased significantly.

Rising debt from college loans is one of the reasons for delaying marriage and children. The average debt burden at graduation is about $25,000. Part of the blame for this effect is the government’s student loan policies. In my column “Is Federal Student Aid Among the Best or Worst Government Programs?” I quoted Richard Vedder, Professor of Economics at Ohio University, who wrote:

Related to this problem, colleges themselves have no “skin in the game.” They are responsible for allowing loan commitments to occur, but they face no penalties or negative consequences when defaults are extremely high, imposing costs on taxpayers.

In fact the federal government now has a monopoly in providing student loans. Loans boost enrollment demand forcing the cost of education to rise much faster than inflation. And colleges need not worry about the student’s ability to pay it back nor even if the curriculum they are getting is worth the cost of the loan.

Loaning money with insufficient chance of repayment sounds a lot like the Community Reinvestment Act (CRA) where the government forced banks to make mortgage loans with insufficient chance of repayment. The CRA caused the financial crisis and brought down some of the largest financial institutions. No one could have anticipated the unintended consequences would be so catastrophe, but now we are making the same type of mistake.

It could even be that college loans are like the housing bubble.

Since 1978, the price of tuition at U.S. colleges has increased over 900 percent, 650 points above inflation, while tuition grants have been slashed from 70 percent to 34 percent. Student debt, on the other hand, has increased 511 percent since 1999, a rate that is twice as steep as the growth of housing-related debt.

In February, an interesting anecdote came out of the Fed Chairman Ben Bernanke’s semi-annual testimony to Congress: His son, who is in medical school in New York, is likely to rack up $400,000 in student loan debt in the process of getting his degree.

According to the Financial Times, the criteria for federally guaranteed student loans are not as stringent as for other kinds of debt, and many loans have already been securitised and sold off to investors.

The problem is colleges get money based on what they cost. So there is an incentive for them to cost more. And when they cost more they recruit better faculty and build better facilities. There is no incentive to cost less. As a result, college is less and less of a worthwhile investment.

Another aricle by Elizabeth Dwoskin on Bloomberg Businessweek entitled, “Will You Marry Me (After I Pay Off My Student Loans)?” supports the statistics I quoted in my article:

The lack of job prospects for young Americans isn’t dulling the pain. This age group has been hit harder by the downturn than others. That has caused many more young adults to enroll in school, thus saddling themselves with even greater student loan burdens, IHS says.

The Obama administration is trying to ease the pain. Late last year the president issued an executive order mandating that outstanding student debt be forgiven after 20 years, down from 25 years, and that student debt payments not exceed 10 percent of a graduate’s income, a drop from 15 percent.

Oddly enough, our attempts to override these economics make the market for higher education worse. Janet Lorin’s Bloomberg Businessweek in “$100k in College Debt, And That’s Without Interest” explains how colleges have no incentive to compete on cost.

And Karen Weise explains in “Student Loan Delinquencies Are Worse Than You Think” that:

Students may be struggling with debt more than we knew, according to a team of five researchers at the Federal Reserve Bank of New York. They explain that borrowers were late on $85 billion in student loans in the third quarter of 2011, which at face value is about 10 percent of the $870 billion in total outstanding student debt.

The researchers say student borrowers particularly struggle to repay their debt because many of them are recent college graduates, who are more likely to be unemployed or earn less than older borrowers. Pay for college grads is sharply down over the past decade, according to an upcoming study by the the Economic Policy Institute.

Such a well-intentioned program steals our youth, our love, our happiness, our faith and our self-esteem.