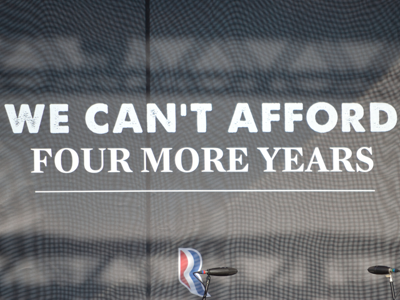 It appears as though financial advisors largely favor Romney:

2012-05-31: As reporting at USNews.com, a survey of financial advisers conducted at the SEI National Strategic Advisor Conference backed Romney at 74%.

2012-08-14: As reported in Financial-Planning.com, a poll conducted by the Financial Services Institute (FSI) found that 81% of advisors said they back Romney. This even though 47% believe that Obama will win a second term. The article quotes FSI President and CEO Dale Brown as saying, “This poll shows the economy and taxes are weighing heavily on the minds of advisors and in the planning they do for their clients. They are bracing themselves and their clients for a stagnant economy and an increase in capital gains taxes.”

2012-08-19: An InvestmentNew article found that “of the more than 900 advisers polled, 61% said they think that Mr. Ryan will boost Mr. Romney’s prospects of unseating President Barack Obama in November.”

It turns out having investments also increases your chance of voting Republican.

2012-04-18: The first MoneyShow.com®/The Independent Agenda® Investor Class Poll found that of the 1,295 investors polled Romney would win by 76%-24%. While the margin is wide, over half of those polled are registered Republican unlike the country which is 30% Democrat and 27% Republican. Oddly enough, “In 2008, the investor class was evenly split between Sen. Obama and Sen. John McCain, according to a poll in IBD. … Now the margin against him is enormous, amounting to a decisive repudiation of his leadership on the economy. It’s a much, much bigger spread than we’ve seen in previous elections.”

These statistics have improved since Larry Kudlow wrote this in Investor-Class Dead Heat:

Notable economists are having an easy time assigning blame.

Stanford economist John Taylor argues that every dollar taken from the private sector and channeled to the public-sector for government spending produces a GDP multiplier of less than one. Thus, the economy has gotten worse under Obama’s big-government policies. He would have been better off leaving the money in private hands.

Nobel Prize winner Gary Becker blames the current jobs deficit on the failure to resolve the budget and debt-ceiling issues, the lack of serious entitlement reform, and the absence of pro-growth tax reform toward broader and flatter tax rates.

Economic historian Mike Bordo just completed a study that shows how deep recessions are always followed by strong spring-back recoveries — all except this one.

And University of Chicago professor John Cochrane argues that the failure to get a strong recovery is not because of the financial crisis, but because of stupid policies.

I’m certain I lose clients because I’m outspoken about public policy issues. The standard advice is that there is “No profit in talking politics with clients.” But I regard being silent when incredibly bad economic policy is being advocated and adopted simply to generate more revenue inconceivable. Evil thrives when good people do nothing, including remaining silent. We need to have discussions about equality and the dangers of coercive power. And we ought to feel passionately about such issues.

Romney and Ryan aren’t my primary concern. I’m not really convinced they are fiscally conservative enough. But my greater worry is about questions I get such as, “What’s wrong with socialism?” Increasingly there is a bigotry of seeking punitive taxes on those who are the most productive. The term “rich” is used as an economic slur.  And we need people willing to vote for less government goodies. As George Will wrote in his latest column:

Twice as many Americans identify themselves as conservative as opposed to liberal. Nov. 6 we will know if they mean it. If they are ideologically conservative but operationally liberal. If they talk like Jeffersonians but want to be governed by Hamiltonians. If their commitment to limited government is rhetorical or actual.

Before Franklin Roosevelt, “liberal” described policies emphasizing liberty and individual rights. He, however, pioneered the politics of collective rights — of group entitlements. And his liberalism systematically developed policies not just to buy the allegiance of existing groups but to create groups that henceforth would be dependent on government. Under FDR, liberalism became the politics of creating an electoral majority from a mosaic of client groups. Labor unions got special legal standing, farmers got crop supports, business people got tariff protection and other subsidies, the elderly got pensions, and so on and on.

Government no longer existed to protect natural rights but to confer special rights on favored cohorts.

Perhaps we should all keep quiet while we go the way of Greece. Or perhaps it might be a good idea to listen to those who watch the cause and effect in the economy on a regular basis.