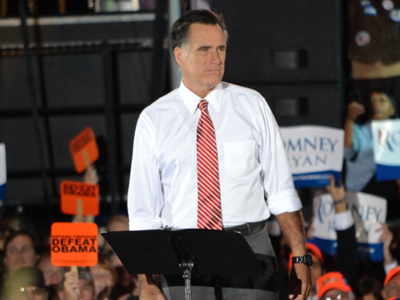 I got the following note from a California former university professor. I will intersperse her comments with my answers:

I am disturbed by your handling of some items in your recent newsletter and I wonder whether you can clarify them.

Using the word “disturbed” is an odd adjective for a tax computation. Were you really agitated or distressed by the article? Part of the problem is that Democrats have portrayed rich people like Romney as heartless devils. But the reality of their generosity and tax burden is hardly the example of greed that advocates of greater government would have us believe. I am much more disturbed by the portrayed distortion. I think Romney won the first debate simply when he showed up without horns and a tail.

In trying to produce a percentage of A divided by B it is important what constitutes A and B.

One difficulty with this measurement is that if you take $1 million out of your IRA and give it to charity this increases your adjusted gross income (B) without increasing (A) your federal tax owed.  It seems strange to me to fault someone for taking money out of their IRA and giving it to charity when comparing the tax burden shouldered by two different people.

A better measurement would be to take federal income taxes (A) and divide by taxable income [1040 line 43] (C). This allows deductions like charitable giving to be deducted first so that taking money out of your IRA and giving it to charity would not change the percentage paid in federal taxes. Using this calculation Romney paid $1,935,708 (A) on $9,007,709 in taxable income (C) or 21.5%.

An even better measurement is to add up all of the taxes the Romney’s paid. We do not require taxes to be paid on taxes paid. If we did, there would have been portions of the tax code where Americans would earn $100 and owe 60% on one tax and 60% on another tax. Since people can’t pay 120% of the income they have earned, the tax code allows one tax to take $60 and the second tax to only collect 60% of the $40 remaining or an additional $24. This makes the second tax ($24) seem exceedingly small. Why should the rich only be paying 24% while everyone else has to pay 60%? It looks small even though their cumulative marginal tax rate is 84%.

And this is what happens in a highly progressive tax system with highly productive people such as the Romney’s. They have already paid high taxes such that the amount taxed again at the federal level is a smaller percentage while their overall tax burden remains high. So I added back in these other taxes as well. This changes the taxes paid (A) to add in much of the deductions of taxes paid elsewhere. Rather than A divided by C it is A + other taxes divided by B.

But finally there are taxes that have been removed before they received their income on account of taxes paid at the corporate level. We’ve written before about the double taxation of dividends. And this is the calculation you are asking about.

If there were taxes paid before (B) and you wanted to add those back in you would have to add them into both the numerator and the denominator. If corporate taxes (T) were added back in the equation would be A+T divided by B+T, and that is what I meant. I am adding them into both the taxes paid (numerator) along with the revenue lost (denominator).

I was conceding that it would not be fair to just add them to the numerator because they were also income/productivity which was never reported at the personal tax return level.

The final calculation showed that “Romney’s Return Suggests He Paid 57.9% in Taxes and Gifts to Charity” and “Romney’s tax returns a stellar example of citizenship and generosity.”

2. Your handling of the $2.3 million gift to charity confuses me. Because they chose to give money to charity, you lumped it in with money paid in taxes?? It was voluntary, not a tax. Plus they did not give $2.3 million since they saved paying the tax on the amount they deducted which was, in effect, paid for by the government.

Really?? That deserves two question marks for its incredulity??

Imagine two citizens. The first slaves to create $1 million in productivity. Keeping just $50,000 to live, they give everything else to their favorite charity, Habitat for Humanity. The second person creates just $100,000 and keeps it all for themselves. Who do you think should pay more in tax?

It sounds like you favor punishing the generous person by taxing their charitable giving as though they had tried to keep is as income. Please, let me know how much you think they should be taxed having earned $1 million and given all but $50,000 to charity.

Just to be clear, had these two individuals been running for President the press would be reporting that the generous person has a tax rate of 0.7% and the stingy candidate paid a full 17.1%. This is because charitable giving add to (B) without changing (A).

Personally I think it is a mistake to value supporting the government (taxes) higher than supporting society (charitable giving). So I added giving and taxes together.

And as if to add even more moral weight, the Romneys purposefully left $1.8 million in donations off their 2011 tax return in order to voluntarily pay more taxes. With this factored in the Romney’s paid $12.6 million in taxes and gifts to charity, keeping just 32.4% of what they produced.

3. Your discussion of the $2.2 million in qualified dividends and $6.8 million in capital gains which were both taxed at 15% confused me. You justified taxing these at the low rate because the money was taxed at the corporation before it could be paid out in dividends. But doesn’t that only apply to the qualified dividends? Other capital gains such as an increase in the value of stock or other property sold is not related to the income of a corporation and has never been taxed as a corporate profit – or am I missing something? Do you really believe that someone sitting at a computer making money by buying and selling stock should pay a lower tax rate on their earnings than someone earning money by productive work including giving investment advice as you do – 15% versus 35%?

I’m glad that you realize it applies to qualified dividends. That will make it easier to explain.

The important thing to remember is that from a corporate standpoint it doesn’t matter if a company pays profits out in dividends or keeps them to grow the size of the company’s value. From an investment standpoint they are equivalent gains. Only if there is a difference in the tax treatment is one advantageous over the other.

Company A pays tax on the profit and then pays a $10/share dividend with the remaining money resulting in the double taxation of dividends.

Company B pays tax on the profit and then uses the remaining money to purchase a smaller company C resulting in the share price of Company B to rise by $10 per share.

In each case the company had to pay tax before using the money for something which is not simply expensed. Capital expenditures can be depreciated over the long term, but only because they require an expense to keep them up.

To turn your question around, do you really think 44.75% is not enough and we need to tax investment returns at a rate of 65.81%?

The worst part about this tax is that much of investment gains are just keeping up with inflation. As the government produces inflation if nominal returns are half inflation and the tax rate is at 50% investors can’t have a positive real return no matter how hard they try.

I worry that the emotions of class bigotry and the retoric of financial slurs all stems from a lack of understanding of the moral case for Free Enterprise. Free Enterprise safeguards lasting happiness, promotes real fairness, and does the most good for the most vulnerable.