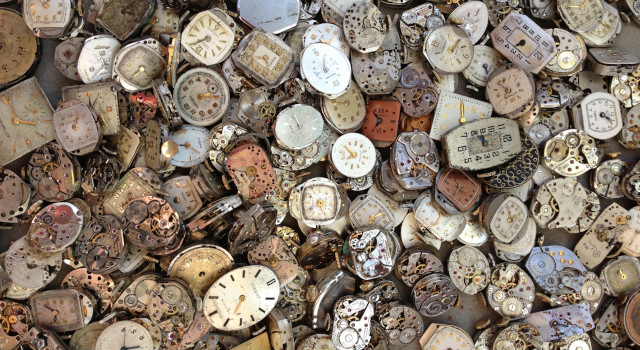 During the past two decades, the Securities and Exchange Commission (SEC) has changed its definition of “custody” several times causing me, as the Chief Compliance Officer (CCO) of Marotta Wealth Management, to disclose the exact same practices we have always done in a very different way.

We don’t actually have custody of any client assets. We use Charles Schwab as our custodian.

Back in 2009 when I wrote our “Safeguarding Your Money” series, Safeguard #1 was “Do Not Allow Your Advisor to Have Custody of Your Investments.” Nearly every Ponzi Scheme begins with an advisor who also has custody of client accounts. It is a crucial safeguard which should not be compromised. As I wrote in that original article:

Having a financial advisor who does not have custody of your assets gives you an extra layer of accountability and oversight. …

You can give your advisor limited power of attorney to makes trades on your behalf and take out a fee, but your custodian should both watch out for excessive fees and make withdrawals by your advisor impossible. Your advisor may be able to transfer money between your accounts but only between those you own completely.

In that article, we recommend avoiding an investment advisor who has custody of client assets such as a hedge fund or private equity group. Additionally, we recommend not allowing your advisor to pay bills on your behalf, as that would be the equivalent of having custody.

We still believe that allowing your investment advisor to have custody of your assets is a risk that you should not take.

Custodians, on the other hand, want to serve as an investor’s financial advisor. By blurring the line between your advisor and your custodian, they are able to recommend a host of different financial products and services, each of which might earn additional revenue for the custodian.

Custodians don’t like being the only ones subject to custodian rules and conflicts of interest. They have been pushing for Registered Investment Advisors (RIAs) to also have to answer “Yes” to having custody of client assets.

The first change pushed through was that if an RIA was able to submit a fee file to the custodian and have their fee automatically taken from the accounts, that would act as a form of custody.

There is an advantage to clients if we are able to deduct our advisory fees directly from client accounts. Taking a pro-rated portion of our management fee directly from a traditional IRA allows the client to pay that part of our fee with pre-tax dollars. This is effectively a discount on how much the after-tax cost that client has to pay for our fee.

The issue was pushed further and it was argued that if bill-pay is effectively custody, then any time an advisor can move money from one owner to a different set of owners that must be custody as well. Although this makes sense, they implemented by saying that moving assets from one account to a differently titled account is having custody. This means that when we have permission to assist a client fulfill their annual requirement minimum distribution (RMD) by moving money from their traditional IRA to the same client’s joint account with his or her spouse, we are deemed to “have custody” of that client’s assets. This is because while the advisor considers the husband and wife’s assets jointly, the SEC may views the husband and wife individually. With this individualistic view, the advisor is transferring money into the control of a third party (the spouse) when they transfer to the joint account.

These SEC ruling have raised many questions that they subsequently refused to answer, despite repeated inquiries.

Their response when asked for clarification is to answer, “We do not provide any guidance on compliance questions; you should consult your own compliance professionals.”

This answer is given despite the fact that until the SEC makes a determination of what is or is not in compliance, no compliance professional knows what is required to comply. Here is how we are completing this section of the SEC ADV Part 1 Item 9 Custody for 2020: 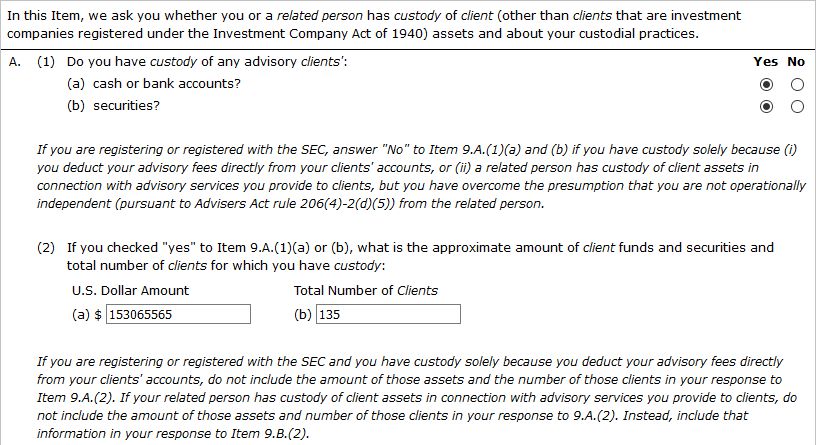 Having $153 million reported as having custody was a process.

In 2017, we reports that we did not have custody of any advisory client assets.

In 2018, we reported $209,978,564 in custody as a result of being able to make transfers between various accounts and 296 clients. That year we only had 227 clients, but we reported 296 clients with custody because we had 296 different accounts for which we had custody. We also reported $210 million in custody because we had the ability to transfer out of accounts which were valued in total at $210 million and we did not yet have a mechanism to determine which authorizations would be considered 1st party transfers and therefore not constitute custody according to the SEC.

In 2019, we reported $240,740,143 in custody as a result of being able to make transfers between various accounts and 502 clients. That year we only had 283 clients, but we reported 502 clients with custody because we had 502 different accounts for which we had custody. We also reported $241 million in custody because we had the ability to transfer out of accounts which were valued in total at $241 million and we did not yet have a mechanism to determine which authorizations would be considered 1st party transfers and therefore not constitute custody according to the SEC.

In 2019, we had no method of distinguishing between 3rd party SLOAs and 1st party SLOAs so we reported every SLOA as though it might trigger custody. Since 2019, Schwab has made a best-effort attempt to code our SLOAs as either 1st or 3rd party SLOAs. They try to be very careful not to give this information to advisors, though, because without SEC guidance, some RIA firms define these categories differently than others. We however, have exported Schwab’s coding and used it in 2020 to determine our answers to ADV Part 1 Item 9 Custody.

Another change to our compliance reporting in 2020 is a refinement of how we count our clients.

Internally within our own systems we count clients by household. If we have a husband and wife with unified goals they would be considered part of a single household. But if they have different goals or manage their money separately we separate them into two different households. Minor children may be managed within that household, but when they come of age or have different goals from their parents, they are given their own household even if their home address remains with their parents. If there is a trust with a set of goals which are different from the parents (perhaps because the beneficiaries are different), we may manage the trust as part of its own household. None of these are the SEC’s definition of how to count clients though.

In one section, the SEC explains their definition of how to count clients :

(i) Multiple Persons as a Single Client. Rule 202(a)(30)-1 provides that the following can be considered a single client:

We are now striving to count clients using this definition.

Elsewhere in (FAQ) regarding Form ADV Item 5.D, the SEC suggests that it doesn’t matter how you count clients:

Q: How should I count clients for purposes of Item 5.D? For example, should a family be counted as a single client or multiple clients? How should I count a family trust set up for that family? If I provide advisory services to an individual for her own account and also provide advice regarding her IRA account, should I treat them as one or two clients?

Obviously, different advisors counting their number of clients differently means that the data provided to SEC is relatively meaningless and not fit for any purposes where they might be tempted to use it.

Collecting data, however, is not free—not for us, not for the industry from which we collect it, and not for investors. Registrants that provide the data often incur very large direct costs to produce the data in the time frame and at the frequency we require. …

Because filling out the form requires each firm doing the reporting to make judgment calls about what data are responsive to each field, data collected from one fund may not actually correspond to the data collected from other funds, which makes it difficult (or misleading) to conduct cross-industry analyses of the data. There are also inconsistencies between what funds have to supply to the Commodity Futures Trading Commission and what they have to supply to the SEC. It is also unclear whether the data are fit for purpose.

In 2019, we reported more clients for whom we had custody of clients’ assets (502) than we reported having actual clients (283) on account of counting the first as individual accounts for which we had custody and the second according to the best guess of the method we use to count clients internally.

In 2020, we started attempting to consistently count clients according to what we believe is the SEC’s preferred method of counting clients, counting to families and trust beneficiaries “with the same principal residence” together. This method involved some very sophisticated structured query language (SQL) queries to accumulate the owner(s) of each account by their address identifier, grouping all people with the same principle residence and counting them aggregated together as a single client for each client count.

As a result of those changes, the number of clients (as counted by unique residences) where we have these third party transfer custody dropped in 2020 to 135 clients.

And since this information is supposed to be reported as of the end of the year it requires working to collect all of that data on January 1st, what is normally a firm holiday. By January 2nd, the data begins to change again producing numbers which will not match with other fields reported annually to the SEC.

Currently, the OMB estimates that it requires 23.77 hours for RIAs to comply with Form ADV Part 1 and 29.28 hours for ADV Part 2. This year, they have added a new requirement called ADV Part 3 Form CRS for which they have not yet assigned an estimated average burden, but on which we have already spent countless hours of compliance efforts reading SEC instructions, listening to online presentations, and reading compliance articles.

RIAs are also required to file a select list of assets they hold through the Electronic Data gathering, Analysis, and Retrieval (EDGAR) system which, according to the OMB, requires an additional 23.8 hours per quarterly filing.

Megan Russell, our programmer and Chief Operations Officer, and I spend hours each year trying to improve the accuracy of our SEC reporting. While important for SEC compliance, those hours bring no real value to consumers. Imagine how you would feel if some government agency asked you to spend over 150 hours a year (3.75 weeks) of forced labor during your vacation days as a government data entry clerk.

Our rule writers and examiners ask for a lot of data. The temptation to collect more data only grows with the sophistication of our analytical techniques and tools. … Once we start down the road of collecting data, it is hard to rein ourselves in. … We ought to think carefully about how much data is enough.

The SEC should scale back their data collection.

Photo by Heather Zabriskie on Unsplash