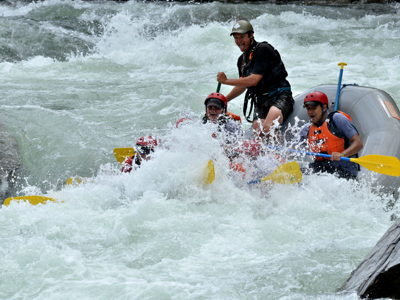 We recently went whitewater rafting on the American River in California. Our guide said their policy was “Safety second” because those who put safety first don’t go whitewater rafting. Also, no one says, “Oh, that looks safe; I wonder if it is fun,” although we often hear the reverse.

His motto was, “Fun first, safety second.” Not everyone has the same values. And not everyone chooses to go whitewater rafting.

Our guide delivered a speech on safety before we left. His main point was personal responsibility. The man who goes overboard is responsible for saving himself. Although everyone else will try to assist him, our raft guide would have to continue to steer the raft and assure the safety of the five people still inside. He could do little more than steer the boat while pointing and shouting instructions to the man overboard.

Every study about disaster relief suggests the most critical first responders are ordinary people taking responsibility for themselves and those around them.

Unfortunately, citizens often assume a safety first mentality and then expect big government to legislate safety by the force of law.

Many laws have this safety first mentality at their heart. Social Security, Obamacare, and Gun bans are among them. The goal of each of these is to protect us from ourselves and, as a result, often limit the free choice of citizens unnecessarily.

Some risky decisions are wise and most safety measures have a cost. But this safety first legislation is implemented in a one-size-fits-all rigidity that harms a significant portion of the population. Even the sale of raw milk is banned despite its health benefits because of this safety first mentality.

Not only is legislating safety debatably effective, but safety should be put behind more important values.

While we were in California, we visited the San Francisco Zoo. Zoo theory has advanced a great deal in the past few decades. The animals confined to zoos historically had health problems and short lifespans. Healthy animals require a certain level of stress and physical stimulation. Providing all of the essentials of life without any work on the part of the animals results in chronic obesity, atrophied muscles and illness.

To combat those issues, zookeepers encourage the animals under their care to work for their food. We watched brown bear fishing for carp, poison frogs hunting aphids and even donkeys rolling a ball to access their feed.

Zoos take away the claw and tooth of the wild, but it is best if they do not remove the stress and competition. Complacent animals might be safe, but they are not healthy. The zoo never forced an animal to do something it did not want to do. But there were rewards for working. A zoo motto might easily be “Health first, safety second.”

In politics, the motto ought to be “Freedom first, safety second.” Freedom, like health, produces safety. When we are free, we are safe from violations of our natural rights. We are free to live without unlawful intervention.

The Patriot Act and the creation of the Transportation Security Administration was an abrogation of freedoms in the name of protection. But you can’t defend our freedoms by trampling on them. As Benjamin Franklin wrote, “They who can give up essential liberty to obtain a little temporary safety, deserve neither liberty nor safety.”

Even in entrepreneurship, safety is second. Businesses must take risks to innovate, adapt and compete. They need to push themselves continually to do things better, faster and smarter. None of those challenges are without risks.

Any successful entrepreneur knows you can only keep doing things the safe way for a while before someone else makes you obsolete. Their motto must be “Innovation first, safety second.”

In investment management, return follows risk, not safety. A sure thing does not exist, which is why we always advise people to walk away from scenarios that are “too good to be true.”

If you put safety first, you would put all of your money in FDIC-insured CDs paying very little. Your money would be safe, if by safe you mean the dollar amount would not go down. The purchasing power, however, would continually dwindle as inflation ate away at your so-called safe investment.

An attitude of “safety first” results in putting all of your other financial goals second. This is not an investment strategy. A favorite Paul Volker quote is “You can’t hedge the world,” to which we would add, “and if you could, it would cost too much.”

Fun first. Freedom first. Innovation first. Financial goals first. But not safety. A sure thing does not exist. Our world is inherently filled with risks and dangers. Safety should come second.