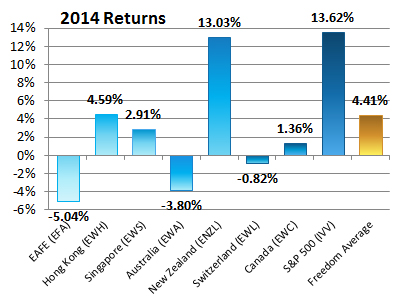 As a result, using the net returns of iShares MSCI funds in U.S. dollars, an equal allocation of the Free Six (EWH, EWS, EWA, ENZL, EWL, EWC) beat the return of the EAFE fund (EFA) by 7.92% over 2014. (If you add in the return of the United States as a seventh mostly-free country, then they beat the EAFE by 9.45%.)

MSCI country indices are calculated in a country’s local currency as well as translating that currency back into U.S. dollars. This year that conversion hurt foreign stocks as the U.S. dollar appreciated against most currencies.

Although the EAFE Net Index lost 4.90% when measured in U.S. dollars, it gained 5.67% when measured in local currency. The 10.57% difference between the returns was a result of currency exchange. During 2014, the euro and the yen dropped 12.09% and 12.10%, respectively, against the dollar. Currencies of the Free Six held their value better than the Euro and the Yen.

With everything measured in local currencies, the average return of the Free Six was 10.44%, outperforming the EAFE Index’s local return by 4.77%.

Even in a year when Foreign stocks as a whole have a negative return, investing in countries with the most economic freedom still boosts returns.