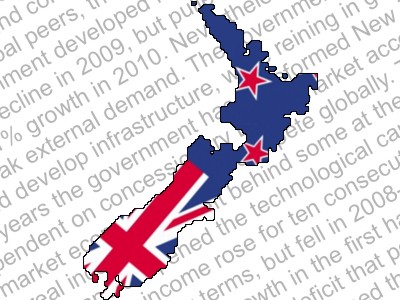 In Freedom Investing 2012 I analyzed the latest Index of Economic Freedom from The Heritage Foundation. Here I present some of the analysis for New Zealand, the fourth highest country in economic freedom.

We use iShares country specific ETFs  for investing in countries with the most economic freedom for reasonable fees. IShares added the MSCI New Zealand Investable Market Index Fund (ENZL) in September, 2010. Last year New Zealand was one of the few positive returns of 2011. 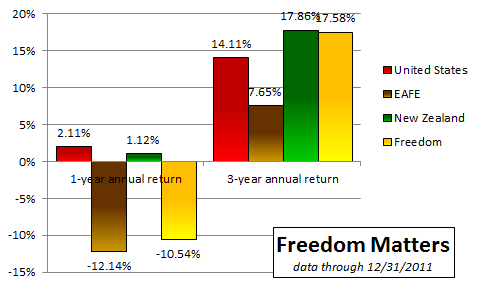 Nearly every world traveler counts New Zealand among the most beautiful places on earth. According the Heritage Foundation’s Freedom Index it is an economic paradise as well. Public Debt is only 32.0% of GDP and the corporate tax rate was cut from 30 percent to 28. Here is how New Zealand compares in the ten measurements of economic freedoms: 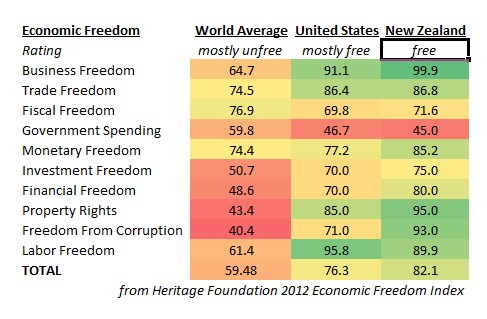 IShares MSCI New Zealand Investable Market Index Fund (ENZL) has a relatively low expense ratio of 0.51%. There are only a couple of dozen stocks among the holdings in the fund, and New Zealand is a small fraction of the world index. As a result, over weighting New Zealand does not require as large an allocation as other countries. On the positive side, investing in New Zealand gives you a great excuse to visit your investments.

Disclosures: Our firm has been over weighting countries with the most economic freedom for several years, including ENZL. New subscribers to our blog receive free access to a 1.75 hour video presentation on “Where in the World to Invest?“