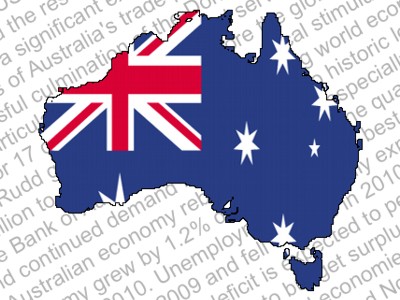 Since 1994, the Heritage Foundation Index of Economic Freedom has used a systematic empirical measurement of economic freedom to evaluate countries worldwide. Their conclusions clearly show that economic freedom and higher rates of long-term economic growth go together. Investors can use the study to select countries for their foreign stock allocation.

A country’s economic freedom score is based on 50 measurements. They fall under these 10 categories: trade policy, fiscal burden of government, government intervention in the economy, monetary policy, capital flows and foreign investment, banking and finance, wages and prices, property rights, regulation, and informal market activity.

Australia ranks as the third freest among 183 countries in the 2011 Index of Freedom. 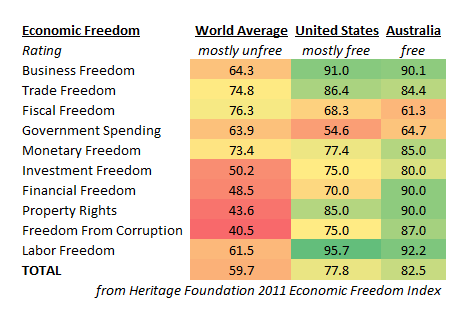 The U.S. corporate tax rate at 35% is currently the second highest rate in the world. In two years when the Bush tax cuts expire, it will rise to 39.5% and be at that time the most punitive tax rate in our global economy.

At that time, businesses in Australia’s 30% environment can return 9.5% more profits to shareholders and investors and still remain competitive with U.S. companies. In our global economy a 9.5% competitive advantage provides much more fertile soil for investments. And that is Australia’s worst category of economic freedom.

Australia’s best category is Financial Freedom where it ranks first in the world. The latest Heritage report praises that in Australia, “All banks are privately owned. Government regulation is minimal, and foreign banks, licensed as branches or subsidiaries, offer a full range of services. … Regulation is focused on capital adequacy, solvency, and prudential behavior.”

Contrast that with what the Heritage report has to say about the United States, “A number of prominent financial firms or banks failed or were bailed out, and the government has intruded on firms’ management in unprecedented ways. The damage caused by mortgage guarantors Fannie Mae and Freddie Mac remains largely unabated. Concerns continue over the intrusive nature and cost of the 2002 Sarbanes–Oxley Act, which increased disclosure and internal control requirements to the detriment of smaller firms. The impact of a sweeping overhaul of financial regulations passed in July 2010 is yet to be measured, though it appears to do little to reduce the chances of future government bailouts.”

Sarbanes-Oxley, put into place after the Enron meltdown, costs about three Enrons every year in compliance costs. These onerous regulations have driven American IPOs onto London’s AIM exchange. They have also made it so that foreign banks refuse to allow citizens in the United States to become clients simply to avoid having to abide by such a business killing regulatory environment.

Now the Dodd-Frank bill of 2010 has added additional rocks to the American financial services soil. Why would a bank submit to our Financial Stability Oversight Council? The ten regulators in this group have the task of monitoring any system-wide risks in our financial system. They have also been given nearly unlimited power to address these risks by forcing financial firms to sell assets or close a portion of their business.

Odd that all of our focus on regulations actually left our financial system vulnerable to the politics of pushing loans to those who should not receive them such that we destabilized our own financial markets. Australia, with less regulation and therefore more business freedom, provided a more stable environment.

Again, from the Heritage report, “From the early 1980s until 2007, successive Labor and Liberal governments deregulated financial and labor markets and reduced trade barriers.”

All that freedom has produced economic expansion. 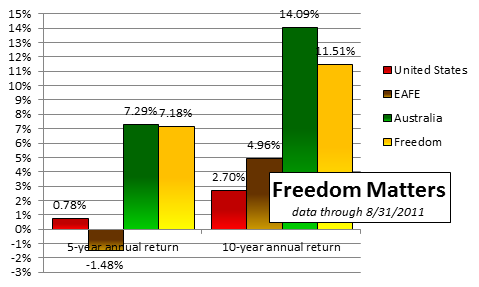 Australia is not alone in its economic freedom, but it is in an elite group. There are only a handful of countries with high economic freedom. We’ve been writing about these countries for years now and analyzing their returns annually against their more restrictive neighbors. Freedom matters. Over the past decade these economically responsible countries have had an average return of 11.51% while the EAFE index has averaged 4.96% and the S&P 500 only 2.70%.

One of the Heritage Studies explains why the freedoms they track are so important: “All government action involves coercion. Some minimal coercion is necessary for the citizens of a community or nation to defend themselves, promote the evolution of civil society, and enjoy the fruits of their labor. This Lockean idea was embodied in the U.S. Constitution. For example, citizens are taxed to provide revenue for the protection of person and property as well as for a common defense. Most political theorists also accept that certain goods–what economists call “public goods”–can be supplied most conveniently by government.

“When government coercion rises beyond that minimal level, however, it risks trampling on freedom. When it starts interfering in the market beyond the protection of person and property, it risks undermining economic freedom. Exactly where that line is crossed is open to reasoned debate. The goal in the scoring of economic freedom is not to define these extremes–either anarchy or utopia–but to describe the world’s economies as they are.”

China and Japan are Australia’s biggest trading partners. Rich in natural resources, investing in Australia is an investment in the growth of China without worrying about the government of China. The MSCI Australia Index is 30.2% materials stocks and 6.7% energy stocks. These include BHP Billiton, Rio Tinto, Newcrest Mining and Woodside Petroleum.

In addition to EWA, another easy way to invest in Australia is iShares MSCI Pacific ex-Japan Index Exchange Traded Fund (EPP). EPP has about 150 stocks primarily from three different countries. It is 64% Australia, 20% Hong Kong, and 14% Singapore. All three of these countries are among the freest countries in the Heritage report. The expense ratio for this fund is even lower at 0.50%. Investing in EPP is an easy way to gain exposure to all three countries.

We believe that this is one of the times when your asset allocation should tilt foreign and overweight the handful of countries with high economic freedom. While many economists acknowledge that freedom matters, few investment strategies take advantage of this fact.

To learn more about freedom investing visit our website at http://www.marottaonmoney.com/freedom-investing