Here’s how the 6 asset classes performed during 2014: 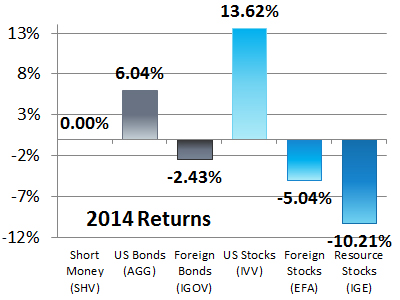 In order to have a balanced portfolio, you need a collection of assets whose returns are not correlated.

Vanguard Energy (VGELX), was down -14.22% for the year as the price of oil dropped below $50 per barrel. It didn’t matter if they were U.S. energy companies or based in a foreign country, they were all affected by the global price of oil.

Foreign stocks as represented by iShares MSCI EAFE (EFA) was down -5.04% when measured in U.S. dollars, but the net index was up 5.67% when measured in their local currencies. The difference between the returns was a result of currency exchange. During 2014, the euro and the yen dropped 12.09% and 12.10%, respectively, against the dollar.

Over 2014, the dollar strengthened an average of 12.79% according to the U.S. Dollar Index. Most of that strengthening happened in the second half of the year.

A strengthening dollar contributed to the losses in three indexes which were down. Foreign bonds are denominated in foreign currencies, many of which lost value in the exchange over the past year. Foreign stocks had a gain in their local currencies but a loss when translated back into dollars. And the strengthening dollar caused the price of many resources to drop such that the companies that produce them made less profit.

This year’s returns have left some investors wanting to put more into U.S. stocks because they are “going up.” The phrase “going up” (present tense) makes it sound like they are part of an ongoing process in the present rather than simply the aggregate of hundreds of days of going up and down with more up than down days in recent sampling. In truth we should say: “U.S. stocks are up” or  “U.S. stocks have gone up.” Studies suggest that there is no momentum to the stock market and not only does past performance not predict future performance, it isn’t even slightly correlated to future performance.

We don’t want to let recency bias cause us to miss the boost that comes from rebalancing. Rebalancing would suggest that selling some of the profits from U.S. stocks (which did the best) and buying energy (which did the worst) is the contrarian move which has the best chance of increasing performance. Rebalancing might boost returns by as much as 1.6%. We don’t want to miss the 1.6% rebalancing bonus we can receiving because we are chasing the 13.62% that we wish we’d received on the entire portfolio.