Each quarter brings a different set of returns for each asset class and subcategory. And the bonus for rebalancing is a product of low correlation between categories and high volatility. The rebalancing bonus is one case where volatility is a friend to diversification and can help boost returns for those who are regularly rebalancing.

But perhaps the best return was from Japan as iShares Japan (EWJ) appreciated 10.20% during the first quarter. At the end of 2014, EWJ’s 10-year average annualized return was only 1.76%. Despite Japan’s stellar performance for one quarter, we don’t recommend overweighting Japan going forward. Japan currently ranks 20th in economic freedom in the middle of the “mostly free” category. This is an improvement, but Japan’s debt, deficit, and high corporate tax rate do not make it an attractive place to invest at present. 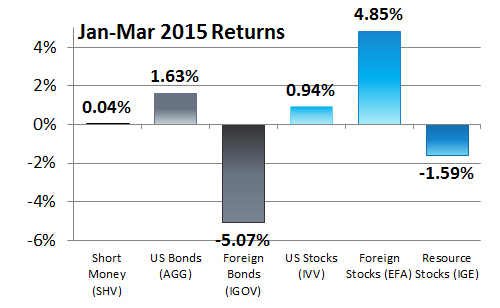 Foreign Bonds, as represented by iShares International Treasury Bond (IGOV), lost 5.07%. Some of the foreign bond funds we recommend performed much better against this measurement as can be seen here: 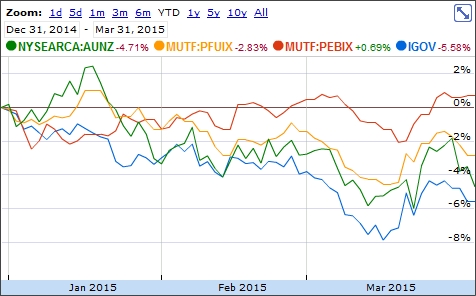 As the dollar has become more volatile, swings in the value of a dollar have made foreign bonds more volatile as measured in US dollars. It is interesting to me that emerging market bonds (e.g. PEBIX) have held their value better than the index which contains more of the countries high in debt and deficit.

Asset allocation means always having something to complain about. But it also means always having a decent return which can compound on last quarter’s decent return. Over time we think that is a strategy which gives you the best chance of meeting your goals. We’d rather come in the top twelve among the down hill skiers in the Olympics than try for gold and risk breaking every bone in our body. As a result we have a saying: “It is always a good time to have a balanced portfolio.” And another saying: “Don’t let the latest short-term returns ruin a brilliant long-term investment strategy.”

As always, both the authors and the clients we manage often invest in the investments mentioned in these articles.