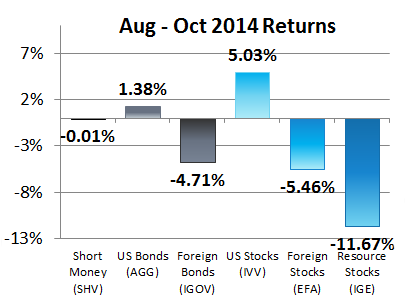 Here are the months of August through October, 2014 for six iShares products that represent our six asset classes.

During this three months, the dollar continued to strengthen in the global economy against the Euro and the Yen. This pushed foreign stocks and bonds lower, although emerging markets have held up slightly better.

The United States did well during this three months and the difference between US stocks and Foreign Stocks (10.49%) turned the tables on the early portions of the year where US stocks had not performed as well.

Resource stocks have been pulled down with the low price of energy. But real estate (both domestic and to a lesser extent foreign) have done better.