In “Using Dynamic Asset Allocation to Boost Returns” I wrote:

Here is the chart showing R2000 P/E divided by R1000 P/E (projected) on the X-axis against the difference in next month’s large minus small returns on the Y-axis. As you can see, although the scatter plot is all over the place, the trend is that when large is relatively cheap, large out performs and when small is cheap it outperforms. 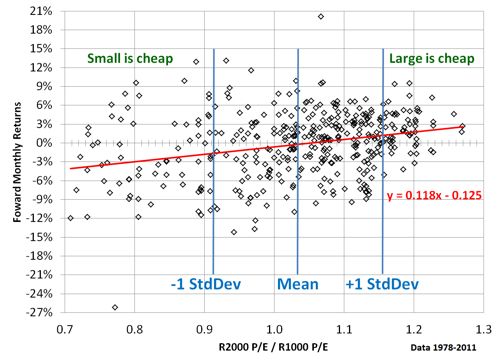 Currently large is relatively cheap and small cap is relatively expensive. For that reason, the R1000 or S&P 500 should outperform the R2000 small cap.