A static asset allocation, not the same as a buy-and-hold strategy, already has a dynamic component. Buy and hold sets an asset allocation and then allows the portfolio to drift. The portfolio generally moves in a more aggressive direction, increasingly overweighting whatever has done well. It’s certainly a better strategy than jumping out of the markets after a drop and waiting to jump back in after a rally. But it isn’t the optimum strategy.

Asset allocation is a buy-and-rebalance strategy. Portfolio rebalancing boosts returns. And thanks to a rebalancing bonus, this strategy produces portfolios with either higher returns or lower volatility. By looking at the mean return and standard deviation of an asset class, you can gauge its distance from the efficient frontier. The correlation of an asset class to other asset categories determines the optimum ratios of those two indexes in your portfolio.

We used a ratio of excess return to standard deviation called the Sharpe ratio to measure the efficiency of each asset category. Then we used a proportionally weighted allocation based on the square of each Sharpe ratio to create a portfolio asset allocation. I humbly call this the Marotta allocation method.

Last week we looked at the Shiller price-to-earnings (P/E) ratio. We took the current price and divided by the average inflation-adjusted earnings from the previous 10 years. This measurement is also known as the cyclically adjusted P/E ratio, or the Cape ratio, abbreviated as P/E 10.

The Shiller P/E ratio helps determine the expected forward-looking return of an investment or index, not if you should be in or out of the markets. Another measurement is the forward-looking P/E ratio. It uses projected earnings for the next 12 months.

Let’s look at four concrete examples for the U.S. stock allocation of our gone-fishing portfolio. Our first two examples represent the extreme indexes of large-cap and small-cap value. First we put everything in the S&P 500. Then we put everything in the Russell 2000 Value. Our third asset allocation is a static one with two thirds in the S&P 500 and one third in the Russell 2000 Value. Normally an allocation that tilts toward small and value will have higher returns. 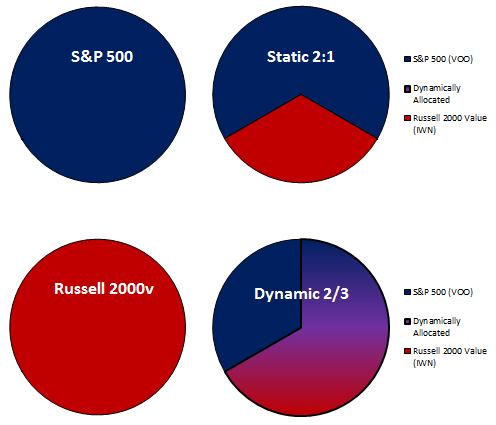 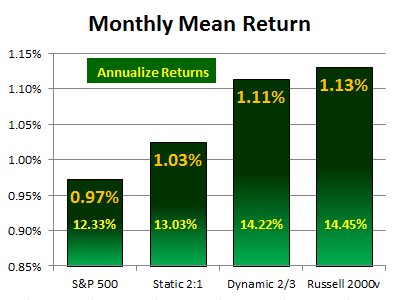 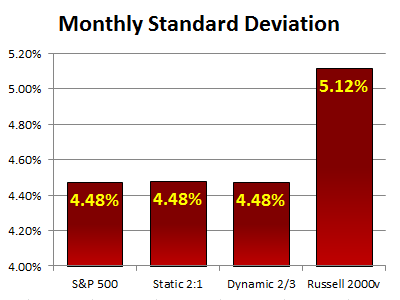 Boosting annualized returns by static and then dynamic asset allocation 1.89% without adding monthly standard deviation, you can reap the benefit of careful portfolio construction and dynamic changes based on the ratio of projected P/E ratios. 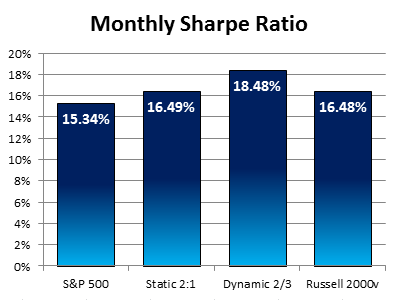 We’ve been using the U.S. stock portion of our portfolio to illustrate how static portfolio construction using the Marotta allocation method gives us a starting target. Then a ratio of projected P/E ratios can be added to offer a dynamic component and boost returns even more. In our typical portfolios, the percentage allocated to a U.S. style box is usually less than a quarter of the total portfolio. But this same methodology can be used with any noncorrelated asset categories to provide a dynamic allocation model.