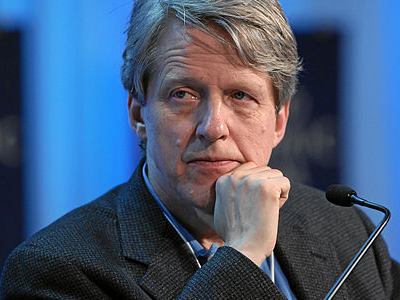 A common measurement given on financial sites for a stock, index or fund is the price-to-earnings ratio, or P/E ratio.

The P/E ratio is the market price per share divided by the annual earnings per share. For example, if a stock is trading at $15 per share and the company has earnings of $1 per share, the stock would have a P/E ratio of 15. If you bought a share for $15, during the next 15 years you would get your money back in earnings and still own the share of stock.

Although the P/E ratio of the S&P 500 varies widely over time, it averages about 15. Getting $1 for every $15 you have invested equals a return of around 6.67%. This is about the average return over inflation of the stock market.

Your investment appreciates in two ways. First, the value of the company appreciates by inflation, which generally has averaged about 4.5%. Second, the company has earnings that bring an additional 6.7% return. Sometimes a portion of these earnings is paid out in dividends. Other times the earnings are reinvested to grow the value of the company by opening more stores or buying other companies. Regardless of how the earnings are used, the total return in dollars is around 11.2%, about 6.7% over inflation.

Although both the P and E are defined in “per share” terms, the ratio is often calculated for the company as a whole. Total capitalization is price times the number of outstanding shares. And total earnings is earnings per share times the number of shares. Hence the P/E ratio is the total capitalization of the company divided by its total earnings.

Several different numbers can be called the P/E ratio. For example, the trailing P/E uses the earnings for the most recent 12 months. This is the most common measurement, often abbreviated P/E ttm, which stands for “trailing twelve months.”

An alternative measurement excludes some of the onetime accounting measurements such as large write-offs that can cause a reduction in net earnings. But sometimes these write-offs should be factored into a company’s profitability.

For companies with accelerating earnings growth, investors are willing to pay a high P/E ratio for the stock because they expect the earnings E to be higher in the future. As a result, another P/E measurement uses forward-looking earnings or estimated earnings based on the consensus of analyst-projected earnings over the next 12 months. But analysts are often wildly more optimistic than justified by subsequent operations.

At its core, all investing is paying for an earnings stream. When U.S. treasuries are paying high interest rates, people are not as willing to put money at risk in the markets for an equivalent return. At this point P/E ratios fall until stocks are attractive enough in their expected return. And when interest rates of treasuries are extremely low, P/E ratios can rise because there is no other investment offering an attractive expected return.

There are problems using any of these P/E measurements. Sometimes during recessions a company’s earnings can be zero or negative over several quarters. When the trailing 12 months of earnings approaches zero, the P/E ttm approaches infinity. This divide-by-zero error often happens when the stock is about to recover.

A high P/E ratio is normally a sign that P price has become higher than it should. But using trailing 12 months of earnings masks movements in price within the divide-by-zero error. Investors are smart enough to know that zero earnings accompanied by a modest drop in price makes the stock attractive to buy on the assumption that earnings will recover. A P/E ttm measurement, however, will still look terrible.

The difficulty with the common ways of measuring P/E ratios is that we want to measure past earnings even when earnings virtually disappear for a few quarters. What we would really like to measure are the changes in price P that cause a company with a good long-term track record to look relatively cheap. Economist Robert Shiller created just such a measurement.

The Shiller P/E ratio is computed by taking the current price and dividing by the average inflation-adjusted earnings from the previous 10 years. This measurement is also known as the cyclically adjusted PE ratio (CAPE ratio), or P/E 10.

Using 10 years of earnings allows movements in price to play their important role in market cycles. After price has fallen but before earnings have recovered is the best time to invest. The ttm P/E ratio will still look bad, but the P/E 10 will be signaling a buy. Similarly, when the markets are doing well and the last year of earnings make it look like P/E ttm ratios are attractive, the P/E 10 will be signaling you to consider trimming stocks that now look expensive.

In his book “Irrational Exuberance,” Shiller shows that P/E 10 is correlated to the subsequent 20-year annualized return after inflation. A low P/E bodes well for the next 20 years of investing, whereas a higher P/E 10 suggests a lower expected return. 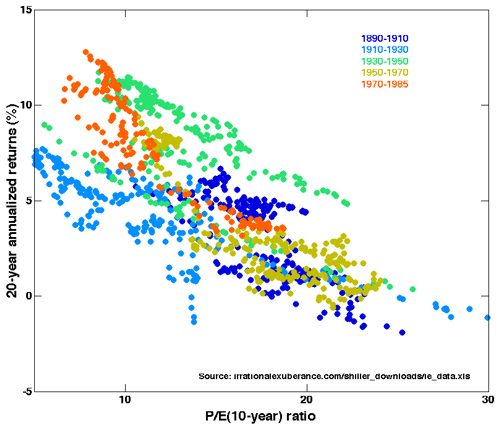 The P/E 10 can suggest the proximity of specific indexes or investments to the forward-looking efficient frontier. If P/E 10 is relatively low for an index or investment, it suggests it is closer to the efficient frontier and overweighting it may boost returns going forward. But if P/E is at historical highs, underweighting or lightening up on that particular index investment may lower volatility or downside risk. You can also use the relative ratio between two P/E 10 ratios to suggest that one asset class may be overvalued while another may be inexpensive.

The movements suggested by this approach are small and gradual. This is a much different approach than stock picking or market timing. Indexing is based on the idea that fees matter, whereas this strategy is based on the idea that price matters. And when price gets ahead of what is justified by the past 10 years of inflation-adjusted earnings, then perhaps the exuberance is excessive.