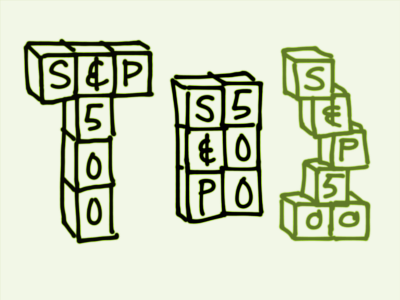 As the case for low-cost investing wins more converts than a Billy Graham crusade, new varieties of index funds are being added to supply a growing investor appetite. Rather than deciding between active or passive investing, the debate now rages about what type of index fund is best.

The most common way to design an index fund is based on capitalization. The S&P 500 index is structured this way, which means each company in the index is owned in proportion to its capital footprint. At this writing, Exxon Mobil Corp. stands at the top with 2.81% of total capitalization, Apple stands at 2.67%, and Microsoft Corp. is at 1.77%. Many find capitalization-weighted indexes, or “cap-weighted indexes,” to be best because they represent the consensus investor estimate of each company’s relative value at every moment.

However, this cap-weighted strategy has significantly underperformed a newer equal weight strategy. The Guggenheim S&P 500 Equal Weight exchange-traded fund (ETF) (RSP) returned 25.79% during the last 12 months ending June 30, which is 5.28% better than the SPDR S&P 500 ETF (SPY) that uses the cap-weighting method. This equal-weight strategy uses the same companies, but it is different from the traditional index because it holds them all in equal proportion.

The appeal of the equal-weight index is that it avoids having a fund dominated by a small group of very large stocks. The top ten holdings of the standard S&P 500 index total 18.25% compared to a target of 2.00% for the Guggenheim S&P 500 Equal Weight ETF (RSP). Only in an equal-weight portfolio will you find proportional holdings of AutoNation, Inc. (AN) and Exxon Mobil Corp’s (XOM). AN is only 1.34% the size of Exxon’s $415 billion market cap.

Is it any wonder that a fund targeting a higher allocation to smaller companies that have larger stock price swings will outperform? Modern portfolio theory has long suggested that investments with higher expected volatility should expect higher returns. Research by Joel Dickson, a senior investment strategist at Vanguard, suggests the Guggenheim S&P 500 Equal Weight ETF (RSP) has a stronger correlation over the last 10 years to a mid-cap index fund than it does to the S&P 500. 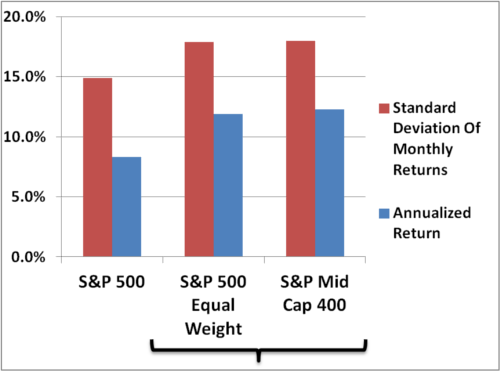 If the profile of the Guggenheim S&P 500 Equal Weight ETF (RSP) essentially mirrors a mid-cap index, investors are better served to buy the Vanguard Mid-Cap ETF (VO) that carries a 0.10% expense ratio rather than an administrative burden of 0.40% for RSP.

So-called fundamental weightings are another popular tool used to design indices. The WisdomTree Earnings 500 Fund (EPS) weights the largest companies by their reported earnings. This strategy is appealing because it reduces the overall price-to-earnings (P/E) ratios of the fund by underweighting those companies that have been bid up by the market before their earnings have been proven.

However, critics suggest that comparing this fundamental strategy to a cap-weighted strategy is like comparing apples and oranges. The WisdomTree Earnings 500 Fund leans toward a value fund strategy by reducing the allocation to growth (high P/E) stocks.

Any student of the Eugene Fama and Kenneth French multifactor model of investment returns would expect a fund that leans toward value to outperform over the long term. Most credit this outperformance to the additional discount factor that investors apply to financially strained companies that are part of the so-called value camp.

Recent history helps illustrate this point. Over the last 12 months ending in June 2013, large cap value funds as measured by the Russell 1000 Value index increased 8.25% more than the growth index, which is nearly twice the average historical value premium.

But from 1990 to 2012, large cap value underperformed growth in 42% of the five-year rolling periods. You can’t always expect value to outperform, and there are more effective strategies to handle growth stocks than permanently reducing allocations to this style.

The Marotta Wealth Management Investment Policy Committee uses a dynamic allocation strategy that shifts between growth and value using forward P/E ratios. We have found that the periods when expectations are low for growth stocks are typically when growth outperforms value. We increase our allocation to growth stocks during these periods of relative undervaluation and revert back to a value-leaning portfolio at all other times.

We are also evaluating a strategy rolled out by Dimensional Fund Advisors (DFA) that suggests highly profitable growth companies can outperform a standard growth index. DFA research suggests that by adding this profitability dimension to index creation, growth funds can again become advantageous.

However, if value is what you want, our friends at Vanguard can again offer the lower priced option. Both the Vanguard Value ETF (VTV), a large cap value fund, and the Vanguard Mid-Cap Value ETF (VOE) are available for 0.10% and can be blended with the Vanguard S&P 500 ETF (VOO) at 0.05% to achieve a value-leaning large cap fund. The WisdomTree Earnings 500 Fund costs 0.28%.