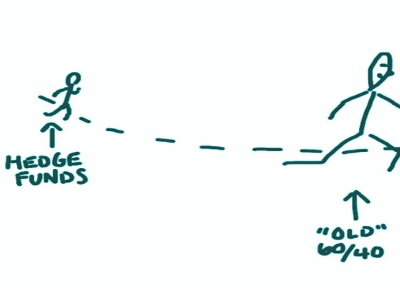 In another edition of “you can make the numbers say whatever you want” two financial industry studies are contradicting each other.

A conflicting study was commissioned by KPMG, a multi-national tax and audit firm and AIMA, the trade group representing hedge funds. Their study was titled (with no hint towards reserving hubris) The Value of the Hedge Fund Industry to Investors, Markets and the Broader Economy.

I am sure that it will not surprise you to hear that this study found “powerful proof of hedge funds’ ability to generate stronger returns than equities, bonds and commodities.”

You can see when comparing these two studies that choosing your starting date has a huge impact on results. Hedge Funds appear to have fared better during the 2000 – 2007 period. However, Bloomberg recently criticized the AIMA commissioned study for equally weighting the hedge funds which does not represent the average investors experience who were more heavily invested in the larger funds.  If these same assumptions were made for the equities, small companies would be overemphasized relative to larger companies which would have given a huge boost to the global stock performance because smaller funds historically outperform large.

Bloomberg performed their own study to compare hedge funds versus plain vanilla stocks and bonds using their vast financial database.

The main Bloomberg hedge fund index, which is weighted by market capitalization and tracks 2,697 funds, fell 2.2 percent a year in the five years ended June 30. The Vanguard Balanced Index Fund (VBINX), which has a 60/40 split of equities and bonds, gained 3.5 percent annually and the S&P 500 Index gained 0.2 percent a year.

The Vanguard fund also beat the HFRX Global Hedge Fund Index, a measure of hedge fund performance with a longer history, every year since 2003.

The Bloomberg report goes on to suggest that many of the nation’s largest pension funds are beginning to question whether they would be better off avoiding hedge funds all together.  The data certainly makes you wonder how many of these average or underperforming hedge fund managers are still hawking old 2 and 20 percent fee structures with a straight face.

In case you missed it, Warren Buffet has decided to jump into the debate by putting some money on the line.

What can not be emphasized enough to the prudent investor is that COSTS MATTER. A robust globally diversified portfolio can be designed with funds on average less than .5 percent. Investors should avoid funds that have fees charging over 1 percent. There will always be outperforming hedge funds but no more common than outperforming stocks. The average hedge fund turns out to be just average before their outrageous fees and expenses and trailing behind in performance when added in.