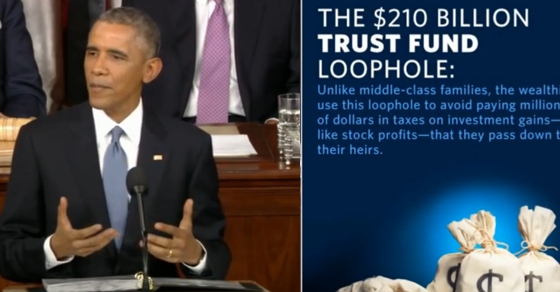 On January 23, 2015, YouTube produced a newsletter, “The Obama family takes on YouTube.” In it, they assert, “Let’s face it: the first ‘social media president’ is no stranger to connecting to the country via YouTube. Immerse yourself in a few of his greatest (and most entertaining) hits.”

President Obama’s prolific use of social media allows him to set the agenda and frame the debate. Those who are loudest in the media tend to drown out their competitors regardless of whose reasoning is better.

Consider just one paragraph and the accompanying slides from the 2015 State of the Union address.

Halfway through, President Obama boldly proclaimed, “Let’s close the loopholes that lead to inequality by allowing the top 1% to avoid paying taxes on their accumulated wealth. We can use that money to help more families pay for child care and send their kids to college. We need a tax code that truly helps working Americans trying to get a leg up in the new economy and we can achieve that together. We can achieve it together.”

The slide (Did Obama write it?) says, “The $210 Billion Trust Fund Loophole: Unlike middle-class families, the wealthiest use this tax loophole to avoid paying millions of dollars in taxes on investment gains–like stock profits–that they pass down to their heirs.” At the bottom, the slide proudly declares, “#MiddleClassTaxCuts.”

Policy analysts have interpreted this “trust fund loophole” to mean that Obama has his crosshairs set on inherited investments. But no one believes such legislation will pass. In fact, influencing Congress to pass new legislation is not Obama’s intent here. Instead, he is trying to divide the country, both with his quote and with his slides.

In his speech, Obama separates the country into two groups: “we” and “the top 1%.” He claims that “we,” presumably him and I, have lofty goals of helping people, goals “we can achieve together.” Meanwhile them, the other, the enemy, “the top 1%” he says are opposed to these plans.

These adversaries are able to “avoid” taxes, never mind that they do not legally owe them. The fact they don’t owe them is a so-called loophole, implying the intent of the law was for them to owe this tax.

The tax, according to Obama, should be on the enemy’s “accumulated wealth.” Of course the phrase “accumulated wealth” is chosen, as though money just drifts into their bank accounts without intention or effort. Words like “savings” or “earnings,” although equally accurate, might leave listeners with the impression that the enemy deserves to keep some of it.

Class warfare like this preys on the stereotype of ostentatious consumption while actually targeting people who live well below their means. It subverts the reward of success and prudence.

A 5-year-old girl with a piggy bank and no debt has a higher net worth than 80% of medical school graduates , 15% of U.S. households (46 million people) and the bottom 30% of the world combined . And that’s just because she has a few pennies to her name.

That’s why closing “the loopholes that lead to inequality,” even in Obama’s speech, takes the form of confiscating savings. Because there are always people with a net worth of zero, the only way to solve inequality is to attack the financially responsible.

In his slides, Obama alludes to the stereotypical “trust fund kid” by titling it “Trust Fund Loophole,” even though, according to Janet Novack at Forbes , “the loophole Obama is aiming at has nothing to do with trusts.”

He uses this “trust fund” language to imply a separation between “the top 1%” and the ownership over these assets that is due to them. Inheritance or any other generosity of parents with their kids, almost uniquely, has the ability to anger everyone. Most people just hate heirs.

So after robbing these people of their savings, earnings or inheritance, Obama says that “We”–the bank-robbing government–“can use that money”–the careful savings of someone else–“to help more families”–who also didn’t earn this money.

Regardless of how he plans on implementing this scheme, his intention is redistribution at its wickedest.

We need a tax code that doesn’t confiscate our production and spend it on deadweight loss.

Obama seems to believe that inequality of accumulated wealth is morally wrong while the forceful redistribution of unequal wealth is morally right. That is one of the primary tenets of socialism. Unfortunately, it is currently hip and cool among a large portion of the younger electorate.

However, the president’s war on production and thrift is evil. The forced redistribution of wealth has no moral value. Being generous with other people’s money is larceny, no matter how good the intentions.

The White House slide show version of the State of the Union only amplifies this socialistic attitude. The American people should not tolerate this demagoguery. Class warfare will not help anyone.