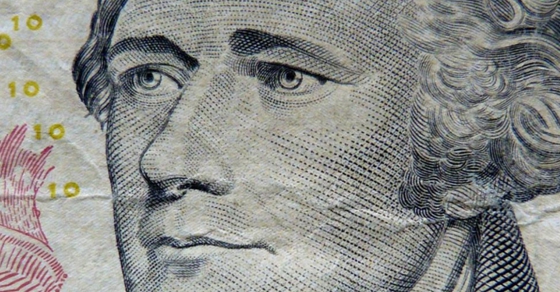 President Obama is reportedly “very interested” in raising taxes through executive action. Apparently, both he and Bernie Sanders believe the IRS has the authority to change unilaterally the tax rules to collect over $100 billion over 10 years, every though that power belongs exclusively and explicitly to Congress.

Last week, I reviewed the arguments of James Wilson, one of the primary authors of the Constitution, as they pertained to early taxation.

This week I look at Alexander Hamilton. Hamilton wrote all of the Federalist Papers, documents defending the US Constitution as we have it today before it was ratified. He founded the Federalist political party, established the first National Bank of the US, and championed the internal alcohol tax that provoked Appalachian farmers to armed revolt in 1791’s Whiskey Rebellion. His beliefs are alive and well in President Obama.

In Federalist 36, Hamilton tellingly betrays his belief that the property of rich people is luxury rather than true property. He writes:

. . . difficulty in the exercise of the power of internal taxation . . . must naturally tend to make it a fixed point of policy in the national administration to go as far as may be practicable in making the luxury of the rich tributary to the public treasury, in order to diminish the necessity of those impositions which might create dissatisfaction in the poorer and most numerous classes of society.

In other words, internal taxation will always be unpopular. If the government were to implement such taxes fairly on everyone, there would be public outcry. However, if they tax the rich on what is popularly deemed excess wealth, the unfairness will make those spared content with the policy.

Fundamentally, he finds it laudable that the government will naturally treat different classes of citizens unfairly. This behavior will be reinforced by populist sentiment.

He concludes this section celebrating that his vision for internal taxation and popular sentiment coincide in the policy of taxing the rich. He writes:

Happy it is when the interest which the government has in the preservation of its own power, coincides with a proper distribution of the public burdens, and tends to guard the least wealthy part of the community from oppression!

It is not hard to see how this belief can corrupt the principles of those in power – if it is good to take a certain class of citizens’ money, at what point do you stop? More can always be extracted from the “luxury of the rich” to fund whatever program the government deems necessary at the moment.

It was these beliefs that led to the income tax, which lasted just a year before it became progressive in structure (apparently even some of the poor’s wealth is “luxury” too – the income tax has increased tenfold upon the poorest Americans since its inception). These beliefs led FDR to try to confiscate all income above $25,000 in 1942.

These beliefs lead President Obama to tax the wealthy even without Congress’ approval. Like Hamilton, he sees it as morally good. He does not see people he deems wealthy as true owners of their money, but temporary holders of it until such time as the government decides to expand. The income tax is inherently unfair because it taxes people differently – that is why a federal income tax was ruled unconstitutional in 1895. Pretending he stands for equality, President Obama has sought increased unfairness in the tax code by making it more progressive in structure.

Later in Hamilton’s essay, he writes:

And as I know nothing to exempt this portion of the globe from the common calamities that have befallen other parts of it, I acknowledge my aversion to every project that is calculated to disarm the government of a single weapon, which in any possible contingency might be usefully employed for the general defense and security.

Hamilton’s last argument is all-too-common today: national security needs every weapon it can get. And, make no mistake, Hamilton knowingly calls taxation a weapon.

What he does not realize is that taxes are a weapon that wounds citizens first and wartime enemies second.

Like Hamilton, President Obama uses the fear of terrorism to give agencies yet more power and yet more funding for that power. Hamilton uses the fear of unspecified “common calamities” as a reason to allow broader powers of taxation in the same way President Obama’s administration raised the specter of 54 thwarted terrorist plots to justify absorbing American call records en masse, despite knowing that such a claim was false.

Shadowy straw-men are conjured to frighten Hamilton and Obama’s audience, hoping that citizens feel sufficiently terrified that they submit to the “weapon” of greater taxation, trading freedom and property for security from nonexistent threats. This, combined with the belief among people like Hamilton and Obama that the money of the rich is not really rightfully theirs, makes it all too easy for the government to tread hard upon all Americans. As we have seen from the startling increase in all tax rates from 1913 to today, it is not only the wealth of “the 1%” the government desires.

Hamilton needs his own words thrown back at him. We should be averse to every project that is calculated to arm the government with more money and power, lest they simply enable what is perhaps the world’s most common calamity: government oppression.

Concurrent with Hamilton’s Federalist Papers, an Anti-Federalist writing under the name “An Old Whig” wrote his warnings to Americans. Instead of Obama and Hamilton’s naive optimism in a benevolent government, consider what libertarian skepticism foresaw in 1787:

We have been witnesses of such a profuse expenditure of public money at some periods, as these states could never support. This profusion ought to convince us that if all the treasures of the continent are intrusted to the power of Congress, there is too much reason to fear that the whole will be consumed by them, and nothing left to the individual states; and judging from past experience we may venture to presage that the people will be fleeced without mercy, if no check is maintained upon the power of Congress in the articles of taxation.