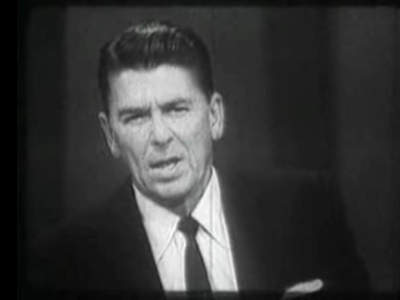 As much a fan of Ronald Regan as I am I had never had a chance to hear his speech in 1964 at the Republican National Convention for Barry Goldwater, “A Time for Choosing”. Jon Sutz has put online the first two decades of Regan videos including “A Time for Choosing” at Ronald Reagan: Highlights from the 1960s & 1970s.

Reagan, who at the time had recently switched from being a Democrat, understood that there is something which cuts across traditional party lines: Freedom. My favorite part of the speech was his focus on this spectrum of ideas:

You and I are told increasingly we have to choose between a left or right. Well I’d like to suggest there is no such thing as a left or right. There’s only an up or down: [up] man’s old — old-aged dream, the ultimate in individual freedom consistent with law and order, or down to the ant heap of totalitarianism. And regardless of their sincerity, their humanitarian motives, those who would trade our freedom for security have embarked on this downward course.

In this vote-harvesting time, they use terms like the “Great Society,” or as we were told a few days ago by the President, we must accept a greater government activity in the affairs of the people. But they’ve been a little more explicit in the past and among themselves; and all of the things I now will quote have appeared in print. These are not Republican accusations. For example, they have voices that say, “The cold war will end through our acceptance of a not undemocratic socialism.” Another voice says, “The profit motive has become outmoded. It must be replaced by the incentives of the welfare state.” Or, “Our traditional system of individual freedom is incapable of solving the complex problems of the 20th century.” Senator Fulbright has said at Stanford University that the Constitution is outmoded. He referred to the President as “our moral teacher and our leader,” and he says he is “hobbled in his task by the restrictions of power imposed on him by this antiquated document.” He must “be freed,” so that he “can do for us” what he knows “is best.” And Senator Clark of Pennsylvania, another articulate spokesman, defines liberalism as “meeting the material needs of the masses through the full power of centralized government.”

Well, I, for one, resent it when a representative of the people refers to you and me, the free men and women of this country, as “the masses.” This is a term we haven’t applied to ourselves in America. But beyond that, “the full power of centralized government” — this was the very thing the Founding Fathers sought to minimize. They knew that governments don’t control things. A government can’t control the economy without controlling people. And they know when a government sets out to do that, it must use force and coercion to achieve its purpose. They also knew, those Founding Fathers, that outside of its legitimate functions, government does nothing as well or as economically as the private sector of the economy.

This advice seems as pertinent today as it was then.

In addition to his speeches, you can see Reagan’s humor on his Sonny and Cher appearance as well.