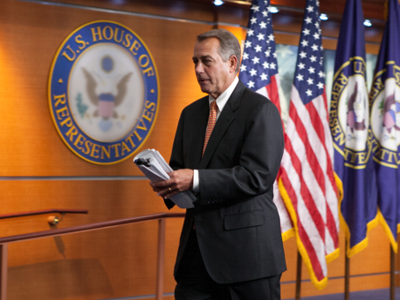 As we all know too well, the United States has been sinking deeper into debt. And each year Congress blindly votes to spend even more than last year, raising the debt ceiling ever higher. Why do we bother having a debt ceiling?

Entitlements represent an ever-increasing portion of federal spending. We collect more money to redistribute it than to use it. Corporate welfare is the norm. Pork barrel spending still runs rampant. All the attempts to starve the beast of government spending have failed.

Even though most Americans support a balanced budget amendment (a constitutional amendment that, at minimum, would cap public debt as a percentage of gross domestic product), congressional Democrats won’t even consider it. Meanwhile, we speed toward our own Greek-style bankruptcy.

This partisan deadlock offers us a novel opportunity to reach consensus: pass the budget one line item at a time (often described as “passing the budget piecemeal” by its liberal opponents).

Legislators would start this process by voting on the size of the federal budget, limiting how far into debt they are willing to go. Setting boundaries for spending before determining where it will be spent is the first principle of any solvent budget, federal or personal. Only after settling the debt ceiling discussion would they determine how to divide the limited pie.

Then Congress would allocate funds where there is widespread agreement. Not only could they fund the portions of the federal budget that are not in dispute, they could fund them for multiple years. That way, a future shutdown would not jeopardize the most essential and least controversial functions of government. Even in our divided country, there is more agreement than disagreement.

After all the noncontroversial portions of the budget have been passed and funds allocated, legislators can move on to the important debatable ones, evaluating each line in an order proposed by the Budget Committee. Once the total amount of allocated funds equals the original agreed on amount of money to be spent, discussions will be complete.

Opponents of this plan fear that some of their favorites programs may not be funded. But line-item budgeting is the solution to a runaway budget. It will force Congress to make the tradeoffs required for budget and debt restraint.

The Republicans are brilliant to implement this process. Among the first bills they proposed is funding the National Institutes of Health (NIH), which, among other goals, treats a group of children with cancer. They were defunded because of the government shutdown, and the media has placed the lives of these children on the shoulders of our representatives.

On October 2, the Republicans in the House proposed and passed a bill reinstating the entire NIH budget. Earlier that same day, Dana Bash, a CNN journalist, asked Democratic senators the question most of us want to ask.

“The House is presumably going to pass a bill that funds at least the NIH. Given what you’ve said, will you at least pass that? And if not, aren’t you playing the same political games as the Republicans?” In other words, she was asking if the Democrats are willing to work with Republicans to compromise on one budget line item at a time.

Harry Reid (D-NV) replied, “What right did they have to pick and choose what part of government is going to be funded?”

Bash persisted in her question, asking, “But if you can help one child who has cancer, why wouldn’t you do it?”

After a long silence, Chuck Schumer (D-NY) tried to come to the rescue, hastily replying, “Why put one against the other?” Reid quickly chimed in, saying, “Why would we want to do that? . . . to have someone of your intelligence to suggest such a thing maybe means you’re irresponsible and reckless.”

The conversation closed with the shocked Bash muttering, “I’m just asking a question.” And it was a good question. But the standard Democratic reply is to ask, “Why put one good cause against the other?” In other words, “Can’t we just fund everything we’ve always funded?”

As Rep. Peter Welch (D-VT) said, “There’s three battles going on right now. One is the debt ceiling, the other is keeping the lights on and the third is the government funding level.”

Reid and the others are asking us to ignore the debt ceiling by voting once again to increase it and to turn the lights back on by placing funding levels exactly as Democrats want them. However, Americans disagree sharply about where and how much money to spend. Ignoring the line-by-line approach to compromise is overlooking the easiest way to get fiscal responsibility efforts back on track.

The country cannot afford many controversial and luxury items. Our current trajectory has already moved us toward financial default. Americans look at Greece and wonder how it got so far into debt. Many of those same people blame conservatives for failing to get the job done, as though the job is voting for harmful legislation that no longer has a 51% majority.

Obamacare would not be passed today. It is so unpopular that it would fail to be funded even if we had infinite resources. In 2010 and 2012, a number of Republicans were elected specifically because of their opposition to Obamacare. They defeated the moderate Democrats who had previously given it a slim majority. Opponents of Obamacare believe that defeating this move toward socialized health care is vital to the country. It is certainly critical to representing those who elected them.

Their standoff and insistence on a line-by-line budget shows great integrity toward the people who voted for them. So they will continue to offer small funding bills on which there should be no dispute. This strategy allows both parties to come together on the functions of government where there should not be disagreement.

Meanwhile, Senate Democrats hold hostage these common interests by demanding that Republicans cave and support the funding of Obamacare. The greatest danger to Republicans is the media that will characterize the intransigence as entirely theirs. In truth, both sides are clinging passionately to their own point of view. However, this line-by-line strategy is a way to pass the budget that could end this war without any substantial casualties.