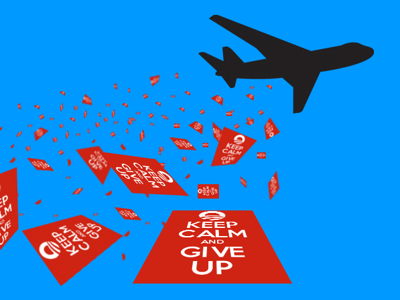 Propaganda attempts to influence public opinion. Governments use it politically to muster support during times of conflict. In psychological warfare, it is used to demoralize the enemy and pressure them to surrender.

Propaganda uses a bandwagon technique to encourage people to join the most popular side of an issue. Only positive information is included. Glittering generalities associate vague positive concepts with the government’s side of an issue. Pamphlets emphasize noble motives. Few people are willing to criticize narratives that purport to have altruistic intentions. Rewards are often offered to encourage assistance or support and provide defection from the opposition.

During the Korean War, U.S. Operation Moolah dropped bomb-shaped canisters loaded with 1.3 million propaganda leaflets that promised a $100,000 reward for the first North Korean pilot to defect and bring down a Soviet MiG-15.

Leaflet bombing has been used extensively from before World War II through the Gulf wars and Afghanistan. Propaganda today is often disseminated via radio, television, the Internet and social media.

The best government propaganda appears to come from an objective third party. It is most effective when delivered by an opponent. If even the opposition appears to support the cause, resistance feels futile.

The Patient Protection and Affordable Care Act (PPACA), better known as Obamacare, requires all business owners to provide written information to their employees explaining the legislation. Although no specific fine is specified for failing to do so, the PPACA can levy a $100 a day fine for noncompliance.

Requiring employers to deliver government propaganda is genius. It leads employees to believe their company agrees with the legislation and has given up all hope of repeal. It creates a sense of a fait accompli, the sense that the legislation’s existence and implementation is beyond alteration or elimination.

To succeed in this psychological warfare against the American people, the actual information doesn’t matter. As long as the content is vaguely positive, fewer details are preferable.

The specifics of the PPACA are extremely confusing, which helps the government gain support for the legislation. Many employees will misunderstand the facts. Those who do understand will try to enlighten their peers and, perhaps unintentionally, become salespeople for the cause.

The Voice of America reports that the government will spend $1.25 billion to inundate young people about the benefits of the Affordable Care Act. This is in addition to forcing every business in America to shill for their boondoggle.

Business owners should exercise their freedom of dissent. Here is our suggested cover letter to accompany the government-mandated information.

According to a Kaiser Family Foundation Survey, 51% of you say you have insufficient information about the Patient Protection and Affordable Care Act (PPACA) to understand how it will affect you and your family. We are required to provide you with a government-supplied handout about the new judicial directives that will take effect in 2014.

Although we are required to give you this misleading document, you do not have to believe the implications any more than we do.

We are supposed to tell you that “The Marketplace is designed to help you find health insurance that meets your needs and fits your budget.” This description of the legislation’s altruistic intent is supposed to make you less critical of its contents.

The pamphlet also suggests that “You may qualify to save money and lower your monthly premium.” Implying you may be rewarded for your cooperation is supposed to lower your resistance.

Many of you have already experienced the consequences of this legislation via notices about higher health insurance premiums. Even though premiums have already risen, they are expected to increase an additional 24% on average under the Affordable Care Act.

Jacking up prices and then offering consumers a discount coupon is one of the oldest marketing scams. The prices are especially high for the young and the healthy because the Affordable Care Act was designed to overcharge them to support the older generation. If the legislation works as intended, it will transfer a huge amount of wealth from the young and healthy to the old and sick.

And if all of us don’t participate in large numbers, prices may spiral out of control. Because coverage for preexisting conditions is mandated, the so-called exchanges may get flooded with more chronically ill customers than relatively healthy ones.

The fine for nonparticipation begins at 1% in 2014, or at least $95 per person. Even after this fine reaches its maximum, it may not be enough to compel you.

The attached propaganda aims to move your focus off the big picture and into line to sign up. No major entitlement has been successfully unwound after enlisting enough dependents.

All negative consequences were deliberately left out of the propaganda. You are being asked to ignore losing spousal coverage, being reduced to part time or having your current insurance cancelled. The act may result in fewer people covered by health insurance and significantly higher costs for those who are covered. But none of these negative consequences are mentioned. You are not expected to look beyond good intentions.

PPACA names the plans bronze, silver, gold and platinum, supposedly to make health insurance easier to understand. They try to sell the idea that limiting your choices is better for you. But every plan except bronze will self-select for those with larger than average medical expenses, a fluke of those good intentions that will push that premium higher as well. The more expensive plans, as a result, will likely be a bad financial decision for the young or healthy even if that level of coverage is what they want.

This literature implies that this particular insurance system is the only way to pay for health care. Health savings accounts coupled with a high-deductible health insurance policy were becoming a much more popular alternative and providing an incentive to contain health care costs. They used insurance the way it was intended, for catastrophic loss, not the first dollar spent. However, under PPACA, this healthy system is not only ignored, it might even become illegal.

The government makes this socialized solution seem like it will create health care nirvana in the United States. But it is unrealistic and unfair to the next generation. It may very well make us nostalgic for the days when you could just pay the doctor cash.

Please recognize the literature for what it is: propaganda. Ignore it if you want, read it if you’re interested, but don’t be surprised by its vacuous promotion.