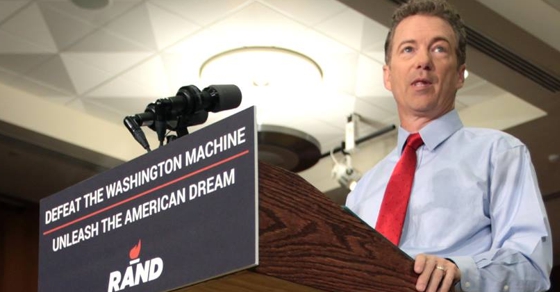 2016 Presidential hopeful Rand Paul has released a sketch of an intriguing tax plan .

He would have a flat 14.5% income tax on both wage and investment income for individuals and businesses. He would eliminate all itemized deductions except for mortgage interest and charity and would maintain the Earned Income Tax Credit. He would remove our current personal exemption system, replacing it with one where “The first $50,000 of income for a family of four would not be taxed.” (Presumably, some version of this exemption would apply to families that don’t have exactly two children, but he does not provide details.) He would eliminate gift taxes, estate taxes, and the payroll tax.

All of these changes are music to the ears of libertarians and other fiscal conservatives who have long complained that our current tax system is too punitive and complex. Liberals, however, may be skeptical of any system reducing the top marginal rate from 39.6% and 39.1% for individuals and businesses respectively to just 14.5%, especially when it superficially seems to increase taxes on the poorest families from 10% to 14.5%.

However, the IRS publishes massive amounts of data on the tax returns it collects. We can use that data to find the average amounts of income and deductions for all families using the “Married Filing Jointly” tax status – the vast majority of middle-class families – and then compare our current tax system to Paul’s proposal to see if Paul’s plan really would punish average Americans.

A hypothetical four-person family under Rand Paul’s plan would thus have a gross income of $102,298 (wages + interest + dividends). $11,188 of the average Married-Filing-Jointly family’s itemized deductions was for interest paid and $6,263 for charitable donations, both of which would reduce their income in Paul’s plan. With Paul’s $50,000 exemption, they have $34,847 of taxable income. This would all be taxed at 14.5%, leaving a tax bill of $5,052.

Under current law, the average four-person family would owe $10,504. The same family under Rand Paul’s plan would only pay $5,052.

For those who want a progressive tax code regardless, consider this: if having a top marginal tax rate of 39.6% works so well, why are there still extremely wealthy people who pay far less? It is because, as many liberal commentators have pointed out, there are many obscure special-interest deductions available to those with considerable resources threatened by high marginal tax rates. Rand Paul eliminates nearly all the loopholes by explicitly allowing only two itemized deductions and the Earned Income Tax Credit. All the wealthy people that liberals raise as examples of societal trauma will pay the same 14.5% everybody else does. No more, but especially no less.

Take Mitt Romney. By differing accounts, he was a crook, spoiled brat, or unfair beneficiary of a corrupt system for only paying an effective tax rate of 14.1% on his multi-million dollar income. He paid so little because most of his income came from the same tax-advantaged investments from which anybody else can benefit and also because his family was extremely charitable. That is, they didn’t keep a lot of the money they made, which, for some reason, is a virtue for Bill Clinton but not Romney.

Using Romney’s 2011 tax return as a basis , under Rand Paul’s plan, he would pay an effective tax rate of 14.5%. Despite reducing Romney’s marginal rate from 39.6% to 14.5%, Rand Paul’s tax system causes him to pay more, not less, by making everyone play by the same rules.

Paul’s plan then seems to decrease taxes paid for average families and increase taxes paid by the wealthy, all the while making the filing process simpler. This should please both conservatives and liberals. For this article, calculating Paul’s proposed tax on our hypothetical family took less than five minutes after looking up the relevant IRS data. On average, filing currently takes 13 hours .

Of course, all we have seen are the sketches of his plan. How a four-person family gets an exemption of $50,000 remains unclear. He does not appear to allow itemized deductions for state taxes, which will punish people in states with already high tax burdens. He treats investment income like all other income despite the common complaint that it has already been taxed at the corporation level and mostly taxes inflation.

He acknowledges that his plan will result in large drops in revenue for the federal government in the short-term, believing that he can cut spending to close the gap and that increased capital in the markets and in individuals’ accounts will lead to greater overall economic activity and thus greater tax revenue from increased prosperity. By doing away with payroll taxes, he removes most of the contributions to Social Security and Medicare. Details on how he plans to cut spending and change Social Security and Medicare have not yet been released.

Rand Paul’s tax plan makes radical changes and raises several important questions, but from initial glance, it looks like it could be good for everybody. The only ones who seem to fare poorly under his plan are those people who make a living off getting the government to spend money on their pet cause or constituency. Perhaps radical change wouldn’t be so bad after all.