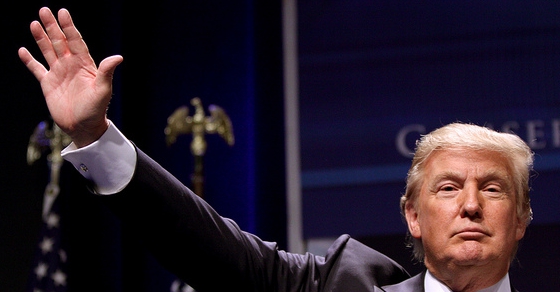 Donald Trump, another 2016 Presidential hopeful, has released a tax plan .

Trump would keep capital gains tax rates unchanged, but alters when the brackets apply. His 0% capital gains tax applies to the first $100,000 of taxable income, his 15% to the first $300,000, and 20% to everything exceeding $300,000. He would make the maximum business tax rate 15% and allow foreign companies to return cash held overseas to American markets for a one-time 10% “repatriation” fee.

He would eliminate the Alternative Minimum Tax and estate taxes. He plans to “steepen” the curve of PEP and Pease phase-outs for personal exemptions and itemized deductions, making high-income taxpayers lose those tax deductions more quickly. He does not explain how or at what rate.

Regarding itemized deductions and exemptions go, he is similarly short on details:

Notably, this excludes the deduction for state taxes paid. Despite Trump’s promise later that “no company should face double taxation” (by which, he means that he will not cut the Foreign Income Tax Credit), individuals are apparently fair game.

This statement is especially confusing since his changes to the capital gains tax actually make it more progressive. His plan would let $25,000 more go untaxed because his 15% gains bracket kicks in later than our current one does, but his 20% gains bracket starts $165,000 earlier: the poor pay less and the rich pay more. He also does nothing to eliminate Obamacare’s 3.8% investment income surtax. All of this is double taxation, a fact which Trump does not address.

Trump advocates “tax relief for all Americans”, but makes PEP and Pease phase-outs harsher to penalize only high-income taxpayers. He makes a point of eliminating the “marriage penalty” in his proposed tax brackets, but does not eliminate the same discrepancies in the Net Investment Income Tax, Earned Income Tax Credit, Child Tax Credit, or PEP and Pease phase-outs which can cause similar damage.

He eliminates the estate tax but says nothing about gift taxes, which exist primarily to catch people trying to dodge the estate tax. If death should not be a taxable event, why is generosity?

Trump wants to “help businesses, entrepreneurs and freelancers grow and prosper”, so he makes sure to mention that since he lowered the maximum tax rate on business income to 15%, small business owners and partners likely won’t have to face the measures he’s taking to increase taxes on the wealthy (his “steepened” PEP and Pease phase-outs). But this applies only to the owners – employees’ wages could be taxed up to 25%. If he really wants to help businesses, why not treat all income earned through productive labor the same and lower the cost of hiring?

Trump wants a simpler tax code, but his plan won’t make it much simpler for ordinary folks. Trump doesn’t change what is or is not taxable income. He maybe eliminates some itemized deductions, but most people really only take four anyway: charity, mortgage interest, state  taxes paid, and possibly medical expenses. The Net Investment Income Tax and every tax credit, each with different rules, remain. PEP and Pease phase-outs remain. Sure, he eliminates the estate tax and Alternative Minimum Tax, but killing two forms does not make the tax code suddenly comprehensible.

His proposals, in some broad strokes, make things better. He lowers taxes overall. He also makes some taxes even more progressive than they already are. He mentions many familiar talking-points as the reason for changes he makes, but applies them so inconsistently as to give room to doubt that he truly grasps the principles underlying his sound bites.

This is not a bad plan, but it is not intellectually consistent nor does it live up to what Trump says he wants to accomplish. Tax season under Trump’s plan would likely be just as complicated but slightly less painful.

Less pain at tax time would be a welcome change, but one could expect more from Trump’s bold reputation.