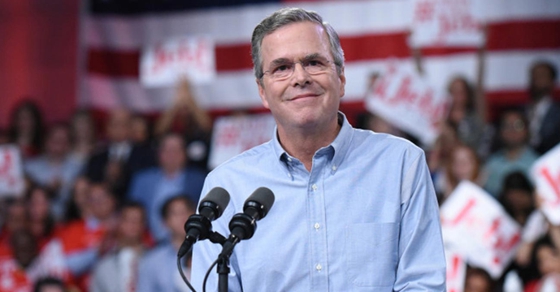 Jeb Bush, yet another 2016 Presidential hopeful, has released a tax plan .

He would eliminate the PEP and Pease exemption and itemized deduction phase-outs, Obamacare’s 3.8% Net Investment Income Tax, the Alternative Minimum Tax, and estate taxes. He would also expand the Earned Income Tax Credit. Most of these are standard Republican goals.

His most unique proposal is the concept of a “secondary earner” tax return. He fears that our current progressive tax system punishes dual-income families by combining their wages together before taxing them both at a higher rate, discouraging people from entering the workforce. The Married Filing Separate status is supposed to help alleviate this, but a host of regulations aimed at keeping wealthy filers from lowering taxes make this difficult.

Bush’s proposal is like a simplified version of the Married Filing Separate status. He would allow a “secondary earner” (which he does not define) to file only their wages on a separate return as though Single. The primary earner would keep all of the family’s combined deductions and miscellaneous income. Allowing any amount of income to be taxed separately would likely lower a family’s taxes simply because we tax people more harshly the more they make.

Bush also would exempt workers who are of full retirement age from the employee portion of payroll taxes. This is fairly unique, although Rand Paul would abolish payroll taxes entirely.

He seems to see itemized deductions as needlessly complex: he wants to “reduce the need for itemization” (italics mine). As a result, though he removes the Pease phase-out limitation, he caps allowable deductions (except charity) at 2% of AGI.

Further, he eliminates the deduction for state and local income taxes because he believes that it “favors filers in states with high tax rates…High tax, high spending states have the right to conduct whatever fiscal policies they prefer, but citizens of lower tax states should not be required to pay for it.” He would increase the amount of the standard deduction by $5,000 per person ($10,000 total for couples filing jointly) to compensate for these changes.

He would lower the top corporate tax rate to 20%. He would also allow full and immediate expensing of capital investments. This is a common proposal among the Republican hopefuls, but welcome for everyone who has had the misfortune to deal with depreciation schedules.

He would end the business tax on foreign-earned income, which would help global free enterprise. Confusingly, he would also impose a one-time “repatriation tax of up to 8.75%” on deferred foreign income which is currently taxable but has not yet been taxed by being reinvested in the foreign branch of a domestic company.

This brings us to an unfortunately common section of my reviews of candidates’ tax plans. While Bush has a noble intention of simplifying things, the rules he proposes conflict with his goals.

Take his “repatriation fee”. If he plans to make all foreign-earned income non-taxable and it is important enough that businesses invest in themselves that he would allow full and immediate expensing, why would he tax deferred foreign income that was deferred because it was reinvested it in the business at all? Companies have done what he wants to encourage, but he will punish them for it.

His largest problem is his approach to itemized deductions. He wants to eliminate it as an option because the option of itemizing certain expenses has let special interests and crony capitalists run wild. But he wants to encourage charity, so he leaves that as the only full itemized deduction possible.

The issue is that you can’t both itemize and take his strengthened standard deduction. In his model, it will take donating more than $22,600 to make itemizing worthwhile and get any tax benefit from their charity. I don’t imagine that is what Bush intended.

Worse, he eliminates the ability to deduct state taxes paid entirely. This deduction is far from a special-interest loophole for high-tax states as Bush thinks. It actually enforces the principles of a federal republic where states are sovereign in a way that limits the federal government. That is because the way it works now is that states get the first cut of taxes and the federal government can have what is left over.

Bush’s proposal lets the federal government assume the very money the person cannot keep because they owe it to their state is still fair game for taxation. In our current system, no matter how high state and federal tax rates climb, an individual cannot be taxed more than 100% on what he earns. Bush makes that possible.

Bush’s final problem is common: he omits enough detail to raise doubt that he knows what he’s doing.

He wants to crack down on hedge fund managers’ investment income and so talks about all “non-investment income” being subject to ordinary income tax rates instead of capital gains rates to ensure “only those putting real capital at risk will be able to benefit from the lower rate on capital gains.” Does Jeb Bush consider the average investor with only several thousand invested in various large companies as having “real capital at risk” or will their capital gains be taxed at ordinary income rates?

He exempts workers of retirement age from the employee half of payroll taxes, presumably because he wants to reward them for continuing to be productive at an age when they could retire and depend on the government, but does not extend the same logic to the employer’s half of the same taxes. If cutting costs on businesses encourages growth and hiring, why not cut this cost?

Bush’s tax plan is in good company with Trump, Rubio, and Lee. It hits many common Republican talking points, proposes some needed changes, but doesn’t seem to take its own reasoning very seriously. That, to me, does not bode well for someone claiming to perform a “complete overhaul of the U.S. tax code”. If that’s what you really want, Rand Paul may be your only option.