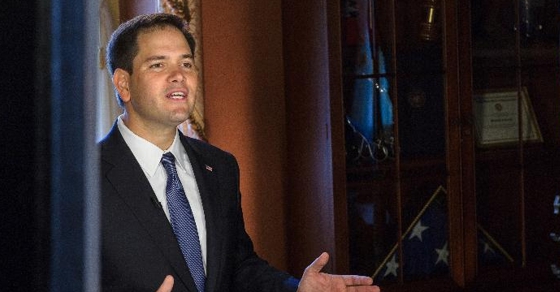 Prior to Rand Paul’s proposed tax plan, 2016 Presidential hopeful Marco Rubio released a plan of his own that he co-authored with U.S. Senator Mike Lee .

Rubio and Lee’s largest changes are to the individual income tax. They collapse our current array of tax brackets into two. The first would be a 15% tax on income up to $75,000 for individual filers and $150,000 for joint filers, with the second bracket taxing 35% of all additional income. Our current system encourages going into debt by providing deductions for various kinds of interest paid. Rubio and Lee try to prevent this by eliminating those deductions but make interest income non-taxable. They eliminate all itemized deductions except for charity and a “refined” home mortgage deduction, but do not explain how this would work since it currently only allows the deduction of interest paid on mortgage debt. They eliminate the standard deduction and all personal and dependency exemptions. These are replaced by $2,000 personal tax credits which are substantially more generous than deductions dollar-for-dollar. They amend the child tax credit to make it worth $2,500 instead of $1,000 and remove its phase-out provisions.

Additionally, Rubio and Lee change business taxes. They create a flat 25% tax on business income. They would allow business purchases to be immediately and fully expensed, removing the hassle of dealing with depreciation schedules. They say they intend to eliminate special-interest business deductions but do not elaborate any more than stating the claim. They acknowledge the common complaint that dividends and capital gains are taxed twice – first at the corporate level when profits are earned and second at an individual level after they’re distributed – by making dividends and capital gains non-taxable at the individual level.

Rubio and Lee also plan to eliminate the Alternative Minimum Tax and the estate tax, but make no mention of gift taxes, which exist solely to tax people trying to dodge the estate tax.

As we found when analyzing Rand Paul’s plan, the IRS has compiled a lot of data from tax returns. We can use this to create a hypothetical “average” American family’s tax data and then compare how this family fares under current law to Rubio and Lee’s plan.

Under Rubio and Lee’s tax plan, their interest and dividend income would not be taxable. This gives them a gross income of $88,871. They would only be allowed to keep their charitable contributions as tax deductions, and since Rubio and Lee failed to explain how their reformed mortgage deduction would function, we cannot include it in our analysis. That leaves this family with only $6,263 of deductions, yielding taxable income of $82,608. Since this is a joint return and Rubio and Lee’s 35% income tax bracket kicks in at $150,000, everything is taxed at 15%. The tax due is $12,391. Each spouse would get a $2,000 tax credit and each child qualifies them for another $2,500 tax credit, so they reduce their liability by a total of $9,000. Ultimately, their tax bill is only $3,391.

However, Rubo and Lee’s child tax credit was about 50% of this family’s tax savings. What happens for couples without children?

Under Rubio and Lee’s tax plan, the couple’s taxable income or gross tax due would not change, but they would lose their $5,000 child tax credit. With a gross tax bill of $12,391, they would only be allowed their personal credits of $2,000 each, leaving them to owe $8,391.

Rubio and Lee’s reasoning for so heavily subsidizing children is that parents pay twice to fund old-age entitlement programs from which all people benefit: once by paying payroll taxes themselves and twice by, in their words, “paying to raise the next generation that will pay payroll taxes.” Parents are never compensated for this second type of expense (child-rearing), but it is necessary for the continuation of our country’s entitlement systems. So, in their minds, this justifies using the tax code to subsidize lifestyle choices.

While well-intentioned, this disagrees with the logic of their elimination of interest deductions: they thought it was wrong to use the tax code to encourage a lifestyle choice (going into debt). While the government does have a vested interest in future populations, Rubio and Lee’s solution is to eliminate tax rules available to all filers and make up for that by giving tax breaks only to parents. This distorts the tax code so that the system they’ve created is worse than the one they currently disdain unless you happen to have children. But those children will grow up and empty-nesters will see all Rubio and Lee’s tax breaks disappear.

Rubio and Lee do make definite improvements. They streamline the brackets, making taxes easier to calculate, and eliminating deductions will save people time in filing. They exclude some income from taxation, which is a welcome change, and they eliminate some of the most complex and pernicious tax systems on our books by killing Alternative Minimum Tax, estate taxes, double-taxation of dividends and capital gains, and depreciation schedules. Sadly, this good is largely undone by a well-meaning but naive tilt of the playing field towards parents.

Rubio and Lee do include four hypothetical taxpayers at the end of their report, naturally all reporting lower tax liability under their new system. But Rubio and Lee do not explain their math. That raises doubt that perhaps their claims will not hold up so well against real-life data. Or real-life people.