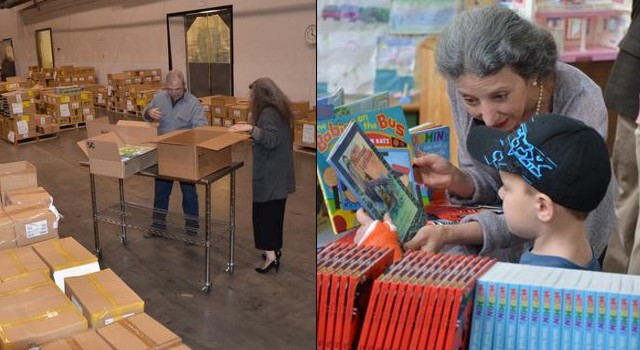 The 30-million-word gap between children of means and children of poverty can be added to the list of barriers that children growing up in poverty must overcome to become successful. While it is difficult to fully insulate a child from the trauma of a difficult upbringing, there is something that can be done to help close the word gap. Studies have suggested that simply having books available for children to read is an effective way of increasing a child’s success in life. The number of books in the home is the only measurement that correlates significantly with reading scores. Access to print is the most successful way to improve the reading achievement of low-income children. Children with greater access to books express more enjoyment of academics. Independent of other factors like parents’ education, occupation, and class, children growing up in homes with at least twenty books get three years more schooling than children from bookless homes.

For these reasons and more, I believe that ensuring each child has access to age-appropriate books is an effective way to combat generational barriers. This is where my love and support of the Soho Center comes in.

The Soho Center is a 501(c)(3) non-profit in Central Virginia, founded in 1972, that helps over 200,000 children each year. Their mission is to promote children’s literacy, school readiness, school success, and create children’s happiness. They strive to accomplish this by donating quality, hardcover children’s books to Virginia public schools, the University of Virginia Children’s Hospital, hundreds of after-school programs, Head Start and pre-school classrooms, the USO (United Service Organizations), public libraries, child care providers, and other child-related programs in Central Virginia and across the state.

Rather than simply buying new children’s books and donating them to children in need of them, major publishers donate high-quality books to the Soho Center in support of their mission. This is especially true when publishers are reprinting their well-selling books or are coming out with new editions.

Because the publishers get a tax deduction up to twice the production costs and Soho gets the books at no cost, this means that even if the child recipient likes the book just a little bit there has been an economic gain in the world. The publisher has gained a tax deduction and saved the costs of pulping or moving the books while the child has gained whatever enjoyment and learning he or she can from the gift. Unlike other gifts, this means there is little-to-no deadweight loss.

The Soho Center receives in donations approximately three-and-a-half-million dollars of books each year. When offered a new book, Jeanna Beker, Soho’s founder and director, takes the time to research the book, only accepts the best titles, and then curates which books are given out for each project.

Jeanna has a 49-year impressive history as an educator. She started and directed the largest early childhood program in New York City for 18 years, did teacher-training with four universities, year-round parent education programs, and was chosen to establish the United Nations Child Care Centre. For the past 31 years, she and her husband, George Beker, have been helping children in Central Virginia and across the state with major Book Giveaways, Soho’s National Children’s Literacy website, and other innovative child-related projects.

She carefully curates the books given out to ensure that they are sensitive to the culture and needs of the children receiving them and that they are suitable and diverse enough to appeal to children of different ages, reading levels, and interests.

While the task of selecting the perfect book for a giveaway may seem simple to those of us who are from privileged upbringings, imagine selecting the perfect children’s book for a child in the foster care system or who is terminally ill or who has food instability. There are many great books which are insensitive to those situations, but Jeanna makes sure to pick the right ones.

Soho gives away about three-and-a-half-million dollars of new children’s books each year. Some of their major ongoing programs are:

Furthermore, Soho partners with charitable organizations who are serving children in need so that those organizations can use Soho’s wealth of books to distribute them to the children they are serving. In this way by partnering with different organizations, Soho also gives books to children entering foster care, in homeless shelters, in Head Start and early childhood classrooms, and whose parents serve in all branches of the military. Soho even gives away fun, Halloween-themed children’s books at UVA’s trick-or-treating event on the Lawn.

Soho’s administrative expenses (as confirmed by annual independent audits) are under 1% each year. The other 99% goes toward their work. Most of their expenses come from warehouse space (publishers donate books at the end of a school or fiscal year but recipients aren’t ready for them until the new year starts), palletizing and shipping truckloads of books (heavy and sometimes costly), and assembling custom assortments from hundreds of boxes of books for giveaways and projects.

Soho does great work and, if you aren’t convinced yet, one conversation with Jeanna will likely inspire you!

Soho is my Amazon Smile charity recipient, I donate to them generously from my charity budget, and the 65% NAP credits they offer are my favorite way to pay my state taxes.