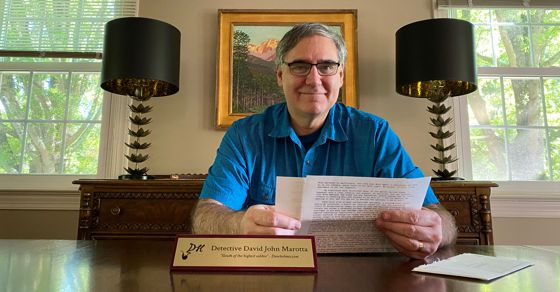 I’ve been a Sherlock Holmes fan for a long time. In addition to the original works by Arthur Conan Doyle, many other authors have written additional stories since the character of Sherlock Holmes passed into the public domain. Often these new stories expand the details on a small case mentioned in passing in Doyle’s original novels. For me, I love the idea of Sherlock Homes more than any one author’s work about him.

For Christmas this year, my daughter, Megan, gave me a subscription to “Dear Holmes.” With a subscription, comes the joy of a pretend Holmes mystery.

To play along, you are encouraged to write back, addressing Holmes to tell him your theories. Then, at the end of the month after several letters from the clients, Holmes writes a final letter to you where he solves the case.

The “Dear Holmes” mysteries are written by a carefully selected group of modern Sherlock Holmes writers. Then, the team at “Letter Joy” reads the replies they receive and select one subscriber to be that month’s Featured Detective, honored for their solution to the case.

The first case I was sent the “Dear Holmes” team later revealed was named “The Benign Banker.” For my great amusement, it was a case of financial fraud which I was able to solve using my 8 Rules for Safeguarding Your Money.

While this was my area of expertise, I was still intrigued to notice how much of the time that was required in order to solve the mystery was simply spent thinking about the case.

Watson describes the time required for Sherlock Holmes’ deductive method in Doyle’s “The Hound of the Baskervilles,” saying, “I knew that seclusion and solitude were very necessary for my friend in those hours of intense mental concentration during which he weighed every particle of evidence, constructed alternative theories, balanced one against the other, and made up his mind as to which points were essential and which immaterial.”

In the original story, Watson notes that it takes Holmes time, but in the next paragraph we get to move on and see the fruits of those hours spent thinking. In real life, you must devote the time to construct theories, weigh them against one another, and decide which one is most likely. It is a different experience than simply reading the story, and enjoyable when experienced safely in the world of pretend.

My first “Dear Holmes” letter was from from William Fallon, a Bank President in Lavenham, England, who was concerned about a number of sizable withdrawals that he couldn’t see being spent in town. The letter also talked about a new resident, Mr. Robert Beddoes, who has contributed the local charity and grown popular with both the men and women of town.  (Even writing this summary involves sifting through “which points were essential and which immaterial.”)

After the first letter, I wrote to Holmes summarizing my suspicions and telling the client not to trust anything from Mr. Beddoes. I printed my letter on business letterhead and wrote like I was an expert witness.

An excerpt from my letter was:

Mr. Fallon is concerned by a number of sizable withdrawals, in cash, from his bank as well he might. This, along with what you have already determined, suggests that they are potentially part of a fraudulent business venture with Mr. Beddoes. I say fraudulent because everything about Mr. Beddoes as well as the limited information we have about the venture exhibits all the signs of a fraudulent venture. I would try to get from one of your customers the confidence to tell you the nature of the business venture Mr. Beddoes offers. I am fairly certain he is up to no good.

Often, people’s greed or fear of missing out get the better of their judgement. I thought it was important to establish not to trust Mr. Beddoes as strongly as possible in the first letter.

While I knew that Mr. Beddoes was probably fraudulent, I did some research and learned that trusting people because they seem to be wealthy is a long-standing technique of con artists. I found a member of parliament, John Sadleir, who served as the inspiration of Charles Dickens’ Mr. Merdle in “Little Dorrit” as a prior example of the day. So I took confidence in describing Mr. Beddoes as having all the characteristics of a con-man, writing:

In many ways his character shows him to be a flimflam man. He is purchasing rounds at the inn. He is flirting with the single women. He is ostentatious with wealth he probably doesn’t have. Mr. Beddoes’ clothing and accoutrements are irrelevant to his wealth. Similar to John Sadlier and the Tipperary Joint Stock Bank affair, a confident man might even be an MP. Most swindlers pretend to have lifestyles that only the wealthy could afford. Such is part of the act that they play. In short, he is playing his part in an affinity scam right down to contributing to the local Presbyterian Church.

In short, Robert Beddoes is a “sobered debtor”, the “oddest robber” or any other anagram of what is probably a fictitious name.

I wasn’t sure about including the anagram of his name. But I found out later that in over 100+ entries, only one other submission to “Dear Holmes” did so.

In my assessment, I relied heavily on our “Safeguarding Your Money” series. I am amazed at how often simply taking the advice of this series would have saved investors from the latest Ponzi sceme. You don’t have to know the specifics of a scam to know that an investment is a scam. As my brother who is a lawyer says, “You can’t make a good deal with a bad person.”

In that first letter, I wrote:

Mr. Fallon’s customers have already failed to safeguard their money according to at least four of my eight principles published in our local newspaper eleven years ago. They have allowed their advisor custody of their investments. They did not walk away from “too good to be true.” They have not insisted on publicly priced and traded investments. And they have trusted an advisor with a lavish lifestyle. All in all, they are taking a callous risk with their money. And it will not turn out well.

The first letter to me only described Mr. Beddoes’ praise-worthy qualities. Even after the last letter, he was not clearly the villain. But stating as clearly as possible in the first letter that he was lying would have been important to minimize the harm caused to the community.

I ended my first letter with:

Mr Beddoes claims to be a scientist of some sort. I can imagine his piercing blue eyes swinging his gold stone watch chain and mesmerizing the locals with his tales of finding great wealth. But if there really were great wealth, and Beddoes were a wealthy man, then why would he need or want any investors.

The sooner someone gets to the bottom of this affair the less harm it must necessarily do.

I was praised for being both decisive and expeditious in solving and pinpointing Beddoes’ precise motives.

By my last letter, I had solved the case, decisively knowing that Beddoes was salting a mine with gold dust. In that letter, I also found a prior example of such fraud in order to add the flavor of supposedly current events in Lewis Hansen’s scam of the Corona Mining and Milling Company of southern California in the late 1800s.

In my last letter, I stated:

I am writing to you directly to urge you not to invest in the supposed gold mine. I stand by my original analysis that Mr. Beddoes is a flimflam charlatan. Gold mining fraud is among the oldest in history. As I said in my first letter, “If there really were great wealth, and Beddoes were a wealthy man, then why would he need or want investors?”

Greed is a terrible motivator. But Mr. Beddoes had all the hallmarks of a poor investment. The details, which are lies, are unimportant.

In this case, however, the details are now known.

Mr. Beddoes has been salting the mine using a shotgun to shoot gold dust onto mine walls. The “smell of blasting powder” was mostly likely the smell of the shotgun. There is no gold in Lavenham.

Something similar just happened here in the United States a few years ago in Southern California as Lewis Hansen of the Corona Mining and Milling Company used similar tricks to vastly overestimate the gold content and then sell his shares. The mining rights were considered worthless.

In the end, I was given the Featured Detective award in the blog post, “There’s a New (Featured) Detective in Town… ” which read in part:

Detective David M. not only suspected Beddoes and his associates, but also highlighted the relevance of Beddoes’ gold chain, his attempts at appeasing the locals, and even his donations to Lavenham’s Presbyterian Church. Detective David also submitted a concise follow up to his original entry, taking note of the “smell of blasting powder” and definitively stating that Beddoes salted the mine.

Congratulations from the Dear Holmes Team to Detective David – such a combination of accurate detail and urgent speed would have been critical in the pursuit of Beddoes.

I am honored to have won Featured Detective on my first case. My award was the “Dear Holmes” desk nameplate with “Sleuth of the highest calibre” as shown in the photo. I count it especially fortunate that my first case received involved investment fraud, and as a result I am happy that I was able to feature this fun service and interesting case here.