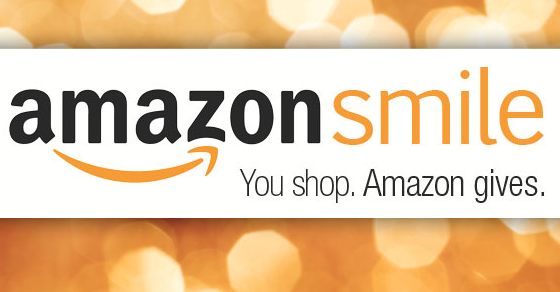 Last December (2013 ) Amazon began offering to give a percentage (0.5%) of what you purchase to the charity of your choice. They call it “AmazonSmile.” Their tag line is “You shop. Amazon gives.” and they describe the process as “a simple, automatic way to support your favorite charity.” I just heard about it recently when Amazon invited me to designate a charity via a pop-up when I logged in. Perhaps you already know about this initiative, but in case you haven’t, here is how it works:

(2) In your personal account menu near the upper right, select “Change Your Charity”: 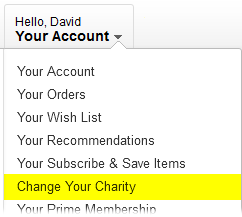 (3) This will bring you to a screen where you can either select one of their spotlight charities or pick your own charitable organization. Remember that your charity might have a different official name. Amazon appears to have the entire 503(3)(c) charity database, so you should be able to find your charity:

(4) After clicking “Search” you can find your charity in the list and click “Select.” You may be able to confirm that you have the correct selection by the City and State the charity is located in:

(5) When you are all done, there will be a constant reminder of the charities you are supporting in the upper left corner of the Amazon site:

Many companies designate a portion of their revenue to charitable giving, and it has positive effects in many different ways.

Amazon has decided both to be charitably inclined and also to allow its customers to give to the charity that excites them the most. It is a brilliant way to avoid the potential negative feelings that might be associated with having to take stands which are tangential to what unites their customers. Who can argue with letting their customers decide with a percentage of their purchases through Amazon? What could be less controversial than giving customers the freedom of choice?

To be clear, this is not a substitution for your own charitable giving. Some have argued that the good feeling that you get from giving 0.5% to a charity might substitute for more significant giving, I will reiterate what they have written:

But please don’t let this be the only way you give.