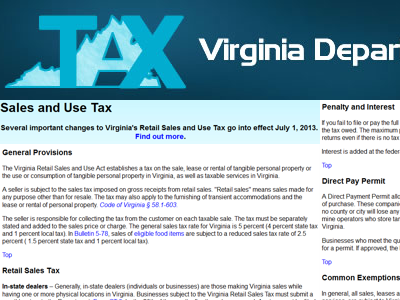 States started with a sales tax. Then they added a use tax to collect revenue that escapes the sales tax. Now the Senate has passed the Marketplace Fairness Act (MFA) to force companies in other states to collect the tax. Few individuals comply with the use tax, and where everyone is guilty, no one is guilty.

As King Louis XIV of France’s minister of finance said in the 17th century, “The art of taxation consists in so plucking the goose as to obtain the largest amount of feathers with the least possible amount of hissing.”

The MFA isn’t a new tax, but it is a previously uncollected tax. In that sense it imposes a new tax burden. Estimates suggest that an additional $23 billion will be collected. The average increase might be $170 per person. As people who work with small businesses, we would gladly send them twice that amount every year to avoid the regulatory compliance issues.

Compliance isn’t just a technical burden. It is a threat of legal liability. The bill allows state tax audits by any state against any online vendor. Such audits are accompanied by specific forms and deadlines. Penalties are owed if you are late or have made mistakes. We all make mistakes.

Increasingly, governments are sending automatically generated paper audits when some simplistic calculation of various lines of your tax forms leave an unexplained gap. Many explanations might justify the difference, but the automatically generated dunning letter costs the IRS nothing, whereas the compliance justification costs of the individual or small business owner is hundreds of dollars paid to accountants or staff to respond to the audit.

We see many of these each year. Each issue takes months to resolve to the satisfaction of the governmental agency that often isn’t even sure why the form with all its threats and penalties was sent in the first place. Small business owners are too busy running their companies to spend time answering auto-generated paper audits.

Compliance costs should not be discounted. Americans spend an estimated 6.6 billion hours per year filling out tax forms. Depending on the size of the business, the costs of compliance can exceed the revenue collected.

For example, imagine that your state simply sent you a letter claiming you owed an additional $500 in online unpaid use tax for every member of your family. You might have 30 days to either pay or dispute the assessment. Even though this is potentially three times what you ought to owe, you would probably not have the records to prove a lesser amount.

If you think putting this burden of compliance on small businesses is trivial and the tax is truly a tax already owed, try complying with the law. See if you can figure out how much you owe in use tax, when the tax is owed and where the money should be sent. Burdening businesses with paper audits from 50 different states is a surefire way to reduce the number of small businesses.

Any online company with less than $1 million in annual revenue will be exempt from the law. Revenue, not profits, means that any company with just over $1 million in revenue and a slim profit margin might spend half that profit implementing a collection system, sending the revenue to the states and dealing with the inevitable bureaucratic snafus.

At first we simply refused to complete their forms. We were selling the software inexpensively and refused to sell if there were changes to the legal agreement or any additional effort was required. The hospital administrator begged us to fill out the forms, assuring us it was simple and no sales tax collection would be required. We gave in, but it was a mistake.

Three years later the dunning letters were still arriving. Forms were required even if the form was all zeros. The forms were complex, and the documentation for the forms was unintelligible. We filled them out as best we could, but the state was never satisfied. Specialists are required for every type of government compliance. The simplest government forms are your personal tax return, and most people get help filling them out. We finally had our company deleted from their database but not before wasting hours trying to resolve our initial mistake in doing business in the state in the first place.

Every company you do business with will be required to collect information about you and save that information to support their sales tax collection compliance. The more information required for compliance, the greater the chance that your information will be compromised and your identity stolen.

Small businesses have suggested using the official definition of a small business as one with less than $30 million in annual revenue. If you include the potential for each state to send paper audits, there isn’t revenue high enough to justify the additional compliance burden.

Many people consider the sales tax to be a fairer tax because it is less progressive. But sales tax discourages spending wherever the tax is collected. And it still won’t be collected fairly.

Foreign vendors are not subject to U.S. law, so they will not be required to collect sales tax. That means Canadian vendors will now have a significant advantage over U.S. online sellers because sales tax isn’t collected and use tax is hard to enforce. And now even though we live in Virginia, when we purchase a gift from Amazon and mail it to a family member in California, we will get charged California sales tax.

It is only our own citizens who will be punished in this way. Customers from other countries will continue to be able to buy from U.S. online companies without paying any sales tax. The legislation may create an equal footing between U.S. online shops and bricks-and-mortar stores but only by disadvantaging both. U.S. companies are already drowning under the highest corporate tax rate in the world. Plugging up their last air hole of Internet sales is unnecessary.

Any politician who votes for sending everyone in their district an online sales tax dunning letter will deserve any backlash they receive. Voting for the MFA is doing just that for both large and small businesses.

The government needs to simplify tax collection and reduce the size and scope of its spending, not vote to increase the tax complication and burden through the MFA.

Read more about how government regulations and compliance do not make us safer.