We wrote about Obama’s fundamentally flawed financial planning model in “Is A $3 Million IRA Sufficient For Retirement?” John Sullivan of AdvisorOne wrote a nice article entitled “IRA Cap Gives Rise to New Funding Strategies” which confirms much of what we advise. It read,

“Curbing the growth of retirement plans in a nation where 91% have less than $100k saved is insanely ignorant,” financial planner, author and speaker Rick Kahler tweeted upon news of the plan, summing the sentiment of many in the advisor industry.

Many average middle income investors are near the $3 million limits. It isn’t all that rich. It is just the time value of money of consistently saving coupled with the incredible devaluation of the dollar by the mismanagement of the federal government as they debase the currency. Sullivan’s article continued:

She said she heard from “dozens” of financial planners, estate-planning lawyers and savers themselves whose savings “hover close to that level” and are asking questions about how it would work.”

The discrimination against the private sector in favor of public employees is outrageous. And the point is it wouldn’t work. But with great obfuscation and complexity comes great opportunity. And advisors were already mulling strategies for dodging yet another government money grab if it ever came to pass. The article suggested two interesting proposals:

“Advising your children to fund Roth IRA accounts, on which tax is paid upfront and withdrawals are generally tax-free after meeting holding requirements, early in life till they reach the cap, giving their investments more time to grow beyond the cap.”

The second is setting up a Roth IRA trust to follow another provision of the budget proposal, “emptying inherited accounts within five years of the IRA owner’s death. The IRA could be emptied into the trust, and then you could still require your heirs to take withdrawals over a longer period of time, if you’d rather them do that than be hit with a one-time windfall.”

Here is an article on funding a teenager’s Roth IRA in order to gain a million-dollar retirement in which we wrote,

Starting early makes a huge difference. At the end of the first seven years of saving and investing $615 a year with an 11% rate of return, the portfolio should be earning and reinvesting over $615 per year without any additional contributions. Funding a Roth IRA for 7 years and then stopping actually results in more money than waiting 7 years and then funding it with the same annual amount for the rest of your life. The difference gets more pronounced the longer you delay. Thus contributing $615 between ages 14 and 20 and then stopping is more profitable than starting at age 40 and contributing the maximum $5,000 a year until age 70.

As we wrote in our article, “Although there is little chance of it becoming law, there is also less outrage and backlash than there ought to be.” 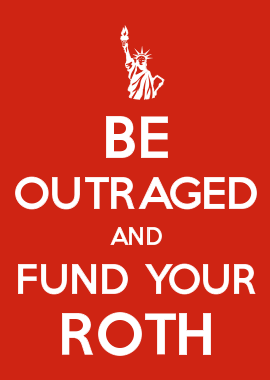