In general for financial planning, a plan is considered successful if 75% to 90% of the outcomes meet the stated goals. However, the specific percentage that is considered acceptable for various clients is debatable. For younger clients just beginning to save, the percentage is likely less important. For older clients, an outcome of 90% is often more important.

I once had an editor of a financial magazine say he wanted to know how to get 100% chance of success. The plan with a 100% chance of success involves adjusting your spending to keep it in line with your resources and adapting to the changing environment of life. It is one of the reasons that people who engage a financial planner have a higher rate of success. Having a financial advisor who provides financial planning and is monitoring the success of your plan on an ongoing basis can help redirect your plan if it starts to go off course.

Considering the latest 2019 period life table for the Social Security area population , the likelihood that one spouse from a heterosexual couple who is currently age 65 is still alive at age 95 is 21.09%.1 In financial planning, a 21% chance of failure is not necessarily considered success.

If you were to consider the probabilities as a result of these life tables, you would use age 98 for couples who are age 65 since there is a 10% chance of one of them still being alive at age 97.8.2 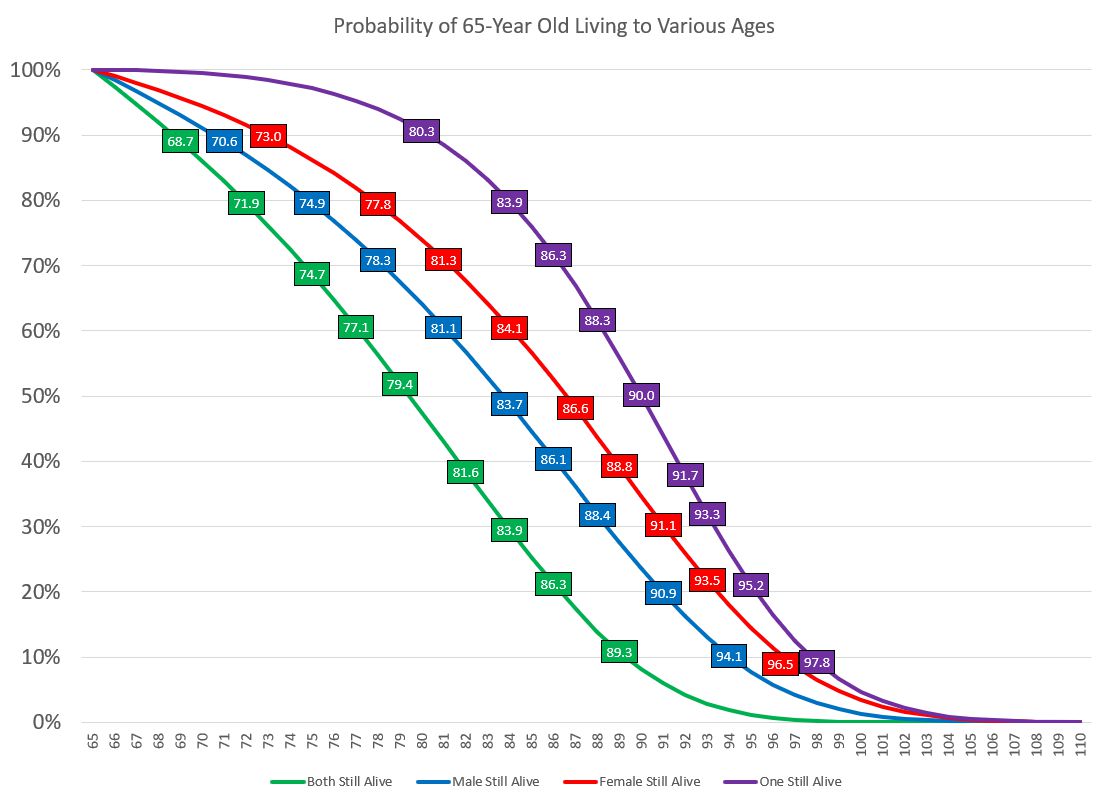 Heredity explains only a 16% effect on your life span.

People often have a feeling about their mortality, but our feelings are often unfounded. They will say, “I think planning for age 100 is too long. I don’t think I am going to live that long.”

Using 10% as an acceptable failure rate has risks to it. If we had 300 couples, a 10% failure would be accepting the risk that 30 couples might outlive their money. By increasing the planning age through their 100th year to their 101st birthday, we have a 4.73% chance that one member of a couple will still be alive. That is still 14 couples who might outlive their money. We think that is an acceptable risk.

My mother passed away young, at age 75. She had been a smoker and died from lung cancer. Smoking frequently cuts about ten years off of your life span.

After my mother passed away at age 75, I was responsible for my grandmother’s finances. She would ask if she had enough money, and I would tell her with a smile, “Grandma, you have enough money to last until age 102 and a half and then you will have to throw yourself on the mercy of your family.”

She would laugh and tell me that she didn’t think she would live that long.

My grandmother had started smoking when she started working. At her company in that day, she was able to receive a 15-minute smoking break if she smoked, but no break if she did not. Unsurprisingly, she started smoking in order to get the break. Smoking probably caused her macular degeneration later in life. You would think it would have shortened her life as well. But she lived to 99.5 years old and was mentally sharp that entire time. She was coveted in Trivial Pursuits, especially in the category of History. Her team often won as she had lived through so much history.

She was surprised that she needed hundreds of thousands of dollars for her retirement. When she was younger, she only needed $4 to buy a week’s worth of groceries. She thought only the Rockefellers had hundreds of thousands of dollars. But market returns gave her that amount of money, and inflation made it so that she needed it. Any less money and she might have outlived her money.

Planning for a long life is especially important for women and even more so when the female partner is many years younger. The older spouse may have sufficient assets, but the younger wife may not have enough money to live well into her 90s. If the male partner spends too much and dies young, he may impoverish his wife.

Although on average women live longer than men, it isn’t always the wife who is the last to die. Both my wife and I lost our mothers at a younger-than-average age, but my father is 96 years old and my father-in-law is 93 years old.

Nerdwallet has an article entitled “Should You Save Enough to Live to 100? ” They call it “nuts” to use 100 as a planning age. They quote one financial planner who instead uses “average life spans for those with average health.”

But average ages for longevity don’t take into account the average deviation of longevity.

Here are the odds of dying each year: 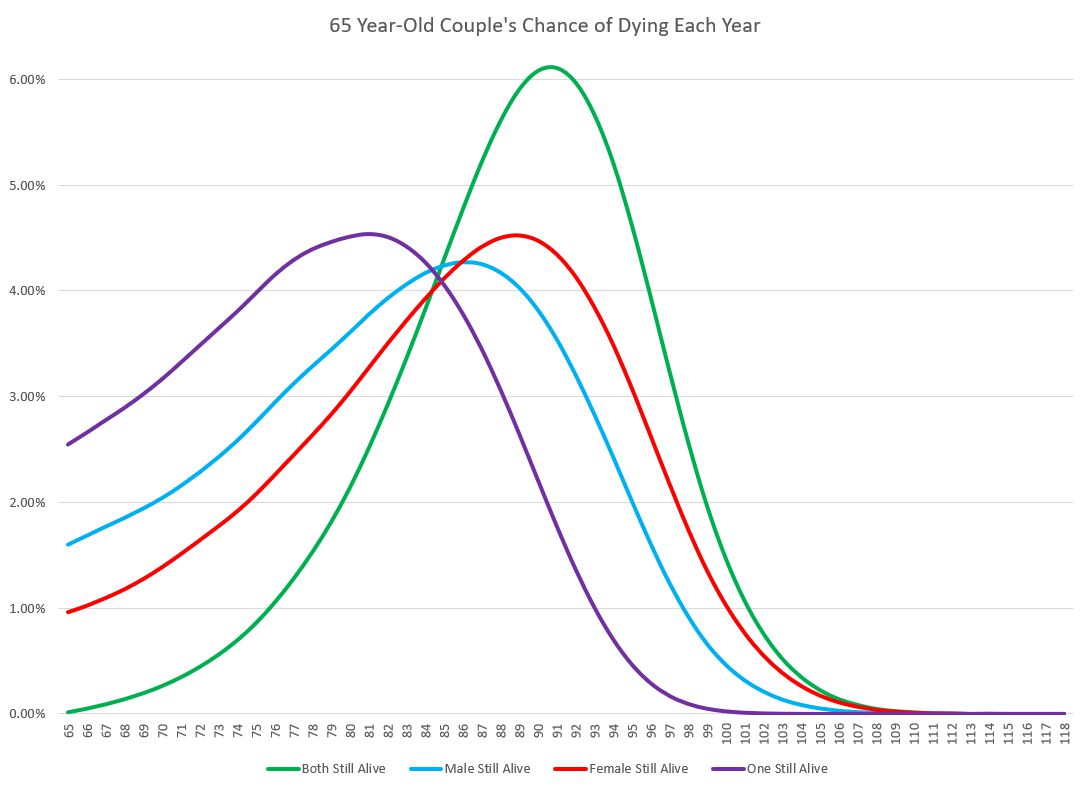 If one spouse passes away at 75 another may live to be 95.

And these are just the averages. We have found that the longevity of our clients is above average.

The more you engage in financial planning, the longer you live. There is nothing magical about financial planning or financial planning clients. A longer life is one of the privileges that comes with having sufficient money. If nothing else, the demographic on average has money for healthy eating, lives in a neighborhood where you can’t hear gunshots from your bedroom except during hunting season, and can afford life-saving medical care or good health insurance. Not everyone is similarly privileged.

A perpetual portfolio in retirement is unnecessary. Studies suggest that, even with more technological advancements, humans won’t be able to live forever. God and nature seem to agree: Our life spans appear to be fixed at a limit of about 120 years.

In our own experience recently, we had a call scheduled with a client’s child and power of attorney (POA) to talk about what the plan would be when the client ran out of money. The client’s account was being depleted from monthly withdrawals, and she only had about six months remaining. The call was scheduled for a Tuesday, but on Monday we received notice that the client had passed away over the weekend. The client was just 69 days shy of her 104th birthday. We were so glad that the client had sufficient assets throughout her long life.

We can be fooled by films today into thinking that people get knocked out with one punch or die easily. While we can die suddenly, we are resilient and may last much longer than we think. Planning like you are going to continue to live is usually the best course of action. After all, which is worse: Being destitute while still alive or dying happy and provided for with a little extra?

By default, plan for age 100. Dying young is not a retirement plan.