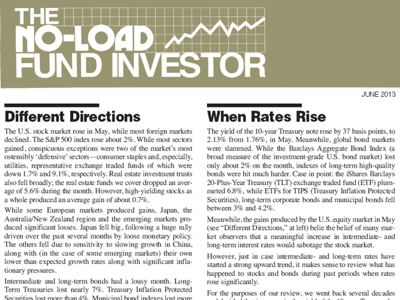 The U.S. stock market rose in May, while most foreign markets declined. The S&P 500 index rose about 2%. While most sectors gained, conspicuous exceptions were two of the market’s most ostensibly ‘defensive’ sectors—consumer staples and, especially, utilities, representative exchange traded funds of which were down 1.7% and 9.1%, respectively. Real estate investment trusts also fell broadly; the real estate funds we cover dropped an average of 5.6% during the month. However, high-yielding stocks as a whole produced an average gain of about 0.7%.

While some European markets produced gains, Japan, the Australia/New Zealand region and the emerging markets produced significant losses. Japan fell big, following a huge rally driven over the past several months by loose monetary policy. The others fell due to sensitivity to slowing growth in China, along with (in the case of some emerging markets) their own lower than expected growth rates along with significant inflationary pressures.

And in “When Rates Rise” he wrote:

Meanwhile, the gains produced by the U.S. equity market in May belie the belief of many market observers that a meaningful increase in intermediate- and long-term interest rates would sabotage the stock market.