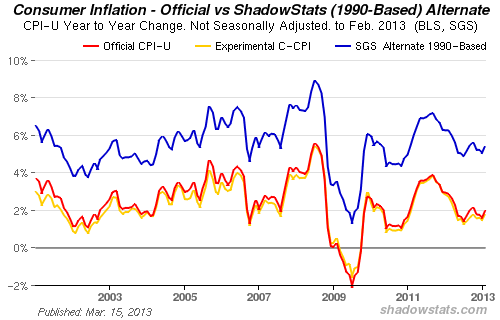 In Better to Bank with Cyprus Than the United States? we wrote, “In 1996 the government began measuring inflation differently, lowering the reported number significantly.” For financial planners, getting accurate information on inflation and cost of living increases is very important. That data is used through the planning process. And yet that data has not been accurately reflected in the CPI index for some time now.

Walter J. “John” Williams runs the ShadowStats.com site where he does analysis behind and beyond government economic reporting. This information is from his site describing the difference in methodology and the reasons and results of the biased government reporting for public policy and personal financial planning:

Have you ever wondered why the CPI, GDP and employment numbers run counter to your personal and business experiences? The problem lies in biased and often-manipulated government reporting.

Individual use of a CPI measure generally is tied to personal financial decisions or planning, in terms of wage or income growth/adjustment, contract or benefit price adjustments and/or in terms of targeting financial returns that will stay ahead of inflation.

Accordingly, I contend that individuals look to the government’s CPI as a measure of the cost of living of maintaining a constant standard of living, as well as measuring that cost of living in terms of out-of-pocket expenses.

While the CPI at one time was the measure desired by the public, government efforts turned the CPI away from measuring the price changes in a fixed-weight basket of goods and services to a quasi-substitution-based basket of goods, which destroyed the concept of the CPI as a measure of the cost of living of maintaining a constant standard of living.

The use of hedonic quality modeling in adjusting the prices of goods and services has destroyed the concept of the CPI as a measure of out-of-pocket expenses.

As we wrote in our article, “We should probably be more wary of the constant gradual erosion of our dollars through inflation than the volatility of the stock market.” Talk to a fee-only financial planner today to learn what you should be doing to protect the buying power of your investments.