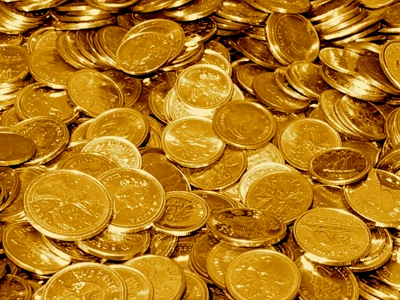 I receive a number of media requests each day and it is interesting to watch the trends. One of the current trends are questions about physical gold or silver as part of an investment strategy. Gold has a low expected return (about inflation) and a high volatility (much higher than the stock market) as well as a terrible tax treatment (it is taxed as a collectable at a 28% capital gains tax).

As a result,the optimum asset allocation to gold is 0% no matter what your risk preference.

Clients don’t always follow our advice, so we ask them to limit their investment in physical gold and silver to less than 3% of their portfolio. Again, calling it an investment isn’t really accurate. An investment is something that pays you money. Physical gold has no earnings, so the P/E ratio is infinite.

There’s a nice article in MarketWatch by Jeff Reeves entitled “Why Buffett thinks investing in gold is stupid .” Reeves simply chronicles Buffett’s statements in interviews over time and what has happened subsequently. For example,

Perhaps my favorite take on gold investing comes from Warren Buffett, the iconic investor behind Berkshire Hathaway. Delivered at Harvard in 1998, it goes a little something like this:

“(Gold) gets dug out of the ground in Africa, or someplace. Then we melt it down, dig another hole, bury it again and pay people to stand around guarding it. It has no utility. Anyone watching from Mars would be scratching their head.”

The idea is simple: There is no use for gold.

Or more importantly, holding gold does no value or service to the world. Value is created by producing something or some service. No additional value is produced by holding something of value and not making any money from it. An investment is something which pays you money.

In most of Buffett’s quotes he contrasts gold with some company which is working hard to produce value for consumers, for example:

More recently, in 2009, he echoed these thoughts in a CNBC interview. He was asked, “Where do you think gold will be in five years and should that be a part of value investing?”

“I have no views as to where it will be, but the one thing I can tell you is it won’t do anything between now and then except look at you. Whereas, you know, Coca-Cola (KO) will be making money, and I think Wells Fargo (WFC) will be making a lot of money, and there will be a lot — and it’s a lot — it’s a lot better to have a goose that keeps laying eggs than a goose that just sits there and eats insurance and storage and a few things like that.

For the record, gold was around $900 then, and has tacked on about 45%; Coke stock is up 100% and Wells Fargo is up 200%. That doesn’t include dividends, or subtract the cost of ownership that Buffett points to.

If on average precious metals appreciate with inflation, stocks on average appreciate about 6.5% above inflation. Here is another Buffett quote from Reeves’ article:

Another great line from Warren Buffett about gold came in October 2010, when he told Ben Stein:

“You could take all the gold that’s ever been mined, and it would fill a cube 67 feet in each direction. For what it’s worth at current gold prices, you could buy — not some — all of the farmland in the United States. Plus, you could buy 10 Exxon Mobils (XOM), plus have $1 trillion of walking-around money. Or you could have a big cube of metal. Which would you take? Which is going to produce more value?”

Gold is right back to where it was in late 2010 when that interview aired, at around $1,350 an ounce. Meanwhile, XOM stock is up 35% not counting dividends, and farmland continues to appreciate at a rapid rate. (For instance, one report says Iowa farmland just jumped 17% in six months.)

If you are interested in reading more articles about the difference between precious metals (which we do not recommend) and resource stocks (which we do recommend) see our collection of articles on “Gold, Silver and Resource Stocks.”