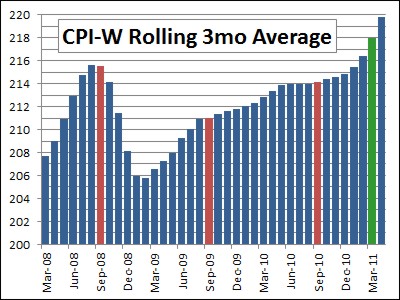 The Cost-of-Living Adjustment (COLA) for the past two years was 0.0%. The COLA legislation was passed in 1973 to ensure that Supplemental Security Income (SSI) benefits would keep pace with inflation. Many other entitlements plus private- and public-sector employee salaries and benefits have become attached to the annual COLA computation.

Every organization that uses the federal computation for a COLA has not adjusted salaries automatically. With unemployment running at 8.7%, most workers are just grateful to have a job.

Understanding how COLA works uncovers some of the complex cause and effect between Social Security adjustments and the real cost of living with higher gasoline prices.

Gasoline prices in 2008 rose from $89 per barrel to peak that July at $145 per barrel. Near the height of oil prices, the COLA for December 2008 was determined. The annual COLA is based on the increases in the Consumer Price Index for Urban Wage Earners and Clerical Workers (CPI-W). The Bureau of Labor and Statistics calculates it monthly.

Immediately after this computation, many of the largest financial institutions found themselves too highly leveraged and in desperate need of cash to avoid bankruptcy. Suddenly no one wanted barrels of oil and everyone wanted cold hard cash. Oil fell precipitously, reaching a low of $37 a barrel in January 2009.

No one wanted shares of stock either, and the markets fell too. Diversification seemed to fail because what moved was neither oil nor stocks. What moved was the value of a dollar. Everyone wanted dollars to deleverage and avoid bankruptcy. Everything fell as a result of being valued in expensive dollars. The market dropped in half over six months. Oil fell to a quarter of its value.

Monthly averages for CPI-W have to rise above the 2008 average of 215.495 before another COLA adjustment will be made. So far the first four months of this year have exceeded the 2008 average. Much of this increase has been as a result of rising gasoline prices.

I was asked recently to compute a COLA for an organization whose fiscal year ends June 30 instead of December 31. To determine a COLA effective in June, simply use the average of the first quarter’s CPI-W instead of the third. For organizations using this midyear measurement, a COLA increase of 2.4% is finally warranted.

Rising energy prices are not a reason for the president to take action in the Obama administration any more than they were during the Bush years. Oil is finding its market value and adjusting due both to the recovering economy as well as the easing of the monetary situation.

Our strategic oil reserves are best reserved for a more strategic time. They should only be tapped in times of embargo or war when markets are no longer free.

In the meantime, make sure your portfolio is prepared for inflation, a dropping dollar and rising interest rates. Keep your bond durations short. Diversify your bonds among U.S. and foreign, developed and emerging markets, and total return and inflation protected.

Also, invest about 17% in hard asset stocks. Hard asset investments include companies that own and produce an underlying natural resource. Examples of these natural resources include oil, natural gas, precious metals (particularly gold and silver), base metals such as copper and nickel, and other resources like diamonds, coal and lumber. These companies act as an inflation hedge in your portfolio.