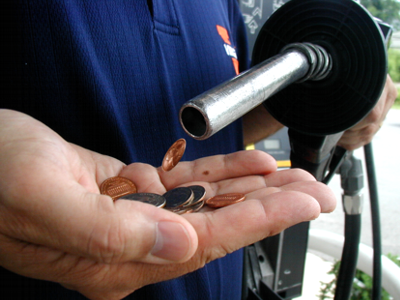 Last month the Obama administration announced it would release 30 million barrels of oil, the largest ever, from the U.S. Strategic Petroleum Reserve. Only those without an understanding of basic economics would applaud such a move.

In a recent column I wrote, “Rising energy prices are not a reason for the president to take action in the Obama administration any more than they were during the Bush years. Oil is finding its market value and adjusting due both to the recovering economy as well as the easing of the monetary situation.”

Tapping the Strategic Petroleum Reserve should only be an option in times of embargo or war when markets are no longer free.

In 2008, oil prices rose from $89 per barrel to peak at $145 per barrel. The media blamed rising energy costs on the Bush administration with regular calls for the president to “do something.” But there was nothing for President Bush to do then or for President Obama to do now.

Much of the criticism by conservatives contradicts basic economics. Blaming Obama continues the fantasy that presidents should be able to control the price of basic commodities such as oil. That is not something governments ought to do. Nor is it something they do well when they try.

Yes, the government can reduce the price of oil by suddenly releasing 30 million barrels from our reserves. But it does not help the United States in any way. Even if it reduces the price of gasoline by 10 cents a gallon and saves the average consumer $6 a month, it does so over the entire world, not just in our country.

Oil is bought and sold on a world market. It is just as reasonable to say we released our 30 million barrels of oil to China and the resulting drop in the price of oil allowed us to buy Venezuelan oil at a discount.

It doesn’t really matter where our country buys its oil. Foreign oil burns just as well as domestic oil. So long as a free market exists for oil, the market will price oil appropriately. And the only effect of releasing our oil reserves is to lower world oil prices.

The United States was once the number-one consumer of oil. But China now accounts for 20.3% of global demand compared to only 19% for the United States. So although the American consumer paid the bill for the entire release of oil, 81% of our largess benefited foreign countries. No wonder a new poll shows Obama remaining so popular overseas.

The timing seemed driven more by falling poll numbers than rising gas prices. The release came as retail gasoline prices fell for the 20th consecutive day to $3.61 per gallon according to the AAA Daily Fuel Gauge Report. Prices were already about 21 cents lower than they had been. As this article goes to press, the current price is $3.587, showing little, if any, reduction on account of the release.

Some justified the release as a response to lost oil supplies because of the turmoil in Libya. But that happened in February. Plus Libya only represents 2% of the world oil supply, and just 6% of its oil production was disrupted. Furthermore, only 5% of the Libyan production is actually sent to the United States.

Finally, releasing government oil reserves is not “producing oil.” Oil companies produce oil to make a profit for their shareholders. The way to reduce prices in the long term is by removing the economic disincentives to producing oil, mostly the federal government’s excessive regulation.

Instead, the current administration rails against oil companies for their obscene profits, showing they do not understand basic economics. The oil companies make big profits partly because they are huge companies and not because their margin is large as a percentage of revenues. Their profits also increase because the value of the dollar is falling.

The profits of oil companies are tied to the resources they own. And they own a commodity that is resistant to a falling dollar. This is one reason to invest in hard asset stocks: they are highly leveraged against inflation or a devaluation of the currency. It is ridiculous for the current administration to devalue the currency and then complain oil companies have higher profits. Nor is it fair to rail against so-called Big Oil. After all, it is you and I who own Big Oil.

Obama has called for ending oil subsidies that have been in place since the early 20th century. Over the next 10 years these will be worth $18 billion. But oil companies pay about $140 billion annually in royalties and corporate income taxes. And they pay billions more in regulatory and compliance costs.

Let’s follow the money to understand the consequences. Currently the oil companies get these subsidies as tax breaks. They either keep the money and shareholders get the money in increased dividends or they lower the cost of energy and consumers reap the benefits. If the government collects those taxes, neither shareholders nor consumers benefit. There are simply higher prices and lower earnings. 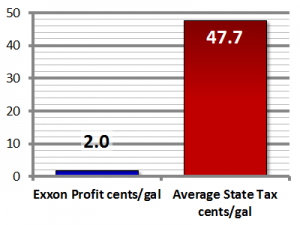 So while we are arguing about Big Oil’s subsidies of $18 billion over 10 years, no one seems concerned about Big Government’s windfall taxes of $24.4 billion every year.

Perhaps the best strategy for the average investor is to vote for lower taxes on oil companies and make sure your own allocation to Big Oil is more than your gasoline expenses.

Exxon Mobil (XOM) has earnings of $7.04 per share. If you owned 370 shares, your share of the earnings would be $2,600 a year or enough to put $50 of gasoline in your tank every week. That amount of XOM would cost you about $38,400. At $10.30 of earnings per share, you would only have to buy 253 shares of Chevron (CVX) and spend $24,800. Because Exxon Mobil is the largest holding in the S&P 500 and Chevron is the fourth largest holding, you may have a lot more Big Oil in your portfolio than you realized.

Anyone with more than these amounts of oil companies in their portfolio would do better to cheer Big Oil’s profits and vote for increased tax reductions. We should keep the strategic reserves for a real emergency.