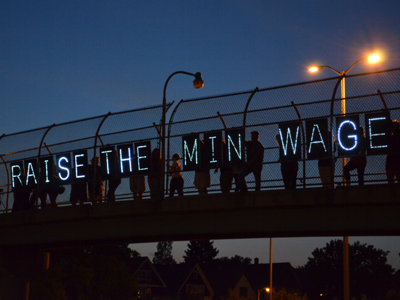 The most honest thinking on both sides is correct.

Less than 2% of the workforce works for the minimum wage. About a quarter of these workers are ages 16 to 19 (younger employees are not even counted in the labor statistics). Another quarter of those on minimum wage are under age 25. So a full 50% of those working for minimum wage are younger than 25. They typically live with their parents, have little or no education and only work part time.

About 60% of minimum wage earners are in the leisure and hospitality industry, primarily in food and beverage services. Many receive tips and commissions that supplement their hourly wages.

To understand why minimum wage hurts the most disadvantaged, imagine the people who can’t get hired at a job paying minimum wage or higher. They have not had a job in the past year. Many have never held a job. Their communication skills are inadequate; they have not taken advantage of educational opportunities. They have not learned to follow instructions or show up on time.

Like playing a sport, working for pay is a skill learned by doing. Training a new employee is costly, not just in salary, but also in the time and effort required to train and supervise, correct mistakes and perhaps suffer a loss of business because of poor service. Some first-time workers are not worth minimum wage. But without being hired, they can’t learn job-related skills.

Let’s remember how many millionaires began working at or below minimum wage. My own first forays into the world of work included the mail room, shipping department and library. Landing a first job is challenging. With minimum wage, teenagers have a hard time getting hired at a part-time hourly job. I started working at age 15 and found my employers couldn’t pay me until the end of the summer when I turned 16. Both of my children were eager to do start working the summer after they turned 14. As a result they learned the job skills necessary to command higher salaries at a relatively young age. Working teenagers are increasingly rare.

Young people should learn how to earn money. But few teenagers seek summer employment because of the lack of available jobs, even at minimum wage. To raise financially savvy children, parents should help their kids find employment at the youngest possible age. Teenagers with work skills and experience become attractive future employees.

Here’s some advice for teenagers. First, you need a good command of English. It’s fine to be bilingual or use slang with school friends, but for most jobs you must know how to speak to adults. Parents can help if you are willing and invite such correction. Employers won’t bother; they just won’t hire you.

Second, learn to get there on time and prepared to work. On time means five minutes early, not thirty seconds late. Too many employees arrive late or fail to appear at all. If you are late and your replacement is now on the way, when you finally show up you will be sent home or fired. Showing up consistently is a prerequisite for being given a raise.

Third, take improving and educating yourself seriously. If you don’t take advantage of the opportunities you have to improve your education and skills, why should you expect anyone else to offer them?

Finally, learn to follow both the letter and the spirit of instructions. Employers need employees who will not only follow directions but also understand the intent behind them and be able to interpret correctly what additional steps are needed. Learn when to ask for clarification and when to think for yourself and not bother the boss.

The skills and life lessons that teens learn in early work situations can create just as much if not more satisfaction and self-confidence than doing well in school. And the experience will inspire them to put more effort into their education.

For those well-intentioned people who believe the minimum wage ought to be raised, they are really saying we ought to make it illegal to provide employment for those whose work skills do not yet justify a higher wage. They mistakenly assume that everyone is worth more than the minimum wage. I would challenge them to start a business and hire disadvantaged minority teenagers with poor English skills and little education or work ethic for their first job, pay higher than minimum wage and still try to run a business.

Real employers find that for a wage higher than minimum they are able to employ better quality employees. They can bypass the bottom 10% of teenagers and 1% of adults, leaving them unemployed. Making it illegal to hire these less skilled workers only hurts the less skilled workers. And without their first job, they will find it difficult to develop the job skills necessary to gain better employment.

Minimum wage and below is not a living wage. It is rather a starter job rate for those who lack the skills necessary to earn a living and have a career. Few work at such a level for more than a year. In fact, few work even at their first job for such a salary. But for those who have failed to take advantage of life’s opportunities, jobs at or below minimum wage give them yet another chance to apply themselves and prove their work worthy of a higher salary.