A 2007 study by Harris Interactive found that 55% of all Americans die without a will.  In legal parlance, dying without a will is known as dying ‘intestate.’  So who gets your stuff if you die intestate in Virginia?

Rumor has it that the state automatically takes all of your assets if you die without a will.  This can happen, but rarely does.   In the commonwealth of Virginia, your assets go to your next of kin.  (This assumes that you actually leave behind an estate worth something after all your debts, taxes and final expenses are paid.)  Only if there are no living relatives –which is hard to imagine—then, Virginia is the taker in default.

Of course, it is better to make a will and leave your assets to whom you wish explicitly (the state of Virginia doesn’t know if you’re emotionally close to your brother but estranged from your sister).

It can be tricky to figure out who your “next of kin” is, so here’s a handy flowchart to help you figure out who gets everything you leave behind if you don’t have a will. 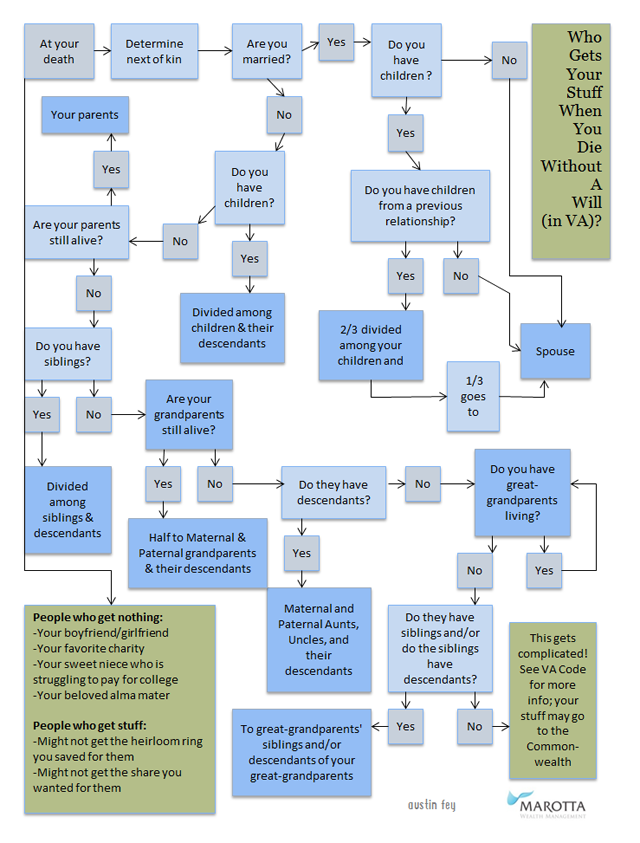 Published in 2007, Harris Interactive® for Martindale-Hubbell® conducted a research study finding that for the last three years, 55% of all adult Americans do not have a will. Only one in three African American adults (32 percent) and one in four Hispanic American adults (26 percent) have wills, compared to more than half (52 percent) of white American adults.

For the legal explanation and more information, see the Virginia Code.