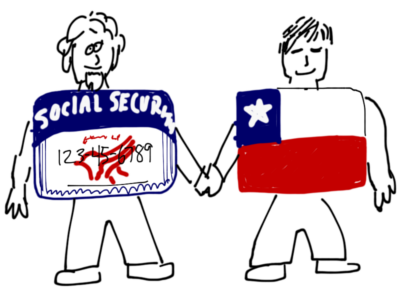 Both economists and reasonable citizens understand that reforming our Social Security system is inevitable. Over 30 years ago, Chileans reformed their own national pension system with great success. This so-called Chilean model offers many lessons to American citizens who hope for a financially secure future.

At my recent visit to the Bogleheads conference, one of the most hotly debated topics concerned whether Social Security should be counted as a bond when creating your asset allocation. Because the discounted value of the future stream of Social Security payments can range from $600,000 to $1.2 million for a couple, the lump sum categorization is not trivial.

The argument for inclusion goes that if you add an additional $1 million (from Social Security) into the bond side of your portfolio, many investors should become much more aggressive with their personal 401(k) and other retirement accounts. Unless you have an additional $1.5 million entirely in stocks, you won’t even be able to achieve a 60/40 split if you count your Social Security payments as a $1 million bond.

The related question that I find more interesting is whether it sounds crazy to anyone else to invest such a large sum of money in a portfolio of US Treasury bonds. In this regard, the allocation to bonds is not just a thought experiment. The Social Security Trust Fund is required by law to invest its proceeds in US Treasuries that currently have an average maturity of 7.305 years and an after-inflation yield of around 2%.

These traditionally safe investments have very little upside potential. Bonds underperform when interest rates are rising. And with historically low interest rates, many experts reasonably expect returns from the bond markets to be below average for the foreseeable future.

Investment underperformance will only cause the financial stresses on Social Security to become more severe. Social Security’s costs continue to exceed the income created by the bond portfolio, and reserves are now expected to be depleted by 2033. Social Security’s Disability Insurance (the DI of OASDI) trust fund is in even worse shape and is expected to be depleted in 2016. Unless adjustments are made to the system for those under age 50, seniors will be forced to cut back. Payroll tax revenue only covers 77% of scheduled benefits.

Both the accounting and financial market realities suggest it is time for Americans to reform our national pension system. Specifically, we should pay special attention to the Chilean model that was instituted after the country emerged from its own pension crisis. Will our own political elites have the foresight to make adjustments to our own system before the entire system breaks down? The longer we wait, the more painful the process.

In 1981, Chilean labor minister José Piñera replaced his country’s bankrupt pay-as-you-go social security system with a system of private accounts that now offers over 30 years of evidence to those who questioned this move. A recent study by Dictuc, a consultancy affiliated with the Catholic University of Chile, revealed that Chile’s private retirement accounts have provided workers with an 87% salary replacement rate. This new system offered returns six times more than would have been received under the old system.

Some question whether workers’ pensions should be subject to the risks of the market. The Chilean example reminds us that the risks of short-sighted politicians, no matter how well-intentioned, are far more dangerous.

A recent example illustrating how easy it is for politicians to pick the pocket of a national pension plan came in the form of the 2010 Tax Relief Act that offered a so-called tax holiday for payroll taxes in 2011 and 2012. The effect of this “holiday” was to reduce revenues to struggling Social Security by $222 billion during that two-year period. Don’t expect to see any proposals to repay those dollars.

In Chile, workers are required to save 10% of their income into their pension system. This compares to 12.4% in which US employees contribute 6.2% from their salary and the employer matches with 6.2%. The self-employed contribute the full amount. Chilean employers are not compelled to contribute, but some do to beef up compensation packages or to create matching funds.

The Chilean system offers a limited number of investment funds that are all scrutinized to keep costs low and make sure that managers are following best practices. The Chilean pension also allows individuals to contribute additional funds to their own accounts. The system is simple and offers a healthy return on invested capital.

Many other countries have made reforms along the lines of the Chilean model. Australia’s superannuation pension system of personal accounts was created in 1992 to address the huge demographic shifts seen on the horizon for all developed countries with declining birthrates. Many people now consider the Australian pension system to be one of the strongest in the world.

Instead of discussing true reforms that will serve many future generations, American politicians dither about dishonest changes to the way CPI is calculated for our seniors. Will we ever get legislators with enough foresight and political savvy to bring about true reforms?