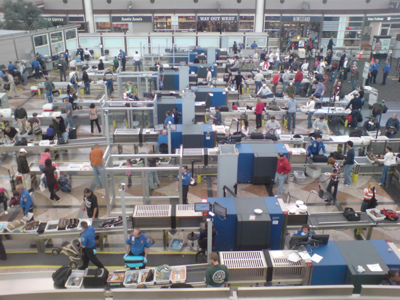 The last time a bomb exploded on an airplane in the United States was in 1967. The plane landed safely with no injuries. The last bombing with fatalities was in 1962.

In the 1970s, the gist of several hijackings was an armed man who asks the pilot to land, deplanes the passengers and crew, then steals the plane.

In response, the Federal Aviation Administration in 1972 instructed airlines to install more airport security than just the sky marshals they’d been using. For decades, airports used metal detectors to search passengers and luggage, and hijackings were foiled.

Until the Transportation Security Administration (TSA) came along after 9/11, metal detectors were the preferred security equipment. About 5,700 pieces of security equipment valued at $184 million purchased by the TSA now sits in its warehouse never having been used. The chief financial officer says the warehouse holds only 5% of the value of all the equipment owned by the agency.

The backscatter x-ray was originally made by Rapiscan Systems. According to their website, “A narrow pencil tip sized beam is directed toward subject, X-rays are backscattered from subject to detectors which receive the backscatter signal or X-ray reflectance. In this manner, the backscatter signal of each point on the body is measured and recorded in the digital computer.” The beam is “ionizing radiation” known to be carcinogenic even in small doses.

An American Medical Association study found that four additional cancers would occur from 1 million people being scanned 520 times a year. In 2012, 813 million passengers who originated their flights in America and countless pilots, flight attendants and airport personnel were subject to TSA security.

The backscatter images show precise anatomical details of the individual being screened. Each machine costs $180,000. These machines were ordered in 2009 and used until the end of 2012. During that time, the images produced were displayed for an onsite TSA officer to review. Passengers grew outraged that pictures of their essentially naked bodies were revealed to an agent in a separate room. As a result, the TSA required onsite privacy guards. Rapiscan announced they couldn’t comply in January 2013, and 76 machines were removed. As of the beginning of this year, 174 machines still remain.

The Millimeter Wave Scanners were made by L-3 Communications for $200,000 each (a metal detector costs $5,000 each). In 2009, when the machines first came out, the “Today Show” did a live demonstration of the machine. After sending two volunteers through, the producers decided the images needed to be censured to show on television.

The current millimeter wave scanners were reported as unable to detect a handgun hidden in an undercover agent’s underwear. The Scanners’ failures are demonstrated on many YouTube videos. Even Adam Savage of Mythbusters says he accidentally went through security with two 12-inch steel razor blades in his pocket.

As security guru Bruce Schneier says, though, “Complete effectiveness is not the goal; the checkpoints just have to be effective enough so that the terrorists are worried their plan will be uncovered.” However, there hasn’t been a study yet where the TSA successfully stopped over half of testers’ weapons or explosive materials.

If the TSA were a private security firm, they would have been fired by now.

According to How Stuff Works, a German study revealed the false-positive rate is 54%. Over half of the anomalies reveal no real concealed object.

The Waking Times states that the long-term exposure to millimeter wave scanners “could lead to nerve and/or muscle pain, chronic fatigue syndrome and contribute to autism, leukemia, cancer and heart disease.” Short-term effects are commonly “sluggishness, malaise, or feeling unwell, poor digestion, headaches, confusion, or a burning feeling in the skin or body.”

No terrorist has been captured as a result of a TSA body scan.

Although the technologies the TSA uses may change, their presumption that they should radiate passengers and can invade their privacy does not change.

If you opt out for health safety or privacy reasons, you must be subject to a “routine physical patdown.” In any other situation, this handling of another human is grounds for sexual assault. Sometimes, the passengers are so humiliated and violated, they take it to court. Within the first few year of its implementation, the patdowns inspired multiple lawsuits to be filed, even though the process is particularly arduous.

Among them was Jesse Ventura, suing the TSA for “warrantless, non-suspicion-based offensive touching, gripping and rubbing of the genitals and other sensitive areas of his body.” He suspected being singled out because of his disability related to his hip replacement. The violation of children, the disabled and minorities in the patdown procedure is so prevalent that the TSA has devoted several sections of their website just to try and save face on the issue.

The hundreds of YouTube videos and articles depicting TSA violation are distressing. They range from a three-year-old boy whose father asks him to pretend the patdown is OK to a humiliated female passenger ridiculed by agents after they publicly exposed her breasts. The most heartbreaking is a six-year-old wheelchair-bound girl sobbing, “I don’t want to go to Disney World!” after the TSA screeners asked to pat her down while withholding her stuffed animal “Lamby,” even after it had already been screened.

In 2012, TSA agents ironically detained Sen. Rand Paul, their biggest critic, when he refused to submit to a patdown. That June, Paul asked a TSA representative to justify the invasive physical patdown of his constituents’ children. The agent responded, “In terms of the patdown of the six-year old, of course that is something done based on intelligence gathered around the world not in terms of a specific individual.”

Thankfully, several small airports across the country still have traditional metal detectors including Charlottesville, Virginia. If you are flying this week, refuse the body scanners on your return flight as part of Thanksgiving Opt-Out Week. Think of it as a “take back the flight” protest.

For the best treatment and largest protest, make sure they perform their patdown in public. If you are bold enough, have a friend film it to avoid misconduct.

The TSA is the butt of many jokes, and yet so many of us complacently accept their existence. Although none of us alone has the power to out these oppressive procedures, together our frustration will force change.

Opt out this Thanksgiving.