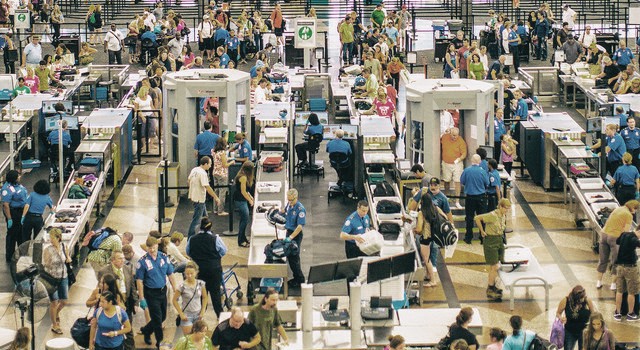 In late 2013, we wrote two articles about the Transportation Security Administration (TSA) and the agency’s propensity to violate and irradiate passengers while still failing to secure airlines. It is important for us not to forget that this relatively new government agency still could and should be abolished.

The invasive nature of the TSA has been well documented by many articles, videos, and opinion pieces.

Angela Rye, a CNN political commentator and NPR political analyst, was randomly selected for additional screening and experienced a mandatory government groping. In the video , it appears as though the TSA agent is purposefully not being gentle.

I think it is important to not sugar-coat the process of a stranger pressing on genitals with any TSA euphemisms. It is not a pat-down. It is a sexual battery offense by any state’s legal definition. It should not be allowed — let alone required — for any adult. It should definitely not be allowed for children.

John Stonestreet relates a recent experience with his 13 year-old daughter at the hands of the TSA which would be labeled child molestation in any other context.

Numerous groups and figures have called for the abolition of the TSA in its current form by persons and groups which include Sen. Rand Paul, (R-KY), Rep. John Mica, (R-FL), The Cato Institute, Downsize DC Foundation, FreedomWorks, and opinion columnists from Forbes, Fox News, National Review, USA Today, Vox, The Washington Examiner, and The Washington Post.

The TSA’s critics frequently cite the agency as “ineffective, invasive, incompetent, inexcusably costly, or all four” as their reasons for seeking its abolition. Those seeking to abolish the TSA have cited the improved efficacy and cost of screening provided by qualified private companies in compliance with federal guidelines.

Five years ago we wrote, “Whenever people are given the type of power and control assumed by the TSA, that power will be abused, repeatedly, until either their power or yours is taken away.” Now we learn that the TSA has a “secret watchlist for troublesome passengers.” And “troublesome” according to the TSA’s policies can include simply being offended about being molested.

None of this protects the public. A study by the OIG found that TSA screeners failed to detect weapons at an alarmingly high rate . All of this effort and intrusion has been rightly called security theater, intended to move public emotions rather than securing airplanes.

As explained in an Atlantic article :

Jason Harrington, a former TSA agent, explained in Politico the everyday ridiculousness of the job, a fact that all agents simply accepted as a fact of life. Yes, TSA agents are ogling or making fun of your naked physique in the full-body scans. … Yes, the body scans are ineffective and can be easily manipulated. … So despite being invasive and annoying, the TSA still has some major problems in its security.

But Harrington recognizes the job’s clearer purpose — to create the illusion of security.

As reported in Vanity, it has been shown that “all those security measures accomplish nothing, at enormous cost .”

With a budget of $7.6 billion, the TSA costs as much as replacing four World Trade Center buildings every year.

Critics have tried documentaries, skepticism, filming, humor, and t-shirts, but the agency is still in existence.