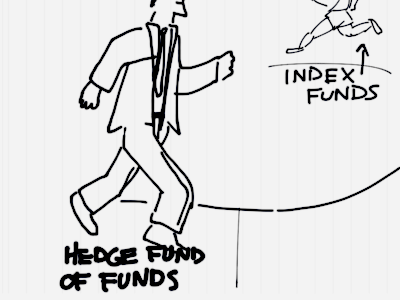 Mr. Buffett must be feeling quite good about his highly publicized wager with the hedge fund industry. For five of the last six years, the simple index fund has outperformed the so-called expert hedge funds, and his competition is starting to feel the heat.

Here’s the text of Buffett’s wager: “Over a ten-year period commencing on January 1, 2008, and ending on December 31, 2017, the S&P 500 will outperform a portfolio of funds of hedge funds, when performance is measured on a basis net of fees, costs and expenses.”

The last phrase in this wager, “when performance is measured on a basis net of fees, cost and expenses,” is the reason why Buffett expects to win. As with any investment strategy, the odds of success go down as your fees increase. And funds of hedge funds have some of the highest fees in the entire industry.

Buffett’s not trying to bludgeon all active investing strategies (that would require self-defamation). Rather he’s specifically targeting the ones that layer excessive fees. Buffett shares, “A number of smart people are involved in running hedge funds. But to a great extent their efforts are self-neutralizing, and their IQ will not overcome the costs they impose on investors.”

On the other side of this bet is Protégé Partners LLC. Protégé offers as impressive a group of executives as you will find. One managed “private family fortunes,” not wealth—but fortunes. Another began his career under the tutelage of the great David Swenson of the Yale endowment. You get the picture. But all of their credentials can’t change the fact that their hedge fund picks have underperformed the S&P 500 Index in each of the last five years.

Avoiding high fees and a warning against blindly following all-star managers aren’t the only lessons. In theory, it’s hard to imagine a better timed start to this wager from the perspective of the hedge funds. Had Warren Buffett known that 2008 would see a 37% drop in the S&P 500, the biggest one-year drop since the Great Depression, surely he would have delayed. Yet the downside protection strategies used by the hedge funds were less effective than most would hope for. That same year, the hedge fund portfolio in this wager was down 24%. Adding distress to this dismal performance, many high-profile hedge funds froze or severely limited their distributions during this period. When trading in publically priced and traded securities, you always have the ability to quickly liquidate your position; not so with hedge funds. Taken as a whole, hedge fund investors experienced little if any consolation during the financial crisis compared to the general investing public.

As the financial markets have rebounded, these same hedge funds have been left in the dust. All the strategies that try to limit the downside also limit the upside to the performance of hedge funds.

Another worthy observation about this bet is that Buffett hasn’t put his own investment reputation on the line. The wager would be much more interesting if Berkshire Hathaway (BRK.A) stock was entered in this horse race, but Buffett’s too intelligent to risk it. Losing with index funds is one thing. Denting a solid gold investment reputation is quite another.

When the wager was first placed, Buffett put his odds of winning at 60%. That’s a far cry from a sure bet, but as an avid bridge player, Buffett likes playing the odds. And he’s certainly not worried about losing the money, which goes to charity. Investing is about playing the odds. The markets don’t go up every year, but they do most of the time. Those who play these probability games know that the longer you play with the odds in your favor, the more likely you are to win. Successful investors are willing to take risks with low-cost investments that put the odds in their favor.