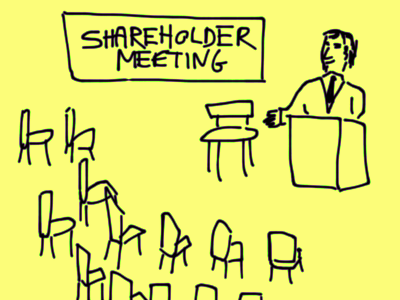 Most annual shareholder meetings are nothing more than a required dog-and-pony show. I recently attended insurer Genworth’s, which was no exception. It made me think of several improvements that could be made to make these meetings better serve investors.

As I said in my last take on shareholder meetings, it’s important to attend at least one per year because as the real owners of the companies in our portfolios, we need to remind executives of who they are really supposed to work for. Sure, you can vote your shares by proxy, but the company meeting is a reminder for management that shareholders are real people. It’s a shame that most of these events are so scripted and dull.

I went to the Genworth Financial meeting because their headquarters is close to where I live. This year’s gathering was similar to the last one that I attended two years ago. Of the 50 people in the room I would guess that less than 10 were not employees whose attendance was required which is not very much for a financial company with tens of thousands of shareholders.

Behind the executive panelist table, the first three rows were mostly full of men in dark suits who are either current or pending directors waiting for election. Shareholders were left to find seats behind this cadre of fraternal directors and executives.

One highlight was that I was able to meet Kent Conrad, a former U.S. senator from North Dakota, who I respect for his strong advocacy for a balanced budget and support of the Simpson-Bowles plan. I hope Conrad’s election to the board is a nod toward commonsense fiscal discipline for Genworth, rather than an example of the revolving door between Washington and corporate America.

The rest of the room was sparsely filled. The sandal-wearing guy sitting across the aisle from me had toenails painted pink on one foot and blue on the other. This mostly confirmed my belief that most shareholder meeting attendees are typically crackpots. You should attend one just for the fun of people watching.

After calling the meeting to order, both the chairman, James Riepe, and the chief executive officer, Thomas McInerney, read a scripted management presentation, looking up occasionally to make eye contact. Chairman Riepe emphasized the new energy that McInerney, who just joined the company in January, brings to Genworth. Both men stressed their uncontroversial focus on increasing shareholder value.

After verbally patting each other on the back, they opened the polls for voting. I admit I was a bit surprised that I was the only one in the entire room that raised my hand to receive a ballot. Everyone waited quietly as I placed my votes for the proposals for director, executive compensation (a say on pay), and the ratification of their preselected auditor.

I assume that all the others in the room were either Genworth employees or other stockholders who had previously voted via the proxy process or chose not to vote. I think that if you’re going to take the time to attend the shareholder meeting, voting in person is a good way to stay involved.

After the voting, the results were announced. In typical fashion, all directors were reelected, the executive compensation plan was approved as was the auditor.

Then the chairman opened the floor for questions. The room was dead silent for what felt like a couple of minutes before I raised my hand. I came prepared to ask a question if no one else in the audience participated.

“You have mentioned several times in your remarks that improving shareholder value is your foremost priority,” I said. ” Given that there are hundreds of thousands of Genworth shareholders and only a handful in attendance today, does this concern you? And if so, how would you suggest this be improved?”

Chairman Riepe, replied that investors now have other methods of receiving information through quarterly conference calls and regular news reports. Without saying so directly, Riepe implied that the annual shareholder meeting is an unnecessary vestige of corporate antiquity. Most of the dark suits in the room all nodded their heads in agreement.

I was unhappy with his response. The reason for an annual shareholder meeting has little to do with the effective dissemination of earnings data. These financial updates are a foreign language to the average investor. And who could expect to learn anything new about a multinational corporation from a five-minute prepared speech? However, I had already handed the microphone back to the assistant and didn’t have the chance to respond.

Executive managers are supposed to serve their shareholders, but too often this role is reversed. According to an annual New York Times study, executives earned 42 times more than average workers in 1980. Today, they earn 354 times the average rank-and-file worker. Jack Bogle, founder of Vanguard Funds, argues that executive managers and directors have been “feathering their own nests” rather than looking out for the interests of their shareholders.

The main reason an annual shareholder meeting remains necessary is to build a healthy relationship between shareholders and executive managers. In the great companies, managers view shareholders as business partners. This requires that these two groups are able to look each other in the eye and acknowledge the important role that each party plays. This can be difficult if the CEO and chairman need to look over a wall of directors and executive managers in order to see a handful of shareholders.

The chief executive officer, Thomas McInerney, was a bit more engaging on this issue. Newly installed in January, he expressed that he was committed to see the company do a better job of reaching out to its shareholders. I hope he maintains this commitment.

As these companies stretch to move from good to great, I suggest they also consider their efforts to reach their investors. I have a few suggestions that might make the annual shareholder meeting a bit friendlier to the average investor.

Instead, most executive teams will continue to offer a halfhearted attempt to engage with their shareholders. This less-is-better approach does not create the type of synergy necessary to support great companies.