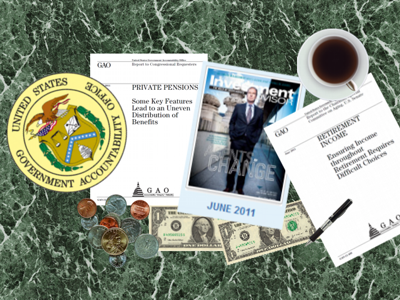 I have rarely agreed with the Government Accounting Office (GAO) and their assumptions of the effect of legislation on tax collection and the economy. This is mostly because in an effort to make them “less political” they are required to assume that there are no unintended consequences of government policies.

I have always given the GAO the benefit of the doubt and assumed that they were filled with honest and intelligent people who were constrained by Congress to provide poor answers. That opinion has, however, sunk much lower as a result of two studies they have done.

First I read this in and article in Investment Advisor magazine by Melanie Waddell entitled Experts Dispute GAO Study That 401(k)s Only Benefit the Wealthy:

The study reports. “For those fortunate enough to be covered by a pension, there is a concern that much of the tax benefits flow to higher income employees, and in many instances the financial constraints on lower wage workers limit their ability to contribute to tax-qualified plans and thus, to benefit from those subsidies.”

But Graff argues that “when you measure who gets the tax benefits from these plans, the impact on moderate income workers becomes clearer.” Households making less than $50,000 pay only 8% of all income taxes, he continues, “but receive 30% of all the tax incentives associated with defined contributed plans.”

In other words, Graff says that for every dollar of income taxes paid by lower income workers, they get almost four dollars back in tax incentives. “That’s a good deal by any measure,” Graff argues, saying it shows that tax incentives are effectively and efficiently targeted at low- and moderate-income families.

The GAO’s primary job is to make sure that federal money is spent appropriately and that the country handles its finances well. But when you give power to the government, even just the power of a bully pulpit, special interest groups will push that power to say what they want them to say.

Not only has the GAO criticized 401(k)s (which you own and control) they have gone on to say the best method to have safe spending in retirement for middle-class retirees is to convert at least half of your retirement savings into a lifetime income annuity (where you give up ownership and control).

The best argument for the Libertarian position is simply to watch the caliber of wisdom, integrity and thrift that you get with centralized planning. My only explanation for such foolishness is that the GAO is corrupt and at this point is simply a mouthpiece for the insurance industry.

My second example of the less-than-stellar wisdom of the GAO comes from a Financial Planning magazine article by Temma Ehrenfeld entitled GAO Recommends Retirees Invest in Annuities, Delay Taking Social Security which reads in part:

In a new report from the Government Accountability Office (GAO), experts recommended that middle-income retirees convert a portion of their savings into an inflation-adjusted annuity or opt for an annuity instead of a lump sum from an employer sponsored defined benefit (DB) plan. They also recommended that Americans delay taking Social Security benefits until at least full retirement age.

But that’s not what most Americans are doing, the report also found.

Only 6% of Americans retiring with a 401(k) or other kind of defined contribution (DC) plan chose or bought an annuity at retirement from 2000 to 2006.

The other 94% are lucky that the government still leaves them the freedom to make their own choices. If you find annuities enticing, watch our video and read our articles on annuities before locking yourself into a poor choice. If the GAO were giving you investment advice they would suggest that you not participate in your 401(k) and convert at least half of your retirement savings into an annuity laden with fees and expenses. That is lousy advice.

It is lucky that the GAO doesn’t run the country the same way it gives financial advice, otherwise our country would be seriously in debt.