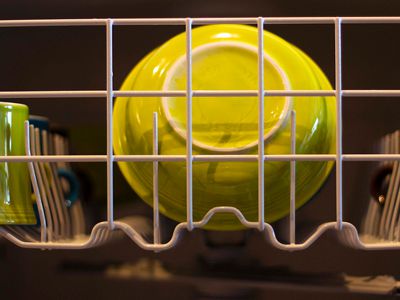 My husband and I just bought a house and are now moving from a one-bedroom apartment to a 3-bedroom house. Having lived in college housing for most of my independent adult life, the dishwasher is a relatively unfamiliar appliance. Throughout my childhood, my family used it sparingly, perhaps running it once a week, and cleaned pots, pans, measuring cups, and cutting boards by hand. My husband’s family ran the dishwasher more frequently, putting everything that could fit inside. I’m a frugal person, so I thought I’d look to see what was cheapest and best for my dishes. I found several ideas are worth sharing.

The first step to saving is knowing the cost of your options. Hot water is the biggest cost of washing dishes and also the hardest to price. Some suggest that washing by hand and the dishwasher use the same amount of water, but there are clearly variations based on method.

In order to sterilize dishes and kill the bacteria, you need to bathe them in water hotter than your skin can tolerate. To do this best and with the least pain, wear rubber gloves and soak the dishes which directly touch your mouth, like silverware and glasses, in the hot water while you wash the other dishes. Also, Molly of Gizmodo recommends sterilizing your sponge by microwaving it for 30 seconds. This method could easily use 6 gallons of hot water between filling the sink and rinsing the dishes, which costs $0.12 in hot water.

Because this technique requires a lot of water, energy, and effort, most people do not wash dishes in this manner. Instead, they clean a whole batch of dishes by continuously or semi-continuously running tolerably hot water, scrubbing and then rinsing each dish. An average dinner could produce 20 – 40 minutes worth of dishes. If you are running hot water for the duration, at 3 gallons per minute, you could easily be paying $1.17 – $2.34  in hot water over the course of those 20 – 40 minutes.

However, there are methods of hand washing which save more water. Paul Wheaton made a video of one method of hand washing dishes which he claims uses only 1 gallon of water. One gallon of hot water costs about $0.02 in water and electricity. 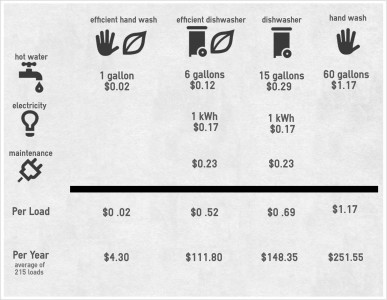 That being said, dishwashers have been estimated to use anywhere from 6-15 gallons of water (3 gallons of water if it recycles). That translates to $0.12 – $0.29 for both the cost of water and the cost of heating that water (or $0.06 if it recycles). Dishwashers also have the added cost of the electricity required to power the dishwasher. It takes approximately 1 kWh per load, which translates to $0.17 per load in energy. This would result in one load in the dishwasher costing, at the high estimation, $0.29 + $0.17 or $0.46.

Katie at Kitchen Stewardship in “Food for Thought: The cost of using your kitchen’s appliances” suggests that the cost of your dishwasher might be cheaper if your energy comes from gas. Now in Charlottesville, the cost of natural gas is $1.25/therm, which makes a dishwasher cost approximately $0.15 per load in energy and approximately $0.09 – $0.15 per load of hot water ($0.01 per gallon of hot water used) when run on natural gas. That would suggest that a natural gas powered dishwasher costs $0.30 per load instead of the $0.46 per load of electric. Something to look into.

Unlike hand washing, dishwashers inevitably have a finite lifespan. Trent Hamm of The Simple Dollar points out the maintenance and replacement costs in “Saving Pennies or Dollars? Dishwasher or Hand Washing” saying:

This site estimates the lifespan of a mid-range dishwasher as being approximately 10 years and having a cost of $500. That adds up to $50 per year. This report estimates that an average dishwasher runs 215 loads per year, so you’d have a cost of about $0.46 per load for the cost of the dishwasher.

Edit: As one diligent reader pointed out, Trent Hamm’s logic is sound although his final division is off. $50 per year divided by 215 loads per year should be approximately $0.23 per load, not $0.46. This edit has been made throughout the rest of the article.

The average replacement cost of a dishwasher is $500. So assuming that each load wears the dishwasher down equally, that adds a $0.23 fee to every load of dishes.

If you’re talented, effective, and happy hand washing, then feel free to keep going. There are long term potential savings to be had. If you like Wheaton can only use 1 gallon of hot water hand washing, then over the course of a year an average family could save $107.50 per year trying his hand washing method. However, if you are an average hand washer, you could be charging yourself $103.20 per year plus labor opportunity costs. Or it could be worse, if you give your even more inefficient young children the chore of hand washing the dishes.

Personally, if someone offered to consistently and effectively clean my entire batch of dishes for $0.69 per load, I would take him up on it in a heartbeat. Turns out my dishwasher offers just that, if not a slightly better deal. It’s just a shame that some things can’t go in the dishwasher and others you might need before the dishes are fully loaded.

Pre-scrape more than pre-rinse. Everybody has their opinions, but most agree that you should at least scrape off your dishes since that will minimize the junk that would get stuck on your dishes or in your dishwasher. Furthermore, if you put the plug in the drain and then put the dishes in the sink before putting them in the dishwasher, normal sink-use like washing your hands will help to pre-rinse your dishes without wasting any extra water. Truth be told though at the end of the day, you should test your dishwasher to see what it can handle. The danger of not pre-washing is, if your dishwasher has a heated dry cycle, you could burn on food your dishwasher couldn’t get off that would have otherwise been easy to rinse off. If there is not a heated dry cycle, the only other danger is, you might have to run some dishes through again or wash them by hand. The only foods that commonly need to be rinsed off are melted cheese and egg.

Fill, but don’t overfill, your dishwasher. Running a 15 gallon dishwasher to clean two place settings and a pot is both inefficient and could potentially break your dishes. However, packing your dishes really tightly has the danger of leaving the dishes dirty in addition to potentially breaking them. If you’re waiting to clean your dishes until the perfect fill level, you could find yourself with a dishwasher full of bug-attracting odors. Some, like Martha Stewart, suggest running a “Rinse-Hold cycle” (1-4 gallons of water) in such a case to let your dishwasher pre-rinse your dishes if you have a small number of smelly dishes. However, Consumer Energy Center suggests that you avoid such a cycle like the plague because of its waste of hot water. At the end of the day, I’d suggest packing your dishwasher well, to avoid breakage, and then running the cycle whenever having the dishes clean or odorless is worth $1 to you.

Read the detergent instructions. Read the bottle on your detergent, which normally has a recommended amount on it, and read your dishwasher tray, which also often has fill lines based on different conditions. However, if you really want to calculate the amount of soap you need to use, it depends on the dirtiness of your dishes and the hardness of your water. The provided cups or recommended amounts are based on heavily soiled dishes with very hard water. If you have pre-rinsed your dishes and have soft water, you could use half the amount of detergent and don’t need to put any in the pre-rinse section.

Run the garbage disposal first. As WikiHow says, “Dishwashers often drain into the same pipe as the sink, so it’s important that the pipe be clear.”

Beware the humidity of air drying. Choosing air drying over the dishwasher’s heated dry is considered a money saver, since instead of paying for your dishwasher to heat your dishes dry you use the natural free air. The only problem is that most air conditioners try to remove humidity from the air, which means that where you’re saving money on the dishwasher you’re spending money on the air conditioning. There almost no way to calculate this savings or lack there of, but if you’re running your dishes at night, when your AC tends to get a break, then the extra humidity of either air drying your dishes or just running them will be easier on your wallet.

Run your dishes at night. There are many reason to do it. The Kitchn lists three good reasons for delaying the cycle until after you’ve gone to bed. 1. The humidity is better handled by your AC when there isn’t as much natural humidity in the air. 2. You can avoid the sound because you’re sleeping. 3. It can be cheaper. The cost of your energy consumption varies a bit based upon the time of consumption, because some utility companies arrange their pricing so peak hours cost more, either by charging a variable transportation fee or just adding a demand charge.

Hand wash wood, knives, delicate glasses, non-stick, and cast iron. According to Apartment Therapy, wood swells and cracks, knives dull, non-stick is washed away, and cast iron loses its seasoning in the dishwasher. Martha Stewart adds bone, bronze, aluminum, rubber, and disposable plastics to the list and also says, “DON’T mix sterling or silver-plate and stainless-steel flatware in the dishwasher, even when using the Rinse-Hold cycle. A reaction between the two metals can damage both finishes.”

Clean the traps. According to The Kitchn, your dishwasher has a trap down under the lower sprayer. Sometimes this is removable for cleaning other times you need to clean it with a towel. Either way, regularly clean out the food bits that didn’t make it down the drain to maximize cleaning and minimize tempting bugs. 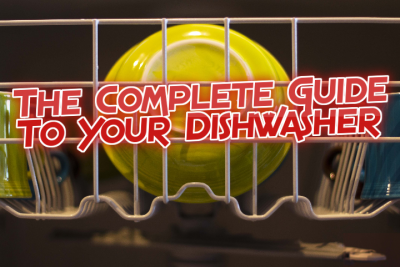