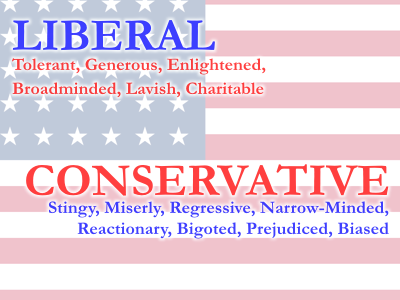 Let me be clear: I believe that Democrat political candidates should have the right to be as miserly and stingy as they wish with every dime they earn. I also believe that the right to privacy ought to extend to Presidential candidates and include their tax returns and medical records just as it includes their sexual partners. But the Democrats have vilified productive income and cast it in a narrative of greed and avarice. Their politics of personal destruction against Mitt Romney is as morally wrong as it is factually incorrect. They do this to deflect attention from more significant matters (such as this, this or this). And since a large percentage of the American voters don’t take the time to do the analysis, here are the facts.

In my column, “Romney’s Tax Return Suggests He Paid 57.9% in Taxes and Gifts to Charity” I wrote:

What I failed to include in this analysis was the fact that the Romneys purposefully left $1.8 million in donations off their 2011 tax return in order to voluntarily pay more taxes. (Articles here and here have covered it.) With this factored in the Romney’s paid $12.6 million in taxes and gifts to charity, keeping just 32.4% of what they produced.

Adding this generosity into the income shown on their tax return (and not counting the guesstimate of corporate income/taxes) produces this analysis of their generosity as a percentage of their discretionary income after taxes:

Giving 40.2% of your discretionary income is unusually generous. One might think that the Democrat candidates would at least be above average. But you would be wrong.

In March of 2008 a Bloomberg article by Ryan J. Donmoyer and Julianna Goldman entitled “Obamas Donated Less Than 1% of Their 2000-2004 Income” reported:

Democratic presidential candidate Barack Obama and his wife Michelle gave $10,772 of the $1.2 million they earned from 2000 through 2004 to charities, or less than 1 percent, according to tax returns for those years released today by his campaign.

The Obamas have since gradually increased their giving after having made their tax returns public. The Bidens have also increased their charity, but in their case they have gone from stingy to deducting giving some old clothes to Goodwill at exorbitant prices. Here is the Bidens’ income and giving summary from the last 12 years: 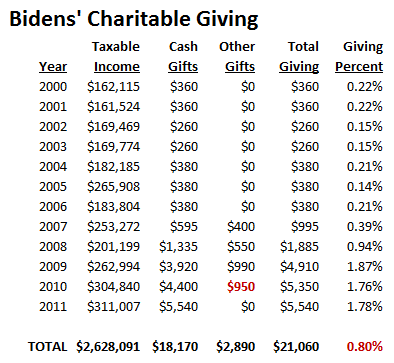 For someone earning over $250,000 their charitable giving (0.80%) does not indicate a warm and generous heart. Their gifts other than cash all seem to be bags of used clothes given to Goodwill and deducted at questionable rates. Here is the record for the 2010 deduction of $950:

I don’t think taking $200 or $300 off of your taxes every time you take a bag of ratty underwear to Goodwill is in either the letter or the spirit of the tax code. Yet that is exactly what Hillary Clinton did while Bill Clinton was the Governor or Arkansas going so far as to deduct $2 for used underwear donated to charities according to the New York Times analysis. The following year the Clinton’s did not itemize their $17,000 to avoid any additional embarrassment.

And not to be left out, Al Gore’s 1997 federal tax return showed a meager $353  charitable donation on an adjusted gross income of $197,729 as reported in “Gore’s Charitable Giving Raises Some Eyebrows” which read in part:

I would assume that he would want to do something to demonstrate that he was being socially responsible through his giving … Stacy Palmer, managing editor of the Chronicle of Philanthropy, told the Times.

The vice president’s office responded by urging that the Gores be judged by their history of giving, not just the dollar figure from one years tax return. Aides also said some donations could not be claimed on the form, including church contributions and Mrs. Gores donations of food and clothing to the homeless.

Contributing financially to charitable organizations is certainly noble and should be encouraged and is something that the Gores have done when the resources were there, said Chris Lehane, a spokesman for the vice president. However, to truly judge a person’s commitment to helping others, you need to consider what they have done with their lives and how they have spent their time and by that standard the Gores are extraordinarily committed.

I’m sure Al Gore was thinking nice thoughts while he wasn’t giving any money.

All this confirms Arthur C. Brooks’ research that he reports in his book, “Who Really Cares: The Surprising Truth About Compassionate Conservatism”

We all know we should give to charity, but who really does? In his controversial study of America’s giving habits, Arthur C. Brooks shatters stereotypes about charity in America-including the myth that the political Left is more compassionate than the Right. Brooks, a preeminent public policy expert, spent years researching giving trends in America, and even he was surprised by what he found. In Who Really Cares, he identifies the forces behind American charity: strong families, church attendance, earning one’s own income (as opposed to receiving welfare), and the belief that individuals-not government-offer the best solution to social ills. But beyond just showing us who the givers and non-givers in America really are today, Brooks shows that giving is crucial to our economic prosperity, as well as to our happiness, health, and our ability to govern ourselves as a free people.

Let me be clear again: I believe that Democrat political candidates should have the right to be as miserly and stingy as they wish with every dime they earn. I also believe that the right to privacy ought to extend to Presidential candidates and include their tax returns and medical records just as it includes their sexual partners.

But the hypocrisy of candidates who pretend to be generous with other people’s money while purposefully characterizing those who are actually generous destructively is an issue worthy of consideration when you vote.